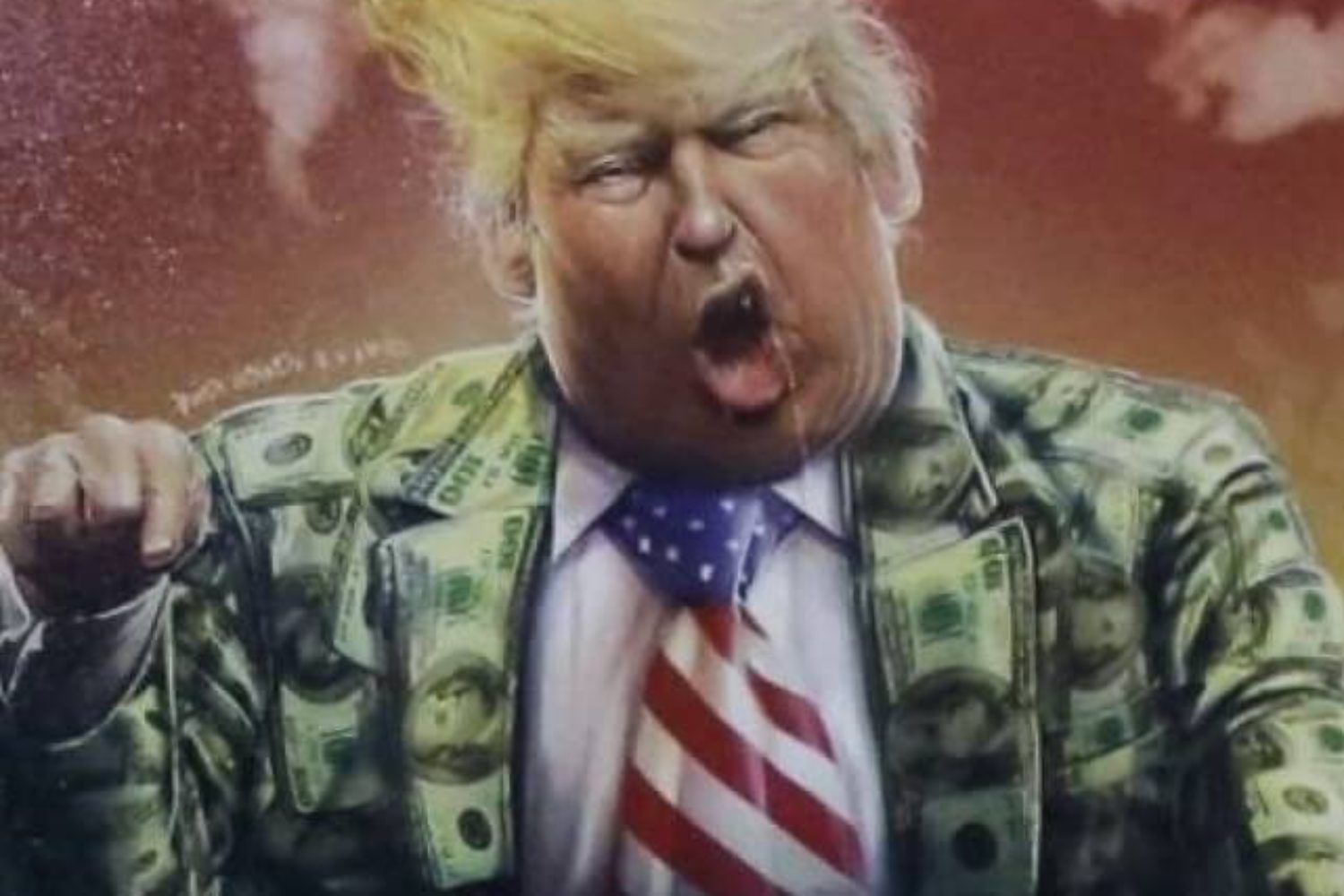 image above: Winning entry of this year’s International Trumpism Cartoon and Caricature Contest in Tehran.

WN: The article highlighted below shows two impulsive leaders, Trump and Saudi Prince Muhammad bin Salman, to be hell-bent on fanning the flames of the Middle East, and thereby the planet.

A headline in the German online Der Spiegel recently identified a set of two international players as well, Trump and North Korean leader Kim Jong-un, thus: “The Two Crazies With the Bomb”¹. The gist of the article below the headline is that both leaders outdo the other in unpredictability! But this is not an inconsequential game of Chicken that little children play to pass the time. This game has potentially literal earth-shattering consequences. And the two puerile “prick-wavers” blithely threaten mass murder while the rest of the world holds its breath, for fear that untold millions could have theirs forever snuffed out.

Has there ever been such colossal bufoonery, with stakes so high, in the history of the world? Nero fiddled while Rome burned. Trump tweets as stupidly while the world may erupt in conflagration of his (and US Empire’s) own making.
_________________
¹ You may read the article in German here.

Introduction to the essay: “The Enemy of My Enemy Is My…?
The Saudi-American-Iranian-Russian-Qatari-Syrian Conundrum“:

Every now and then something lodges in your memory and seems to haunt you forever.  In my case, it was a comment Newsweek attributed to an unnamed senior British official “close to the Bush team” before the invasion of Iraq in 2003. “Everyone wants to go to Baghdad,” he said. “Real men want to go to Tehran.” At the time, it seemed to distill a mood of geopolitical elation sweeping Washington and its crew of neocons. They had, of course, been beating the drums for war with Iraq, but also dreaming of a Middle Eastern and then a global Pax Americana that would last generations.  Less pithy versions of such sentiments were the coin of the realm of that moment.  New York Times columnist Paul Krugman, for instance, reported in March of that year that, “in February 2003, according to Ha’aretz, an Israeli newspaper, Under Secretary of State John Bolton told Israeli officials that after defeating Iraq the United States would ‘deal with’ Iran, Syria, and North Korea.”

Fourteen years later, the U.S. has yet to make its way out of its multiple Iraqi wars, is embroiled in a Syrian conflict, and as for North Korea, well, I could tweet you a thing or two about how Washington has “dealt” with that still-nuclearizing land.  And yet, it seems that, on one issue at least, those old neocon dreams may finally be coming to fruition.  We may at last have a “real man” in the White House, someone truly readying himself to “go to Tehran.”  At least the pressures from his political backers, his Iranophobic generals, and his CIA director are on the rise, and President Trump recently aligned himself very publicly with the Saudi royals in their anti-Iranian campaign, which seems about to kick into high gear.

If we had time machines and someone could head back to March 2003 to tell those neocons and the top officials of George W. Bush’s administration who that future “real man” might turn out to be, they would, of course, have laughed such a messenger out of the room in disbelief.  And yet here we are in comb-over heaven, in a land whose foreign policy is increasingly done by tweet, in a country whose leaders evidently can’t imagine a place in the Greater Middle East that the U.S. military shouldn’t be sent into (but never out of).  Meanwhile, the pressure, as TomDispatch regular Dilip Hiro, author most recently of The Age of Aspiration: Power, Wealth, and Conflict in Globalizing India, suggests in vivid detail, is only growing for a full-scale campaign for regime change in Iran, not to speak of a possible proxy war against that country in Syria.  And honestly, tell me — to steal a line from another TomDispatch author — what could possibly go wrong? Tom

At the same time, the incorrigibly contradictory Trump has not abandoned his wish to cultivate friendly relations with Russia whose close economic and military ties with Iran date back to 1992. The danger inherent in the rich crop of contradictions in this muddle, and Trump’s fervent backing of the Saudis in their recent threats against neighboring Qatar, should be obvious to all except the narcissistic American president.

No one should be surprised by any of this once Trump inserted himself, tweets first, in the violent and crisis-ridden Middle East.  After all, he possesses an extraordinary capacity to create his own reality. He seems to instinctively block out his failures, and rushes headlong to embrace anything that puts him in a positive light. Always a winner, never a loser.  Such an approach seems to come easily to him, since he’s a man of tactics with a notoriously short attention span, which means he’s incapable of conceiving of an overarching strategy of a sort that would require concentration and the ability to hold diverse factors in mind simultaneously.

Given this, he has no problem contradicting himself or undermining aides working to find a more rational basis for his ever changing stances and desires on matters of import.  These problems are compounded by his inability to connect the dots in the very complex, volatile Middle East where wars are raging in Syria, Yemen, and Iraq, or to assess how a move on one diplomatic or military front will impact a host of inter-connected issues.

Like Loading...
Americans fully to blame, Middle East a powder keg that could engulf the world, The Greater Middle East worst place on planet, Trump and, Trump and Jong-un both are "crazies", two impulsive leaders fan global flames