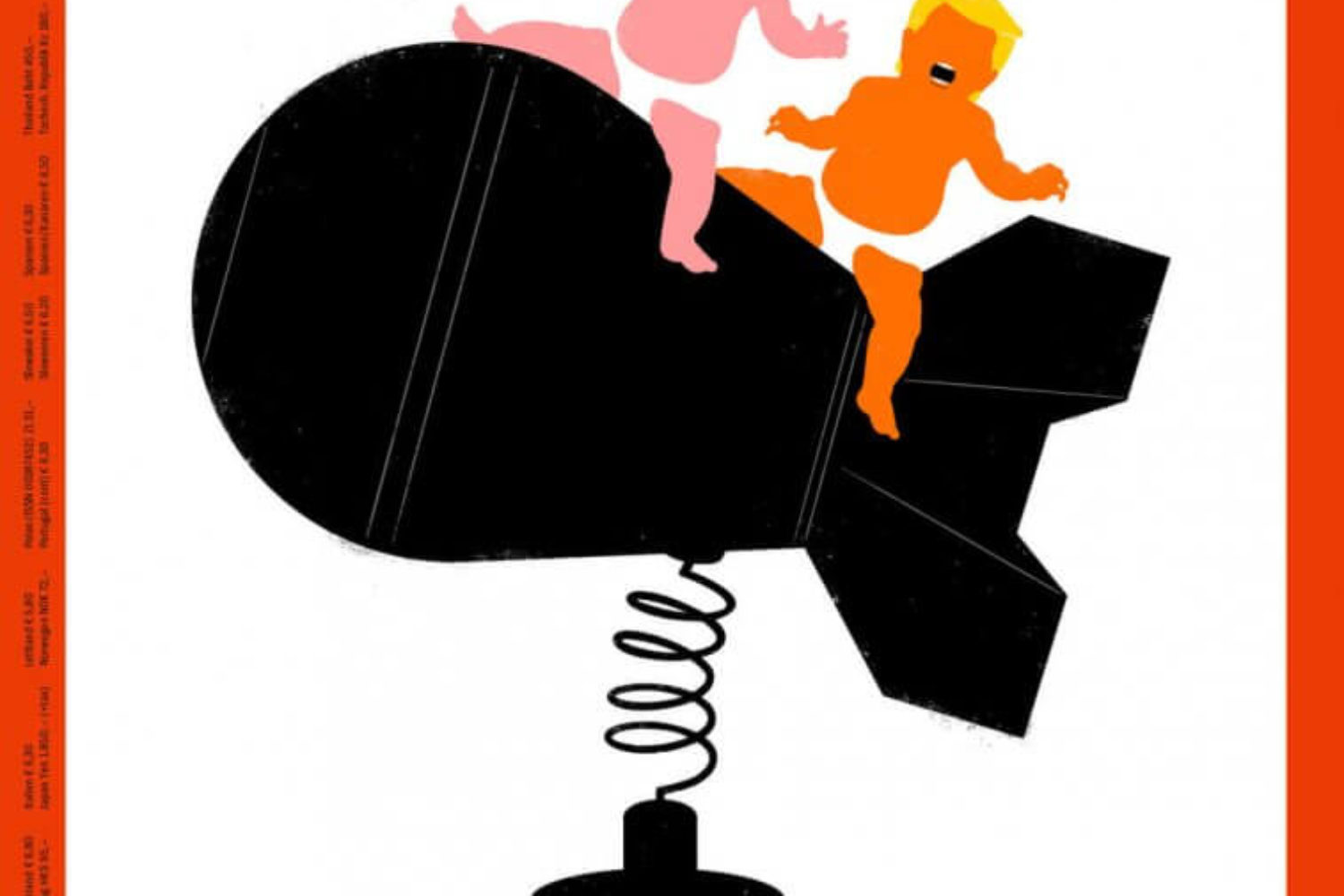 In previous nuclear standoffs, Trump’s predecessors knew when to hold back from further antagonising the other side. But now there is no such certainty

Illustration by The Spectator

WN: A few months ago, Germany’s Der Spiegel used an online headline about Trump and Jong un thus: “The Two Crazies with the Bomb”“. I commented on that here in another article about The Two Crazies, that also links to the German source. A more recent article cites

a group of psychiatrists, psychologists and social workers [who] wrote to the New York Times “that the grave emotional instability indicated by Mr. Trump’s speech and actions makes him incapable of serving safely as president.” In April, another group of mental health experts told a conference at Yale University’s School of Medicine that Trump was “paranoid” and “delusional” and referred to the president’s “dangerous mental illness.”

The illustration above is the front page of Der Spiegel for April 22, 2017, drawn by Edel Rodriguez¹. It delivers the same message — only this time it features Trump with the body of a toddler. His playmate, tottering next to him atop a primitive nuclear bomb-cum-kiddie ride—similar in design to the one the U.S. dropped on Nagasaki, effectively ending World War II—is none other than the North Korean ruler, Kim Jong un. The caption reads: “Game of Death: Donald Trump and Kim Jong un risk atomic war”.

What can one say more? Together they are the two most dangerous people in the world: lunatics beyond description. I tip my hat though to Jong un who is at least “rational”. He is fighting for North Korea’s survival. Trump is vying to enlarge even more his bloated narcissistic megalomaniacal ego. (Adjectives of this sort could be piled up indefinitely — with nary a legitimate contrary word!) It is all so sick. It is all so beyond-words ludicrous and treacherous.

As to “the world’s leaders [having] understood that these weapons have to be handled with the greatest delicacy.” (see excerpts below), it is colossal understatement. They need to be abolished — with the first and only atomic bomb mass murderers leading the way. Likely? They and the entire nuclear club refused to even enter into negotiations about the recent UN resolution — with 122 countries participating — to abolish nuclear weapons. Canada, a non-nuclear power, said they “will not address concrete measures to eliminate nuclear weapons,” according to a statement [July 7, 2017] from Global Affairs Canada. Thanks Justin! You do us proud — as you do about fossil fuels too.
_________________________
¹ An excerpt about Rodriguez hotkeyed above reads:

Rodriguez says he couldn’t stand it when many of his fellow citizens failed to take Trump’s stump speech promises, or bid for presidency, seriously. “So I started making outrageous images to spark people’s attention—to rile them up,” he said. “I wanted to communicate that, to me, Trump was like a comet heading towards Earth.”

Caption: THE END OF THE WORLD (as we know it)

When Trump was elected president, news outlets around the world responded with big, bold headlines. But it was Der Spiegel that hit the presses with a cover that stood out from the rest. The single compositionally simple illustration on the German magazine’s cover captured the international shockwave of uncertainty and fear that Trump’s election had set in motion. In it, an orange-faced, yellow-maned comet hurtles towards Earth, mouth wide open as if ready to swallow the planet whole.

This was the moment many Americans, along with the rest of the world, feared. This – precisely this – was what alarmed us most about the prospect of Donald Trump becoming president of the United States. Not that he would hire useless people or that he would tweet all day or use high office to enrich himself and his family or that he’d be cruel, bigoted and divisive – though those were all concerns. No, the chief anxiety provoked by the notion of Trump in the White House was this: that he was sufficiently reckless, impulsive and stupid to bring the world to the brink of nuclear war.

Of course, cooler heads might soon prevail. China might find the diplomatic back-channel that persuades North Korea to step back from the current clash with Washington. The Pyongyang regime might calculate for itself that, despite its latest threat to attack the US airbase in the Pacific island of Guam, further escalation risks its own survival. Or the generals that now flank Trump – John Kelly as chief of staff, Jim Mattis as defense secretary – might succeed in talking their boss down from the ledge.

But make no mistake. Trump’s remarks on Tuesday have pushed the US to the precipice of nuclear confrontation with North Korea. We have to hope that both parties will step back, but be under no illusion that the brink is where we stand. And Trump put us there.

The form of words the president used made the critical difference. Threatening Kim Jong-un with “fire and fury” was bellicose enough. But adding the words “the likes of which this world has never seen before” left no doubt that he was talking about a nuclear strike against North Korea.

It’s worth pausing to consider the obvious consequences of such an action. Seventy five million people live on the Korean peninsula. There are also 30,000 US servicemen and women stationed there. How many would die if Trump made good on his threat? And that is to reckon without further retaliation and escalation, as Russia or China unleashed their own nuclear arsenals. This is why all previous US presidents have used only the most sober language when speaking of North Korea. They have understood the human stakes. They have sought to reduce tension, not ratchet it up.

Now the situation is different. Trump’s “fire and fury” phrase could have come straight from Kim himself, who has previously threatened to turn Washington into a “sea of fire”. When the US political commentator Howard Fineman asked via Twitter, “Can a Twitter war with a juvenile dictator-madman lead to a nuclear holocaust?”, it was genuinely unclear whom he was referring to. Both sides in this conflict are now led by – how should we put this? – unpredictable men.

How Likely Is War? Please also see: Probably Not.
The point is that since the dawn of the atomic age the world’s leaders have understood that these weapons have to be handled with the greatest delicacy. Nuclear standoffs happen, but each side has always understood where the brink lies and was careful not to overstep it. That means, especially, understanding the need not to say anything that the other side might misinterpret as a cue for war.

Both Washington and Moscow understood that throughout the cold war; it’s what stopped the Cuban missile crisis turning into Armageddon. Most analysts believe the regime in Pyongyang, for all its brutality, understands that too: it is not suicidal. But the question hanging over the world today is one that has never had to be asked before: does the US president understand this most essential point, one on which the fate of the world depends?

Like Loading...
on the brink of nuclear war, Trump and Jong-un screaming at each other in the nursery atop a nuclear bomb that either could set off