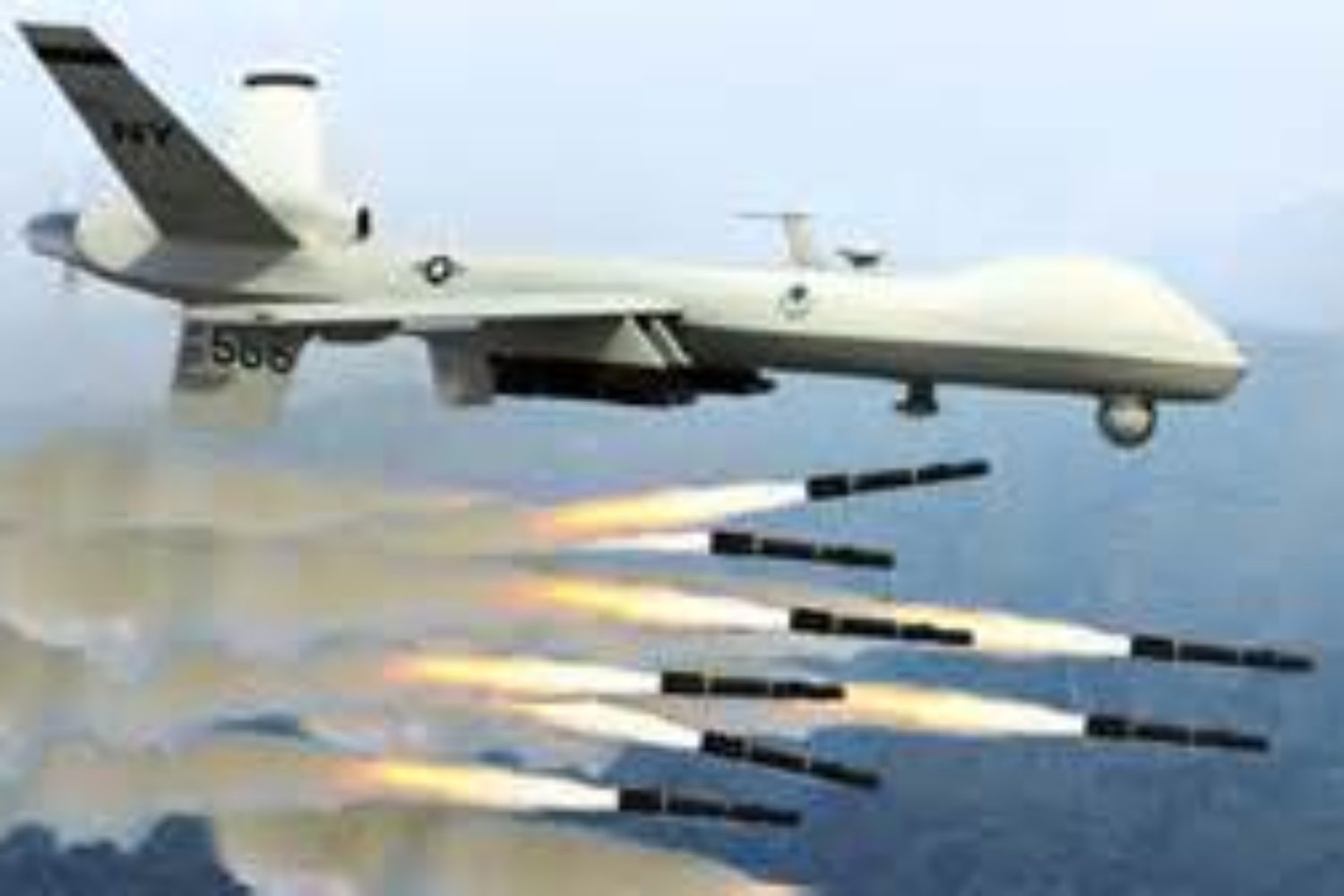 Photo above: US Predator drone

an excerpt: from the introduction to the piece by Tom Engelhardt:

Strangely, amid the spike in racial tensions after the killing of two black men by police in Louisiana and Minnesota, and of five white police officers by a black sharpshooter in Dallas, one American reality has gone unmentioned.  The U.S. has been fighting wars — declared, half-declared, and undeclared — for almost 15 years and, distant as they are, they’ve been coming home in all sorts of barely noted ways.  In the years in which the U.S. has up-armored globally, the country has also seen an arms race developing on the domestic front.  As vets have returned from their Iraq and Afghan tours of duty, striking numbers of them have gone into police work at a time when American weaponry, vehicles, and military equipment — including, for instance, MRAPs (mine-resistant ambush protected vehicles) — have poured off America’s distant battlefields and, via the Pentagon, into police departments nationwide.  And while the police were militarizing, gun companies have been marketing battlefield-style assault rifles to Americans by the millions, at the very moment when it has become ever more possible for citizens to carry weapons of every sort in a concealed or open fashion in public.

The result in Dallas: Micah Johnson, a disturbed Army Reserves veteran, who spent a tour of duty in Afghanistan and practiced military tactics in his backyard, armed with an SKS semi-automatic assault rifle, wearing full body armor, and angry over police killings of black civilians, took out those five white officers.  One of them was a Navy vet who had served three tours of duty in Iraq and another a former Marine who had trained local police for DynCorp, a private contractor, in Iraq and Afghanistan.  Meanwhile, civilian protesters, also armed with assault rifles (quite legal in the streets of Dallas), scattered as the first shots rang out and were, in some cases, taken in by the police as suspects.  And at least two unarmed protesters were wounded by Johnson.  (Think of that, in his terms, as “collateral damage.”)  In the end, he would be killed by a Remotec Andros F5 robot, built by weapons-maker Northrop Grumman, carrying a pound of C4 plastic explosive, and typical of robots that police departments now possess.

In other words, this incident was capped by the first use of deadly force by a drone in the United States.  Consider that a war-comes-home upping of the ante.  Already, reports the Defense One website, makers of military-grade robots — a burgeoning field for the Pentagon — are imagining other ways to employ such armed bots not only on our distant battlefields but at home in a future in which they will be “useful, cheap, and ubiquitous,” and capable of Tasing as well as killing.

Of course, among the many things that have also come home from the country’s wars, Predator and Reaper drones are now flying over “the homeland” on missions for the Pentagon, not to mention the FBI, the Border Patrol, and other domestic agencies.  So the future stage is set.  Once you’ve used any kind of drone in the U.S. to kill by remote control, it’s only logical — given some future extreme situation — to extend that use to the skies and so consider firing a missile at some U.S. target, as the CIA and the Air Force have been doing regularly for years in places like Afghanistan, Pakistan, Yemen, and Somalia. And of course, in our domestic arms race, with small drones commercially available to anyone and the first of them armed (no matter the rudimentary nature of that armament), it’s not hard to imagine a future Micah Johnson, white or black, using one of them sooner or later.  After all, Johnson was already talking about planting “IEDs” (the term for insurgent roadside bombs in our war zones) and a flying IED is a relatively modest step from there.

So, welcome to the “home front,” folks.  And speaking of drones, it’s worth giving a little thought to what might, in fact, still come home, to the sort of example that two administrations have set by turning the president into an assassin-in-chief and regularly creating law for themselves when it comes to the targeting of distant peoples.  In that light, TomDispatch regular Rebecca Gordon considers America’s Trojan Horse technology of death and just what it may someday smuggle into “the homeland.” Tom

an excerpt from the article:

By the middle of President Obama’s second term in office, criticism of this extrajudicial killing program, and especially of the civilian deaths involved, had mushroomed. So, in May 2013, at least 11 years after the program was launched, the president announced a shift in drone strategy, telling an audience at the National Defense University that the U.S. would engage in “targeted killings” of al-Qaeda militants only when there was a “near-certainty” that no civilians would be injured. He added that he was planning to make the drone program more transparent than it had been and to transfer most of its operations from the CIA to the Pentagon.

In the two years since, little of this has happened. Although Obama has continued the job of personally approving drone targets, the CIA still runs much of the program.

On July 1st, he did finally take a step towards providing greater transparency. The Office of the Director of National Intelligence issued a report stating that, outside of more conventional war zones like those in Syria, Afghanistan, and Iraq, U.S. airstrikes have killed “64 to 116 civilian bystanders and about 2,500 members of terrorist groups.” These estimates are, in fact, quite a bit lower than those supplied by the various groups that track such killings. Note as well that, legally speaking, not only the “collateral damage” victims, but all those that Americans identified as “members of terrorist groups” died via illegal, extrajudicial executions.

The document fulfills one of the requirements of a newly issued executive order, which, among other things, requires the government to release a report by May 1st of each year containing “information about the number of strikes undertaken by the U.S. Government against terrorist targets outside areas of active hostilities [i.e., outside genuine war zones]” for the previous calendar year.

Attached to the executive order was a “fact sheet,” which noted that one goal of the new executive order is to “set standards for other nations to follow.” How happy would the United States really be if other nations decided that they had the right to kill anyone who scares them? How would the United States react if Syrian President Bashar al-Assad decided to take out a U.S. general or two, on the grounds that, since the U.S. is supporting forces that seek to depose him, those generals are (as the Fact Sheet puts it) “targetable in the exercise of national self-defense”?

Some critics of the Obama drone program have welcomed the executive order, which does include a new emphasis on protecting civilians. But the larger effect of the order is to make the practice of illegal assassination a permanent feature of U.S. policy. It assumes that we can expect an annual murder toll announcement for years to come. No future is contemplated in which the United States will not be raining death from the sky on people who cannot defend themselves. The drones will continue to fly, but the Trojan Drone’s work is complete.