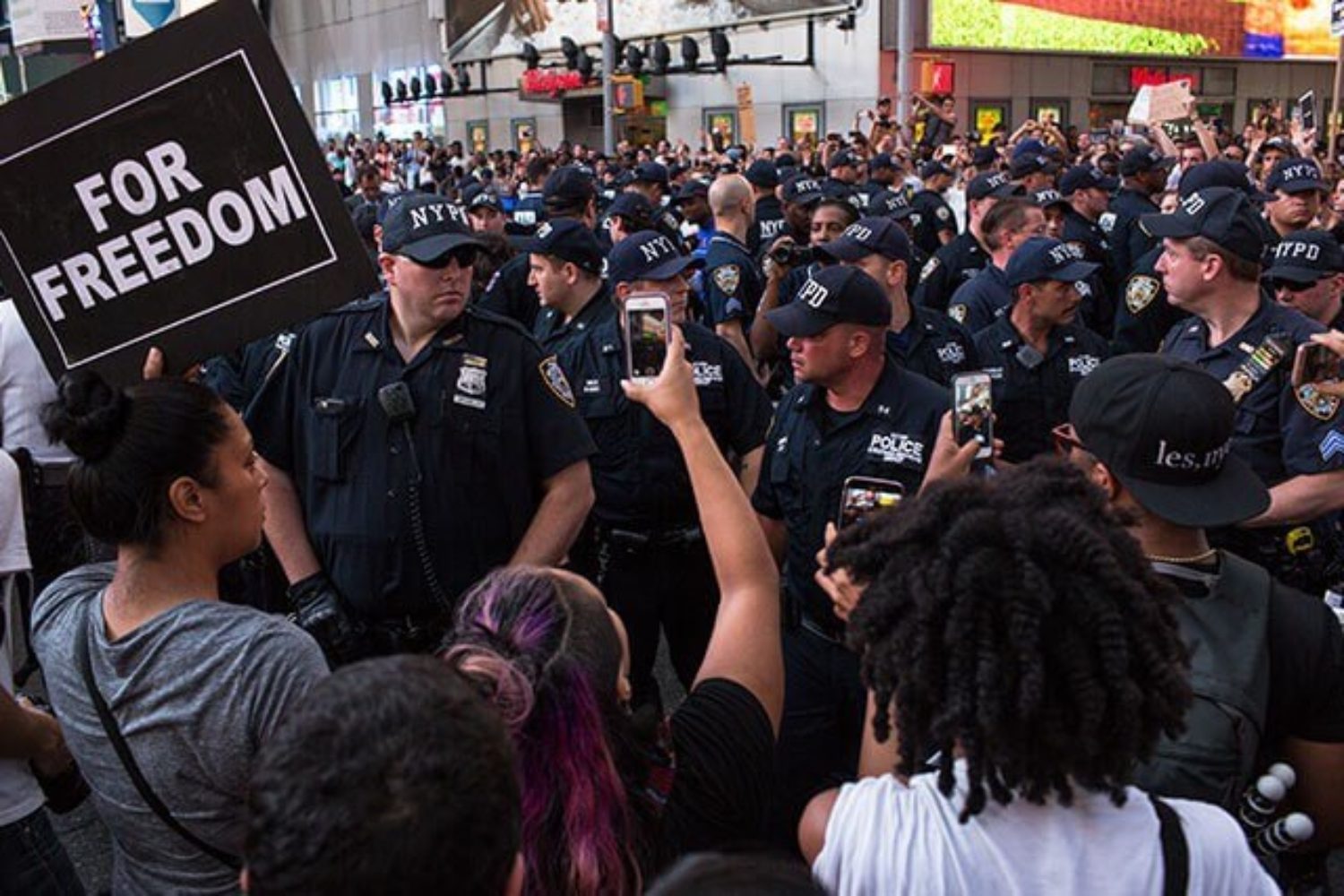 photo above: Demonstrators record a crowd of police officers on hand in New York’s Times Square, where a large crowd protested after fatal police shootings in Louisiana and Minnesota on July 7, 2016. (Christopher Lee / The New York Times)

WN: Police brutality in the U.S. is merely a mirror image of U.S. brutality abroad. It is mimetic scapegoating, according to anthropologist René Girard. Obama, a black privileged American, is part of the problem, not of the solution.

Police departments in the U.S. often arrest and all too often kill citizens on U.S. streets based on “racial profiling.” Young men of certain demographics are targeted based on their “patterns of behavior” for confrontations in which officers’ safety trumps any concern for the safety of suspects, and which easily ramps up to killing.

And so it is abroad. The week’s other chilling news involved the long-promised release of U.S. government data on drone strikes and civilian deaths. The report covered four countries with which the U.S. is not at war. From 2009 through 2015 in Pakistan, Yemen, Somalia and Libya, the U.S. admits to its drone strikes having killed between 64 and 116 civilians, although these numbers are only a small fraction of even the most conservative estimates on such deaths made by credible independent reporters and researchers over the same period.

With U.S. definitions of a “combatant” constantly in flux, many of the 2,372 to 2,581 “combatants” that the government reports killed over the same period will have certainly been civilian casualties. Few eyes in the U.S. watch for cell-phone video from these countries, and so the executing officers’ versions of events are often all that matters.

In June 2011, CIA Director John Brennan stated there hadn’t been “a single collateral death” caused by drone strikes over the previous eighteen months. Ample reportage showed this statistic was a flat lie.

If only Eisenhower had live by this!:
Dwight D. Eisenhower

Every gun that is made, every warship launched, every rocket fired, signifies, in the final sense, a theft from those who hunger and are not fed, those who are cold and are not clothed. The world in arms is not spending money alone. It is spending the sweat of its laborers, the genius of its scientists, the hopes of its children.…This is not a way of life at all, in any true sense. Under the cloud of threatening war, it is humanity hanging from a cross of iron.
Source: presidential address, April 16, 1953