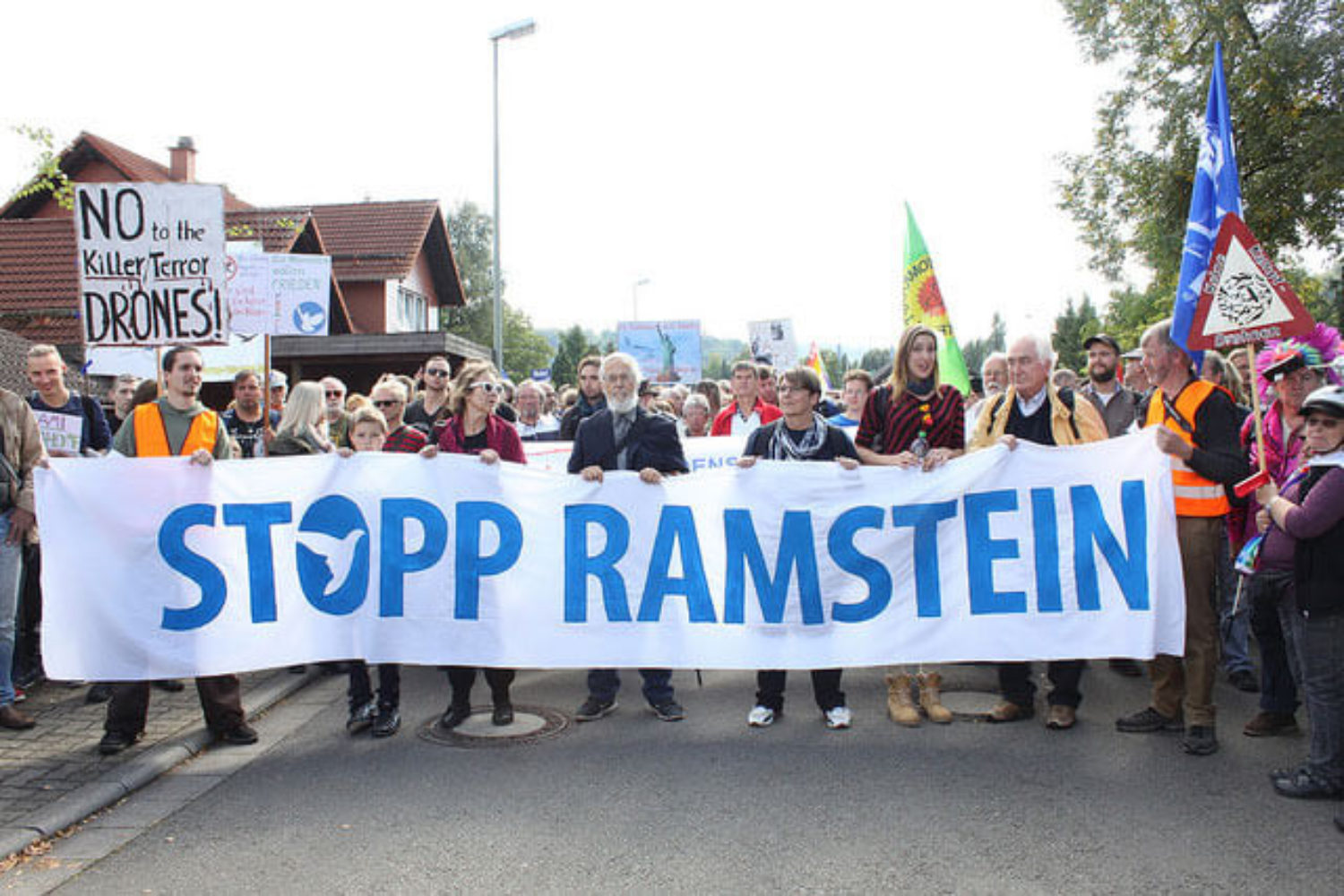 photo above: The US government’s far-flung system for extrajudicial killing uses Ramstein Air Base as a kind of digital switchboard in a process that fogs accountability and often kills bystanders. (Photo: Lucas Wirl / Flickr)

Ramstein receives visual images from drones via satellite, then relays the images to sensor operators and pilots at computer terminals in the United States. “Ramstein is absolutely essential to the US drone program,” says Brandon Bryant, a former Air Force sensor operator who participated in drone attacks on Iraq, Afghanistan, Pakistan, Yemen, and Somalia for five years while stationed in New Mexico and Nevada. “All information and data go through Ramstein. Everything. For the whole world.”

Bryant and other sensor operators had Ramstein on speed dial: “Before we could establish a link from our ground-control station in the United States to the drone, we literally would have to call Ramstein up and say ‘Hey, can you connect us to this satellite feed?’ We would just pick up the phone and press the button and it automatically dials in to Ramstein.” Bryant concluded that the entire system for drone strikes was set up “to take away responsibility, so that no one has responsibility for what happens.”

The US government’s far-flung system for extrajudicial killing uses Ramstein as a kind of digital switchboard in a process that fogs accountability and often kills bystanders. A former Air Force drone technician, Cian Westmoreland, told me that many of the technical people staffing Ramstein’s Air and Space Operations Center are apt to be “none the wiser; they would just know a signal is going through.”

Westmoreland was stationed in Afghanistan at the Kandahar Air Field, where he helped build a signal relay station that connected to Ramstein. He never moved a joystick to maneuver a drone and never pushed a button to help fire a missile. Yet, in 2016, Westmoreland speaks sadly of the commendations he received for helping to kill more than 200 people with drone strikes. “I did my job,” he said, “and now I have to live with that.”

During his work on the drone program, Westmoreland developed “a new kind of understanding of what modern warfare actually is. We’re moving towards more network-centric warfare. So, orders [are] dealt out over a network, and making systems more autonomous, putting less humans in the chain. And a lot of the positions are going to be maintenance, they’re technician jobs, to keep systems up and running.”

Those systems strive to reduce the lag time from target zone to computer screen in Nevada. The delay during satellite transmission (“latency” in tech jargon) can last up to six seconds, depending on weather conditions and other factors, but once the signal gets to Ramstein it reaches Nevada almost instantly via fiber-optic cable. Permission to fire comes from an attack controller who “could be anywhere,” as Bryant put it, “just looking at the same video feeds as us pilots and sensors. He just sits in front of a screen too.” As Andrew Cockburn wrote in his recent book Kill Chain, “there is a recurrent pattern in which people become transfixed by what is on the screen, seeing what they want to see, especially when the screen — with a resolution equal to the legal definition of blindness for drivers — is representing people and events thousands of miles and several continents away.”

For all its ultra-tech importance, the Air and Space Operations Center at Ramstein is just a steely link in a kill chain of command, while a kind of assembly-line Taylorism keeps producing the drone war. “I think that’s part of the strength of the secrecy of the program,” Bryant said. “It’s fragmented.” Meanwhile, “We were supposed to function and never ask questions.”

Worlds away, the carnage is often lethally haphazard. For example, classified documents obtained by The Intercept shed light on a special ops series of airstrikes from January 2012 to February 2013 in northeast Afghanistan, code-named Operation Haymaker. The attacks killed more than 200 people, while only 35 were the intended targets. Such numbers may be disturbing, yet they don’t convey what actually happens in human terms.

Several years ago, Pakistani photographer Noor Behram described the aftermath of a US drone attack: “There are just pieces of flesh lying around after a strike. You can’t find bodies. So the locals pick up the flesh and curse America. They say that America is killing us inside our own country, inside our own homes, and only because we are Muslims.”