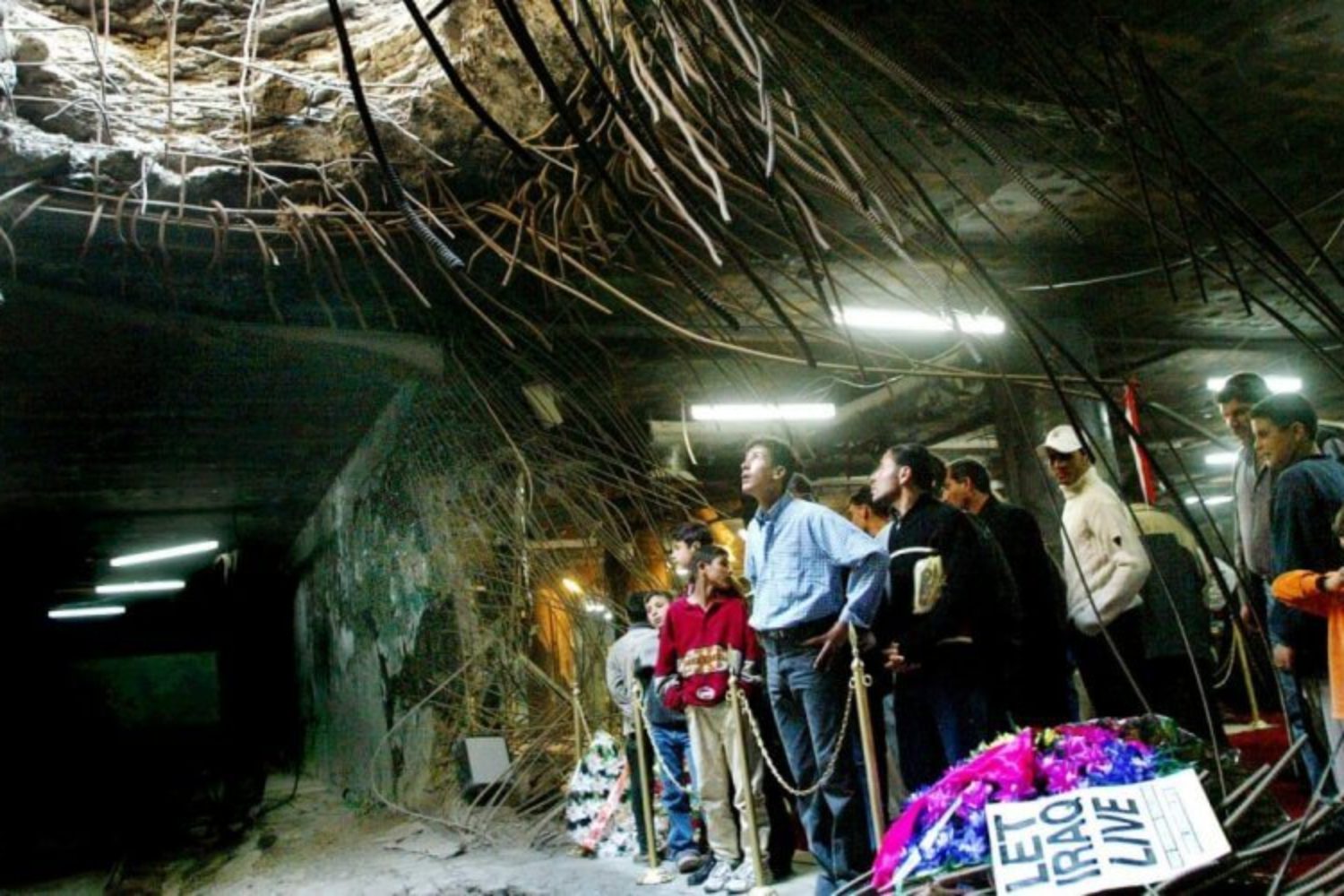 photo above: During a memorial service in Baghdad, Iraqis gather around a bomb hole in the ceiling of the Al-Amariya shelter in 2003, where more than 400 people were killed in a U.S.-led missile attack during the Gulf War. Iraqis opened a new memorial center outside the Al-Amariya shelter to mark the 12 year anniversary of the attack. Photo: David Guttenfelder/AP

When Barack Obama took office, he had two choices.

First, he could tell the truth: That the U.S. has acted with extraordinary brutality in the Middle East, that this had been the main motivation for most Islamist terrorism against us, and if we continued the same foreign policy Americans would be killed indefinitely in intermittent attacks. Then we could have had an open, informed debate about whether we like our foreign policy enough to die for it.

Second, Obama could continue trying to run the Middle East without public input, but in a more rational way than the Bush administration.

Obviously he went with the second choice, which demanded several different forms of political correctness.

Most importantly, Obama pretended that the U.S. has never done anything truly wrong to others, and can enjoy the benefits of power without any costs. This is the most pernicious and common form of political correctness, but is never called that because the most powerful people in America love it.

But Obama also engaged in something more akin to what’s generally called political correctness, by contending that Islam has nothing to do with terrorism. But it does — just not in the way that Frank Gaffney and Pamela Geller would tell you.

Religion and nationalism have always been similar phenomena, and Islam sometimes functions as a form of nationalism. And like all nationalisms, it has a crazy, vicious right wing that’s empowered by outside attacks on members of the nation. The right loves to jeer at Obama for calling Islam “a religion of peace,” and they should — not because Islam specifically isn’t a religion of peace but because there is really no such thing, just as there is no “nationalism of peace.” It’s true religions and nationalism can bring out the best in people, but they also bring out the worst (sometimes in the same person for the same reasons).

But Obama could never say anything like that, because he knew the U.S. needs the governments of Muslim-majority countries like Saudi Arabia and Egypt to keep the rest of the Middle East in line.

This amalgam of political correctness made it impossible for the Obama administration ever to tell a story about terrorism that made any sense. For instance, in his 2009 speech in Cairo, he declared, “It is easier to blame others than to look inward” — and then went on to demonstrate that truism.

His description of wrongs done by the U.S. was vague to the point of meaninglessness: “tension has been fed by colonialism that denied rights and opportunities to many Muslims.” Also, “Iraq was a war of choice that provoked strong differences in my country and around the world.”

Obama then explained that “Violent extremists have exploited these tensions.” So … 19 people were motivated to fly jetliners into buildings by “tensions”? If that’s the only story that non-Muslim Americans hear, they’ll rationally be terrified of Islam.

In 2010, Obama’s counterterrorism advisor, John Brennan, emitted a similar bland puree of words at a press conference when questioned by Helen Thomas about Umar Farouk Abdulmutallab, the failed underwear bomber. Their exchange went like this:

At his sentencing, Abdulmutallab explained his motivation in less time than it took Brennan to say there wasn’t enough time to explain:

To be fair, there is one situation in which American officials have lost the mushmouth and drawn a direct connection between a country killing Mideastern civilians and terrorist retaliation: when that country is Russia. William Burns, formerly Obama’s Deputy Secretary of State, recently and accurately proclaimed that “Russia’s bloody role in Syria makes the terrorist threat far worse.” John Kirby, an Obama State Department spokesman, warned that Russia’s brutalization of Syria would lead to  “attacks against Russian interests, perhaps even Russian cities.”

Russia’s response to our friendly observation was about the same as ours when Russia told us before the invasion of Iraq that it would cause a “wave of terror.”

That brings us back to President Trump and his executive order on immigration.

Trump’s story about why it’s necessary is, factually speaking, garbage. But a normal human being can at least understand it and its moral: These incomprehensible foreigners are all potential psychotics, we’ve got to keep them out. Under these circumstances, who cares that no one from any of these seven countries has killed any Americans yet? They’re all part of a huge morass of ticking time bombs.

By contrast, the Democratic, liberal perspective laid out by Obama makes no sense at all. We’ve never done anything particularly bad in the Middle East, yet … some people over there want to come here and kill us because … they’ve been exploited by violent extremists who’ve perverted Islam and … gotta run, there’s no time to explain.

Regular people could sense that anyone mouthing this kind of gibberish was hiding something, even if they didn’t realize that Obama was trying to keep the U.S. empire running rather than concealing his secret faith in Islam.

And because a coherent narrative always beats the complete absence of a story, no one should be surprised that many Americans find Trump’s fantasy of inexplicable Muslim hatred persuasive. The only way to conclusively beat it will be with a coherent, complicated, true story like this:

Like Loading...
civilizational war over religion is unsolvable, Middle East terrorism is America's doing, wanted by Steve Bannon - who has Trump's ear