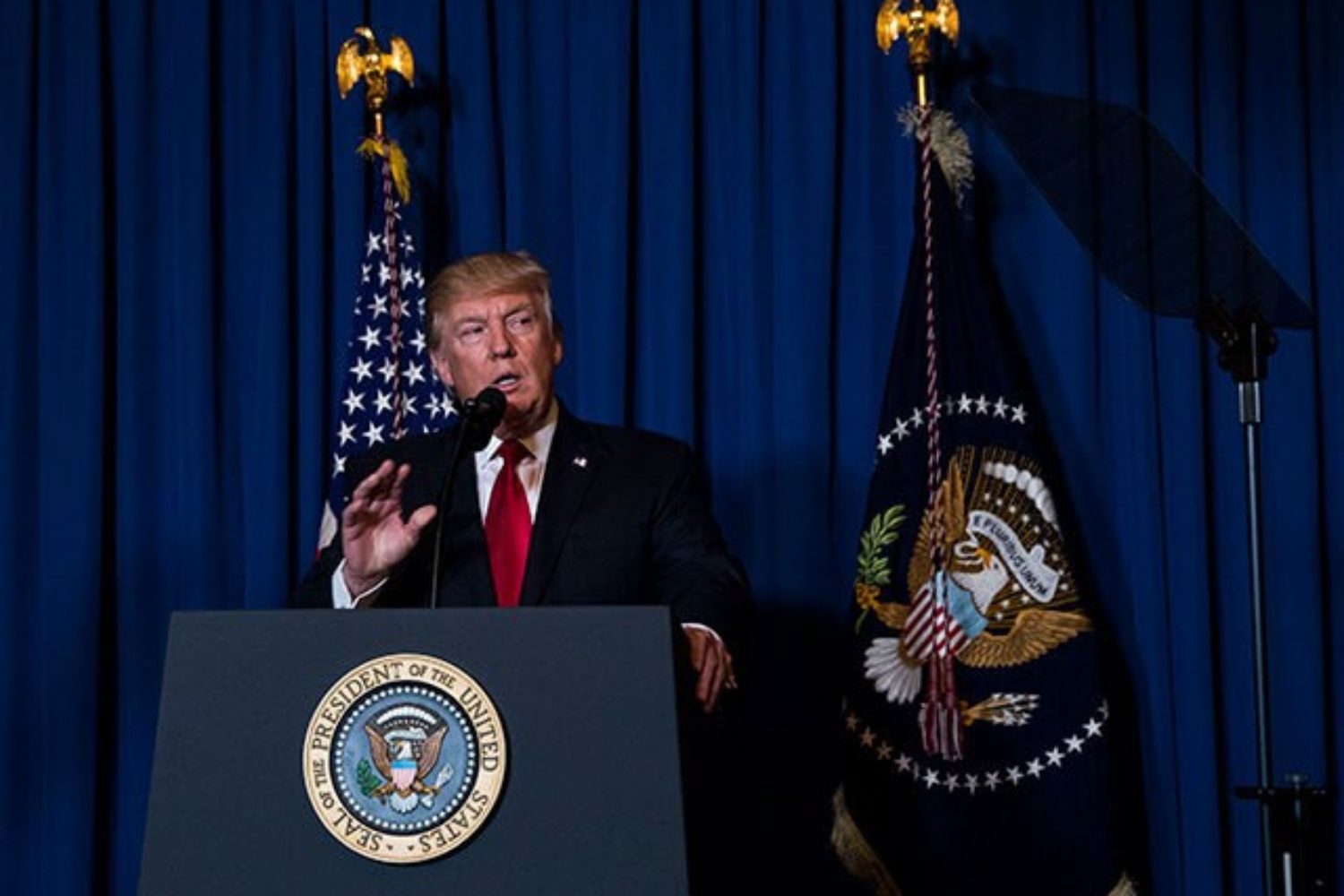 photo above: President Donald Trump makes a statement about the American attack on an air base in Syria, at his Mar-a-Lago resort in Palm Beach, Florida, April 6, 2017. (Photo: Doug Mills / The New York Times)

WN: Trump is a colossal failure: at being a caring, compassionate human being. All his actions point to unchecked monumental self-aggrandizement. This would be sad enough in an ineffectual petty tyrant. It is dangerous and tragic beyond imagining given this petty tyrant has gargantuan killing power at his command – and has used/will use it to wreak untold destruction and misery on millions; on more destructive assaults on God’s Good Creation. “Trump the Deranged Ripper” is a disgrace to humanity; clearly Planet Enemy Number One. (Now, how do we Christians “love” this leading Planet Enemy? OK: this is hard!)

Trump and his Defense Secretary James Mattis have seen the DSB report [Defense Science Board, a blue-ribbon Pentagon panel, that recommended “modernizing” the US nuclear arsenal to develop “a tailored nuclear option for limited use.”] and appear to be flirting with a new doctrine of limited nuclear warfare. Sounding the alarm in a March 3 editorial in The Washington Post, Sen. Dianne Feinstein (D-California), outlined the danger that such a doctrine presents, calling it “terrifying” given “President Trump’s comments in support of a nuclear arms race.”

The alignment between Iran and Russia in Syria is a serious obstacle for an administration that wants to strike Iran. Russia’s enormous nuclear weapons capacity makes it essential to decouple them from Iran. Accordingly, it was widely reported in April that the United Arab Emirates had facilitated a January meeting between Erik Prince, Blackwater founder and brother of Trump Education Secretary Betsy DeVos, and representatives for Vladmir Putin, “in hopes of encouraging Russia to curtail its relationship with Iran, including in Syria.”

Although the details of these meetings are not known, in only a few short days in January and February, Trump took a series of actions aimed at unraveling the rapprochement with Iran that led to a nuclear arms inspection agreement signed by Iran, Britain, France, Russia, China, Germany and the US during the Obama administration in 2015. Highlights include:…

If this sounds alarmist, it is because it needs to be. The Iraq War that was started in order to salvage the failing presidency of George W. Bush has now destabilized half the planet half the planet. It was created with the same kind of bombast and threat inflation that is already coming out of the Trump administration. This is not a lesson that the US and the rest of the world can afford to learn anew.

Sen. Ben Sasse (R-Nebraska) has correctly observed that the Trump presidency has created “a civilization-warping crisis of public trust.” This crisis will continue to deepen even among his core supporters as Trump leaves a trail of abandoned campaign promises and investigations widen into his financial conflicts of interest and Russian connections. Trump’s false allegations of treasonous wiretapping by a former president may also spur an investigation, with legal scholars saying they constitute an impeachable offense.

Impeachment would only be a start in the long and difficult process of rebuilding a republican civic society driven by citizens, not ideologically deranged billionaires. But without it, there may be nothing left to rebuild.