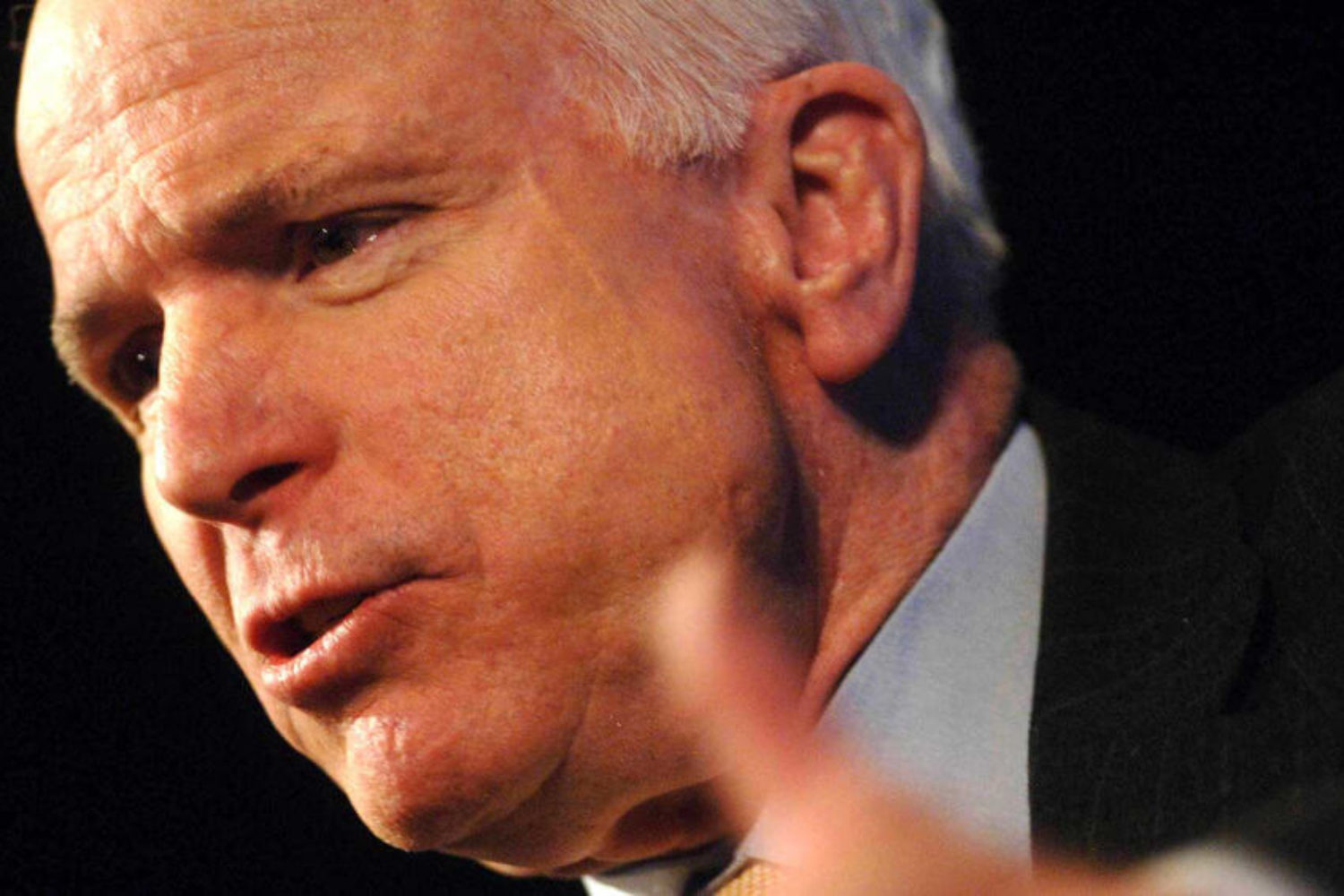 WN: In my view, the article highlighted below is a respectful, balanced assessment of Senator McCain, when seen through the lenses of social justice and peacemaking.

Still another, “A Plague on Both Their Houses“, by Andrew Levine, faults the liberals for giving McCain in his death much more than a pass, tripping over each other to outdo the Republicans in laudatory remarks and gestures. He writes:

The sad fact is, though, that apart from his decision to abide by McCain family values, there is nothing that makes his case stand out from many others, and certainly nothing that countervails the stubborn fact that McCain was on the wrong side in Vietnam, and remained proud of it to his dying day.

As a Senator, he was on the wrong side of many other conflicts too – in Iraq and Syria and throughout the Greater Middle East, in the former Yugoslavia, in Libya, and in sub-Saharan Africa. And he was always on the ready for a war against Iran and North Korea. Remember the hot mike that picked up his singing: “bomb, bomb, bomb, bomb bomb Iran” to the tune of the Beachboy’s “Barbara Ann.”

McCain was good on campaign finance reform, but not much else. Like his sidekick Lindsay Graham, and his buddy hapless Joe Lieberman, he was basically a dunce of a Senator, eager to support legislation pleasing to his party’s grandees, and indifferent to the interests of everyone else.

McCain’s liberal eulogists cannot help but concede that, by choosing Sarah Palin for a running mate in 2008, McCain accorded legitimacy to her know-nothing political style and therefore, in time, to the Tea Party and ultimately to the most retrograde sectors of the benighted Trump base.

And so, the argument goes, he should be forgiven even for turning over the rock from beneath which, in due course, Trump slithered out.

For that Chuck Schumer wants to name the Senate Office Building after him. Better him than the segregationist Georgia Senator Richard Russell, but even so. Are liberals so morally and intellectually depleted that they cannot do better than venerate a war-mongering reactionary with bad judgment, a “maverick” streak, and an occasional inclination to go “bipartisan”? So it seems.

I remember listening to the newly elected President Jimmy Carter on his Election Day refer to the United States as “the greatest nation on earth“: this from an Evangelical Christian Sunday School teacher (still teaching at 94 years of age!, who shuns riches and lives modestly in Plains Georgia). What is abundantly clear from his entire life of service however is: he will not be teaching about the Gospel as Counter-Narrative to Empire. “The greatest nation on earth” is greatest in one respect only: as a brutally marauding Empire, perhaps the most brutal of all times by measure of sheer numbers mercilessly subjugated — all to maximize wealth acquisition for said American Empire.

Seen in the light of the Gospel as Counter-Narrative to Empire and the Peaceable Kingdom, John McCain throughout his career, as with Jimmy Carter (and a long line of previous Presidents — one can include also vast numbers of public servants to Empire), falls tragically, utterly short. Great numbers throughout this Empire’s history cry out from the grave for justice, along with those in the Book of Revelation (6:10), exclaiming:

“How long, Sovereign Lord, holy and true, until you judge [all Empires] and avenge our blood?”

Truth be told, John McCain lived a very complicated life. I have already addressed his enthusiasm for war and the mythologies he and others have eagerly crafted to justify US imperialism over the last half-century—including the Republican and Democratic presidents he ran against in 2000 and 2008, who we now know are his handpicked eulogists. But I can’t get out of my head the fact that John McCain is also the person who gave us Sarah Palin, founding “hockey mom” of the Tea Party, a decision he and his campaign handlers have since claimed to regret. This is no minor matter. McCain’s choice of Palin as his running mate was a hasty, cynical, and desperate media move, designed to alter the political dynamics of a presidential race that was slipping away from him at the time. It also unleashed the fresh hell of white grievance and xenophobic racism that brought us Donald Trump. In the last two years, McCain has been widely celebrated as a “true patriot,” always the “maverick,” a striking (and admittedly rare) Republican antidote to Trump and Trumpism. But less than a decade ago, he was fully complicit—there is no way to sugarcoat or euphemize this—in Palin and Palinism, which is the immediate antecedent to the current national nightmare in which we all find ourselves. I can’t imagine that Trump, standing idly by watching Fox News back in the day, wasn’t emboldened by the obvious and odious prospect of Palin’s popularity. In real ways, like an arsonist who is also a firefighter, McCain helped to create the political crisis in which he himself emerged as a latter-day “hero.” This is a performance worthy of Shakespeare—tragedy, not comedy. And let us not forget that John McCain, newly elected to Congress in 1983, voted against legislation to make Martin Luther King Jr. Day a national holiday, an act of cowardice he would later regret, along with his failure to condemn the Confederate flag during the South Carolina primary in 2000. His capitulation to racists—the worst devils of our nation—goes back decades.

I have been struck in recent days by how many people, from across the political spectrum, have shared or referred to the now-famous video from a McCain campaign town hall in 2008. In it, the candidate grabs the microphone from an old white woman who said that she couldn’t “trust” Barack Obama, then his political opponent, because “he’s an Arab.” (In retrospect, we can view this as early evidence of the fertile Palin-planted soil in which Trump’s birtherism bloomed.) McCain’s response, now well known, was to say that Obama was a “decent family man” and a “citizen.” As someone who regularly speaks in public, often in very contentious contexts, I am willing to give McCain some benefit of the doubt with respect to intention: He was clearly bothered by this sad old white woman’s racist assertion. But I won’t give him a pass. Sometimes spontaneity reveals more troubling truths about our humanity. Indeed, the irony of that moment is that he had to reject the very prejudices that his running mate—and he, by extension—had been ginning up from at least as far back as the moment she was chosen. And regardless of McCain’s intent, the impact of his response—to simply deny that Obama is “Arab” rather than fully denouncing the woman’s prejudices against Arabs—was something altogether different. For Arab and Muslim folks who have been increasingly under siege since 9/11—due in large part to two wars in the Middle East that McCain enthusiastically supported (and Obama continued)—this comment was yet another moment of marginalization, an expression of a pernicious kind of respectability politics that masks deeper prejudices. I find it more than interesting that that moment is being read, in this moment, as a sign of John McCain’s personal integrity rather than his political inadequacy.

Like Loading...
American Empire, Reckoning With John McCain, Respecting the best of McCain requires grappling with the rest of McCain., Timothy Patrick McCarthy, victims as in Book of Revelation cry out for justice