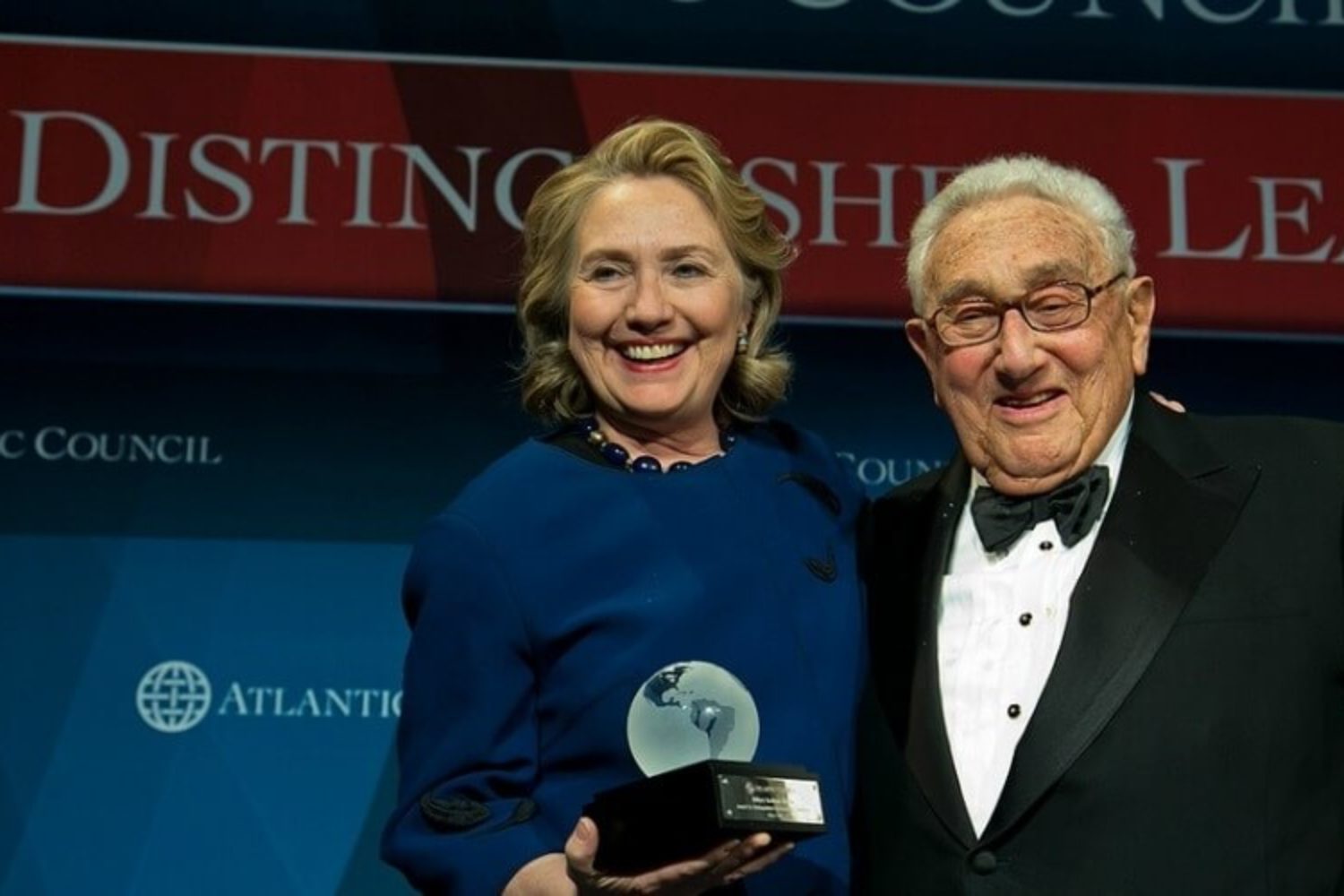 When it comes to applying rules of international law and ethics, the U.S. government and its mainstream media operate with stunning hypocrisy, what might be called “moral idiocy”

Hillary Rodham Clinton was awarded, May 1, 2013, the Atlantic Council‘s Distinguished International Leadership Award. In her speech, she primarily discussed United States Foreign Policy. Clinton was introduced by former Secretary of State Henry Kissinger where he famously stated his support for a Clinton run for president in 2016.

WN: There can be no doubt, in light of the article linked below, that Hillary fully qualifies as a moral idiot. (So does Kissinger, as the article linked below indicates.) Sadly, so do most world leaders, at least of “strong states”, including the entire run of presidents in charge of the United States Empire. (It goes without saying that this applies to many others: terrorists, murderers, etc.) So, even more sadly, do large swaths of electorates, who routinely vote moral idiot leaders into power. Such  exponentially outnumber the commission of  mass murders compared to any lone wolf mass murderer who all too often captures the headlines. It is a crazy, morally idiotic, world.

In light of this article, one could somewhat change Jesus’ words, All those who take up the sword shall perish by the sword, to All those who authorize the sword are invariably moral idiots.

The International Red Cross, which oversees observance of the [Geneva] accords, has not been able to do much more than shine lights on the breaches of the law and pick up the bloody pieces in the aftermath. At the rate our nation-states slaughter the innocent, it is a wonder there is an overpopulation problem.

Honored Only In the Breach

There are likely two main reasons why the Geneva Accords have had so little influence on behavior: hypocrisy and ignorance.

As to hypocrisy, it is the case that, except in rare instances, there are no serious consequences for violating the law. Particularly, if you are agents of a strong state, or the ally (like Israel) of a strong state, the chances of state leaders or agents being arrested for war crimes or crimes against humanity is exceedingly low.

One wonders why nations bothered writing and enacting the Geneva Accords in the first place. The reason might have been specific to the moment. Faced with the atrocious behavior of leaders and soldiers (it is most often the behavior of the defeated party that is pointed to, so think here of the Holocaust), and the immediate outcry this behavior produced, the pressure for some sort of reaction carried the world’s leaders forward to make and ratify agreements to prevent future repetitions of such crimes.

Yet, as it turns out, these were not serious efforts except when applied to the defeated and the weak. For the strong, it is one thing to enact an international law, it is another thing altogether to apply it to oneself or other strong states.

As to ignorance, to date it is obvious that the politicians and soldiers who wage war, or who are responsible for the arming and training of allies who do so, do not regard seriously, and in some cases are not even familiar with, the Geneva Accords. In my experience, they often cannot, or will not, discuss them when asked, and regard statements referencing the disobeying of illegal orders in the Uniform Code of Military Justice, to be rightfully honored only in the breach.

And that is the important point. We can safely say that when it comes to waging war, or for that matter, aiding and abetting others doing so, the accepted behavior of both soldiers, statesmen, and diplomats is that called moral idiocy.

Moral Idiocy is not something this writer, creative as he is, has simply made up. It is a real concept in psychology that has been around for over a century. However, in our increasingly relativistic societies, it has fallen into disuse.

Briefly, it means the “Inability to understand moral principles and values and to act in accordance with them, apparently without impairment of the reasoning and intellectual faculties.” The key word here is “understand.” It is not that moral idiots do not know, intellectually, that something called morality exists, but rather they cannot understand its applicability to their lives, particularly their professional lives.

There are innumerable examples of such apparent moral idiots acting within the halls of power. The following short list specific to the U.S. reflects the opinion of this writer: George W. Bush, Dick Cheney, Donald Rumsfeld, John Bolton, Oliver North, Richard Nixon and, my favorite, Henry Kissinger. Those reading this both in and outside of the United States can, no doubt, make a list of their own.

A particular incident related to Henry Kissinger’s behavior gives us an excellent example of this moral failing. The story is told by Stephen Talbot, a journalist and documentary producer, who in the early 2000s interviewed Robert McNamara, who had been U.S. Secretary of Defense for much of the Vietnam War years and was, by the 1990s, full of remorse and feelings of guilt for his behavior while in office.

Then, shortly thereafter, Talbot interviewed Kissinger, who had been Richard Nixon’s Secretary of State and National Security Advisor during the Vietnam War’s final years. Here is how Talbot describes what, for us, is the relevant part of his interview with Kissinger:

“I told him I had just interviewed Robert McNamara in Washington. That got his attention. . . . and then he did an extraordinary thing. He began to cry. But no, not real tears. Before my eyes, Henry Kissinger was acting. ‘Boohoo, boohoo,’ Kissinger said, pretending to cry and rub his eyes. ‘He’s [McNamara] still beating his breast, right? Still feeling guilty.’ He spoke in a mocking, singsong voice and patted his heart for emphasis.”

Kissinger obviously held McNamara and his feelings of guilt in utter disdain. He had actually committed greater crimes than McNamara – crimes documented in Christopher Hitchens’s 2001 book, The Trial of Henry Kissinger – and yet apparently felt no remorse at all. How does one get like that?