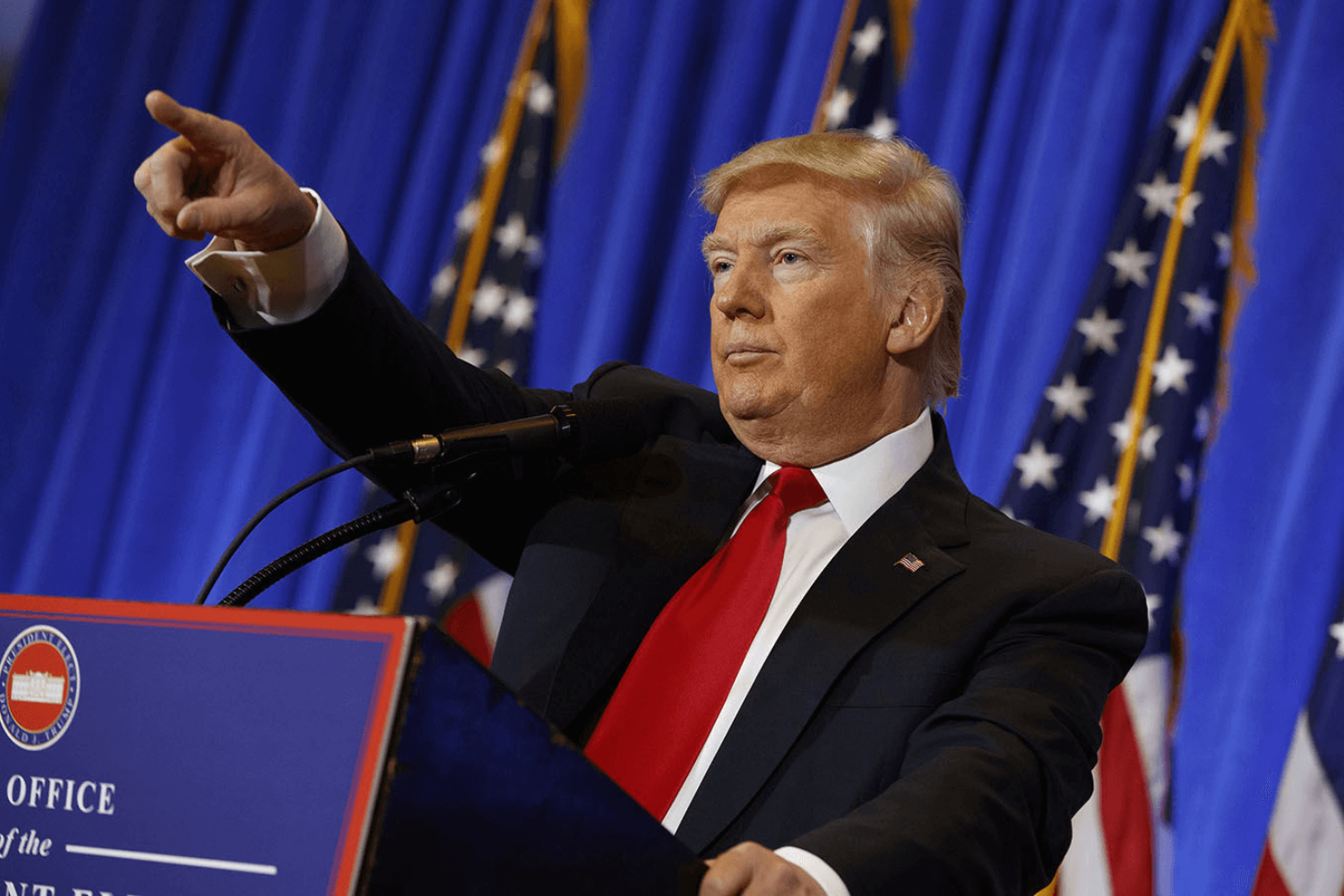 He has no mandate. That fact has so unhinged Trump that he is shaming himself and his office by promulgating obvious lies.

Picture above: President-elect Trump calls on a reporter during a news conference in the lobby of Trump Tower, on Wednesday, January 11, 2017. (AP Photo / Evan Vucci)

WN: I have a friend who has liked to quote Nazi propagandist par excellence, Joseph Goebbels, who famously wrote: “If you tell a lie big enough and keep repeating it, people will eventually come to believe it.” My friend stopped there, but Goebbels continued:  “The lie can be maintained only for such time as the State can shield the people from the political, economic and/or military consequences of the lie. It thus becomes vitally important for the State to use all of its powers to repress dissent, for the truth is the mortal enemy of the lie, and thus by extension, the truth is the greatest enemy of the State.” For my friend, Barack Obama and Hilary Clinton were abject liars of Goebbels proportions.

While I have little doubt of that being to an extent true about Obama and Clinton, my friend has fallen strangely silent about “his man” who occupies the White House as of January 20, 2017. Though every fact checker on Trump’s claims throughout the recent American Elections discovered he fairly bristles with “pants-on-fire” (Politifact) prevarications, and continues…

The article below indicates that this will likely be Trump’s modus operandi throughout his Presidency.

There is a view of political realism that A.J. Coates describes in The Ethics of War, that states: “The moral prohibition of lying, for example makes… no sense at all in affairs of state.  Telling the truth is a moral luxury that politicians and diplomats can rarely afford (p. 53).” Coates continues by stating that this kind of political realism obligates them in their political duty to conceal, suppress, and twist the truth. They in fact answer to a different moral code whereby lying, if done for a foreseeable “good” end, frees such from any concern about intrinsic truthfulness in what they say. A classic instance is the state going to war, where the first casualty is truth. It is the supreme political version of the end justifying the means.

Trump clearly has seized upon this “morality” as a key signature of his kind of politics: apparently of his entire life – trademark of narcissistic megalomaniacs. The article below speaks to that.

So when Trump pushes the “millions of people who voted illegally” line now—not as the president-elect but as the occupant of the Oval Office—he is using the bully pulpit of the presidency to deliberately deceive the American people. And when he proposes an investigation of a “problem” that does not exist, he engages in an Orwellian abuse of the power of that office to spread a big lie.The truth is this: Fifty-four percent of Americans voted for someone other than Donald Trump for president. Hillary Clinton won 65,844,610 votes for president, while Donald Trump received just 62,979,636 votes. That’s a 2,864,974 popular-vote victory for Clinton. Donald Trump is the president. But he has no mandate. That fact has so unhinged Trump that he is now shaming himself and his office by promulgating obvious lies.