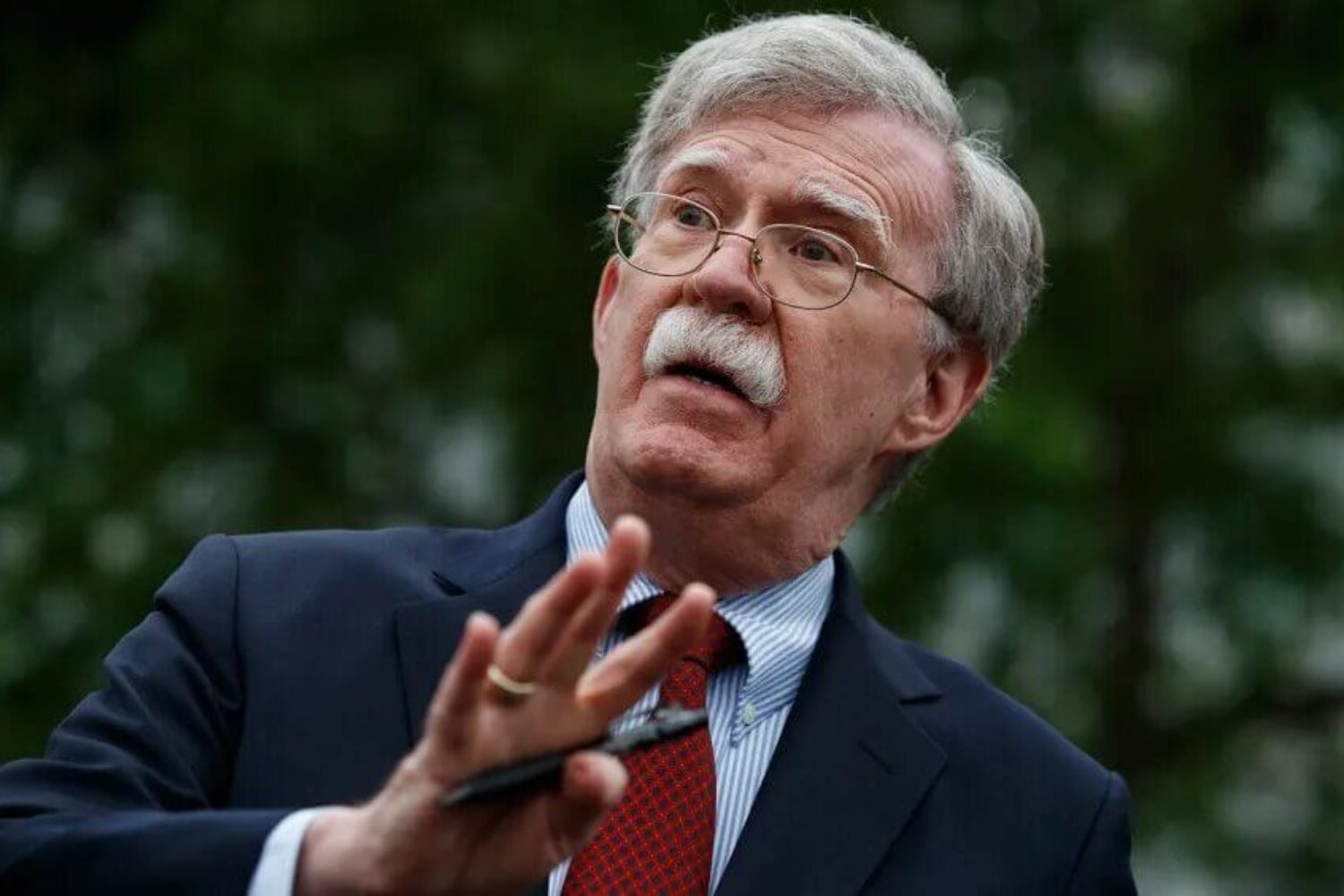 But only a little. Trump’s clownish foreign policy shouldn’t be used to discredit diplomacy.

photo above: John Bolton talks to reporters about outside the White House on May 1, 2019. (AP Photo / Evan Vucci)

WN: This analysis strikes as reading Trump all too well: thereby accentuating Trump’s continued gargantuan threat to the world.

John Bolton doesn’t seem like a man who quotes T.S. Eliot in moments of trial, but he might take comfort in these words from Four Quartets: “In my beginning is my end.” Bolton’s truncated tenure as national security adviser, a 17-month sprint from April of 2018 to this week, started with Donald Trump delighting in Bolton’s vigorous defense of the president on Fox News and ended, reportedly, with the POTUS fuming over Bolton’s refusal to be a talking-head surrogate. According to The Washington Post, “Bolton recently said he did not want to appear on television to defend some of the administration’s positions, particularly on Afghanistan and Russia.”

Television, then, was both the making and unmaking of John Bolton. Like so much else in the Trump era, Bolton’s career as national security adviser was a media creation. Fittingly, it ended in a flurry of competing tweets, with Trump claiming Bolton was fired while Bolton countered he’d tried to quit first.

Whatever the exact sequence, Bolton’s departure is welcome news for one simple reason: Bolton was an ultra-hawk who pushed some incredibly dangerous policies. Bolton advocated withdrawal from the Iran nuclear deal, coupled with badgering the Iranian regime; canceling long-term nuclear agreements with Russia; making impossible demands on North Korea—among other reckless initiatives. Bolton was known to stand in the way of Trump’s occasional gestures of diplomacy aimed at Iran, North Korea, and the Taliban. With Bolton gone, some optimistic souls are even hoping that Trump might enter a new phase of his presidency, one in which his unilateralist instincts will be turned toward negotiation rather than bluster.

These liberal pundits are being too generous to the president. It’s true that to date Trump, unlike George W. Bush, has avoided an all-out war. But Trump also likes to make statements and gestures that skirt close to war. He threatened to bring down “fire and fury” on North Korea before he declared he was “in love” with Kim Jong-Un. Trump has also ramped up drone strikes, with a chilling disregard for civilian lives that outdoes his immediate predecessor. And let’s remember: The same Trump who fired Bolton first hired him.

Trump is not a dove, nor is he a hawk. Trump is not a bird of any feather. He’s a narcissist. The key to understanding the wild gyrations of Trump’s foreign policy is his self-image as a great global dealmaker. President Obama won a Nobel Prize just for not being George W. Bush, and Trump would like nothing more than to best his predecessor. Much of Trump’s wayward foreign policy makes sense when we realize that his normal tactic is to create a crisis—then take credit for trying to fix it. That’s the pattern he’s followed with North Korea and NAFTA. It also seems to be his goal with Iran. Trump hungers for a photo-op that will prove once and for all that he’s the greatest dealmaker of the age.

Nothing in Trump’s record suggests he has the command of government policy—or skill at bureaucratic in-fighting—needed to make any sort of lasting deal in the face of opposition from his own party or the military-industrial complex. Bolton is gone, but Mike Pence and Mike Pompeo are still in power. They remain in Trump’s good books by diligent sycophancy. A former ambassador once described Pompeo as “a heat-seeking missile for Trump’s ass.” But Pence and Pompeo are also rigidly right-wing Republicans and can be trusted to undermine any diplomatic gambit.

The true danger of Trump is not that he’ll make bad deals but that his clowning will discredit diplomacy. Post-Trump, the United States will have to go into diplomatic overdrive: Sign back on to the Paris Accord and the Iran nuclear deal, come to terms with nuclear North Korea, make peace with the Taliban, normalize relations with Cuba, deescalate from a looming conflict with China, reengage with Russia on nuclear diplomacy, among many other urgent tasks. Even Denmark will need an apology for Trump’s buffoonish attempt to buy Greenland. All of this will be harder to do because Trump has convinced the world that the United States is a mercurial and untrustworthy superpower. With Bolton gone, the danger is not bad deals—but that the next president won’t be up to the daunting task of rebuilding American diplomacy.