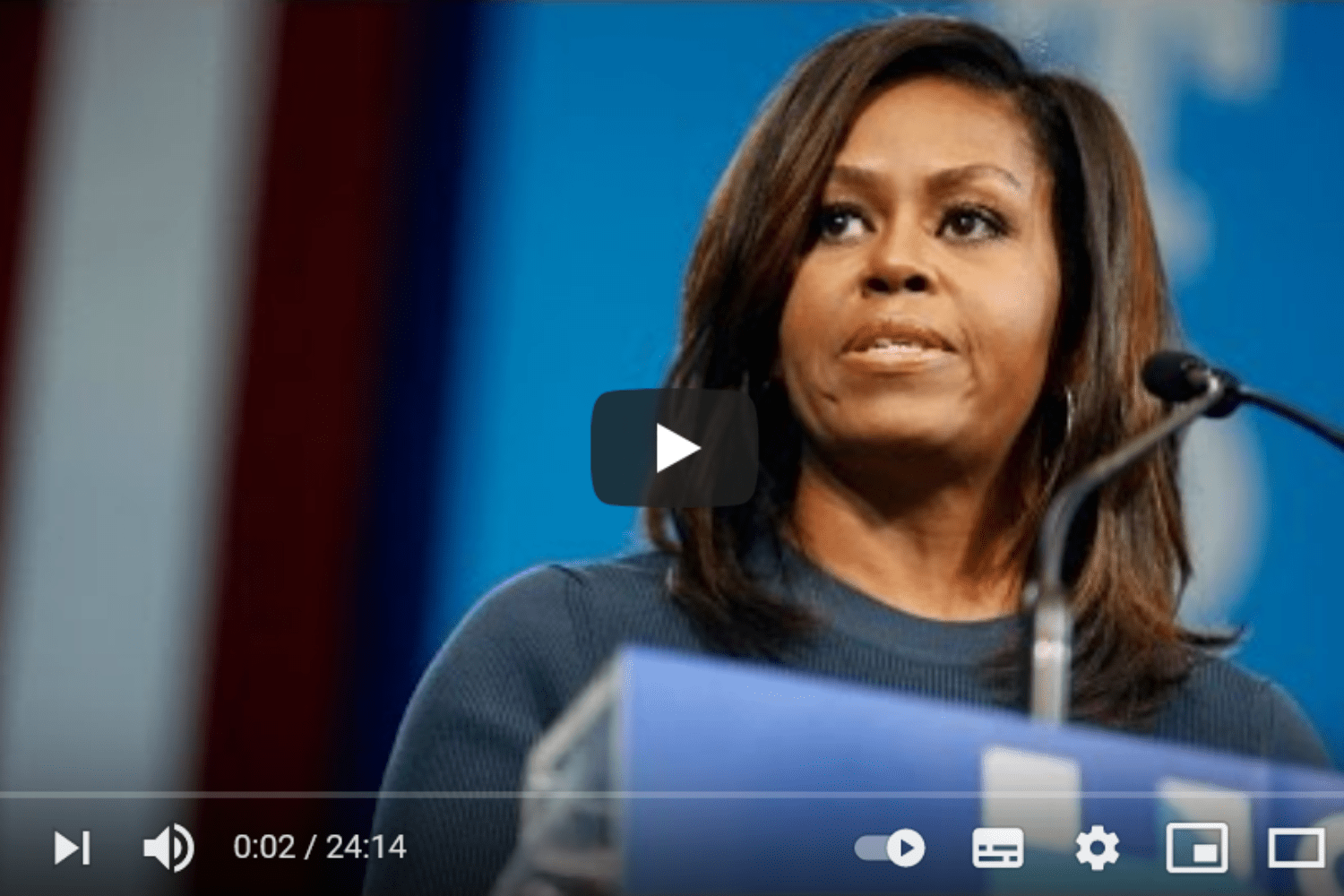 WN: A friend reminded me, in response to that below, that none of us in the first world is untainted vis à vis violence. And with that taintedness is a bending at least towards hypocrisy and Pharisaism – which my friend also reminded me about.

So with that mea culpa, please read on.:

Your speech October 13, 2016 in New Hampshire was powerful, direct, succinct, unequivocal–and so much more. Was it also the pot calling the kettle black?

There is no question about your passion and truth-telling! Trump by contrast is surely an inveterate liar, a rabid misogynist, and perhaps the most blatant megalomaniac ever to run for the US Presidency.

Can it be agreed though that he came by his abusive demeanour towards women “honestly”? That he exhibits ubiquitous delusional male privilege and bullying deportment since (so goes that narrative) men are central, superior and deserving? That Trump is utterly blind to this, not knowing better, though should?

And you, Ms Obama? Are you his mirror image, having come by honestly your pervasive unknowing blindness too?

The system used the main nonviolent themes of Martin Luther King’s life to present a strategy designed to protect its own interests – imagine the most violent nation on earth, the heir of Indian and African genocide, the only nation ever to drop an atomic bomb on a civilian population, the world’s biggest arms dealer, the country that napalmed over 10 million people in Vietnam (to “save” it from communism), the world’s biggest jailer, waving the corpse of King, calling for nonviolence! — Mumia Abu Jamal

Do you not see:

“Turns out I’m really good at killing people,”[Obama] quipped, “Didn’t know that was gonna be a strong suit of mine.”—

The War on Terror Is Still Alive and Well, by Robert L. Borosage, September 8, 2021 (How does America breed such monstrous leadership? Or is it indeed culturally, ubiquitously, endemic?1

“There is something wrong with the economic system in this country… Something is wrong with capitalism.”

“The problems we are dealing with are not going to be solved until there is a radical redistribution of economic and political power.”

“The evils of capitalism are as real as the evils of militarism and racism.”

“All I have been doing in trying to correct this system in America has been in vain. The whole [system] will have to be done away with.”

“I knew I could never again raise my voice against the violence of the oppressed in the ghettos without having first spoken clearly to the greatest purveyor of violence in the world today, my own government.”

“The United States of America is the greatest purveyor of violence in the world today.”

“God didn’t call on America to engage in a senseless, unjust war in Vietnam. And we are criminals in that War. We’ve committed more war crimes almost than any other nation in the world, and I’m going to continue to say it. And we won’t stop it because of our pride and arrogance as a nation.”

“A nation that continues year after year to spend more money on military defense than on programs of social uplift is approaching spiritual death.”

“To pursue endless war is to worship the god of hate and bow before the altar of retaliation.”

“How can they [America’s enemies] trust us when we… charge them with violence while we pour every new weapon of death into their land? Surely we must understand their feelings even if we do not condone their actions.”

“We are called to speak for the weak, for the voiceless, for victims of our nation and for those it calls enemy…”

“[Black Americans] ought to come to Washington, sit down if necessary in the middle of the street and say ‘We are here, we are poor, we don’t have any money. You have made us this way, you keep us down and we’ve come to stay until you do something about it.’”

“Many people would like to have a nation which is a democracy for white Americans but simultaneously a dictatorship over Black Americans.”

“Even though we’ve gained legislative and judicial victories, they did very little to improve the lot of millions of Negroes in the teeming ghettoes of the North. Changes were at best surface change.” (Source)

And little Parker we read about in this story could hopefully eventually be far more taken and inspired by these portraits (one of which is featured) — and the man behind them — than the hollow glamour of the wife of a hollow man filled indeed with ruling-class ideas — to the absolute disregard and far worse of the masses worldwide suffering under and immolated on the altar of American Empire hegemony.

For another juxtaposition — between Dr. King and Billy Graham — please see here and here.

A citation from the latter:

As the article highlighted in the earlier post indicates, Graham’s message seemed powerfully at odds with that of Dr. Martin Luther King Jr. The one enjoyed the favour of Presidents and went peacefully to the grave, the latter was murdered for his message, likely at the hands of the U.S. government.

And now Ms. Obama you are touting a “well-scrubbed” saccharine memoir according to this article. Born with a silver spoon in your mouth? Hitched to an Uncle Tom for sure who as this article shows, is a hollow man with visions of grandeur. Mary’s Song (which seems never to have been Michelle’s Song) each Christmas –ideally always–reminds us:

… he has brought down the mighty from their thrones and exalted those of humble estate… (Luke 1:52)

Do you fail to see: