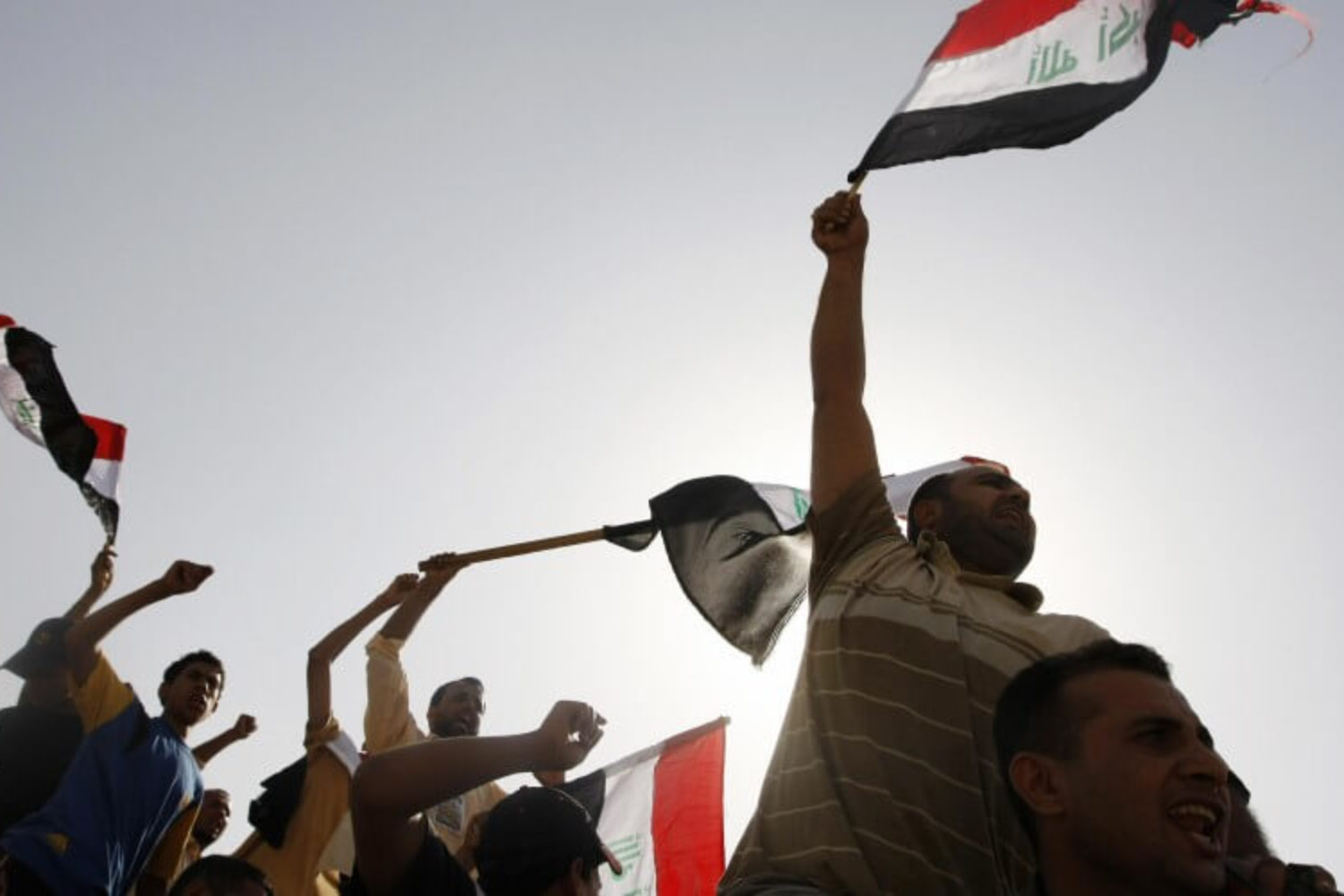 It should be no surprise that the new governments installed by all these U.S. wars and coups are among the most corrupt regimes on earth.

by Medea Benjamin and by Nicolas J S Davies

photo above: Not only are they reeling from protests against government corruption and austerity programs, like Ecuador and Algeria, but in both Haiti and Iraq, their corrupt neoliberal governments were imposed on them by the use of U.S. military force. (Photo: Iraqi Protesters/ AHMAD AL-RUBAYE/AFP/Getty Images)

WN: “Militarized capitalism” is the preferred term of  Bully Nation: How the American Establishment Creates a Bullying Society by Charles Derber and Yale Magrass. I discuss their book in “Worried About Those Global Cyber Attacks? They Were Started by Washington.”

The article highlighted below is succinct and tragically accurate.

This season could be called the Autumn of Discontent, as people from the Middle East to Latin America and the Caribbean have been rising up against corrupt neoliberal governments. Two of the countries in crisis, Haiti and Iraq, are on opposite ends of the earth but have something important in common. Not only are they reeling from protests against government corruption and austerity programs, like Ecuador and Algeria, but in both Haiti and Iraq, their corrupt neoliberal governments were imposed on them by the use of U.S. military force.

In 2003 and 2004 respectively, U.S. forces illegally invaded Iraq and Haiti, removed their internationally recognized governments from power and replaced them with U.S.-backed regimes. Both countries have since been governed in line with the dominant neoliberal ideology that the U.S. and its allies have imposed on most of the world since the 1980s. The protests and savage repression in Iraq and Haiti today are only the latest evidence of the utter failure of neoliberalism and the extraordinary human cost of U.S. efforts to impose it by military force on countries that resist.

In the first week of October, more than 100 people were killed and 6,000 wounded in Baghdad, Nasiriyah and other Iraqi cities, as the Iraqi Army and police fired into large demonstrations. Young Iraqis have risen up against government corruption, unemployment and poverty that leaves them with dismal prospects, even as record oil production fills the pockets of the ruling elite in Baghdad’s Green Zone.

Meanwhile, at least 17 people have been killed in the Haitian government’s repression of protests calling for the resignation of U.S.-backed President Juvenal Moise. Public anger has boiled over into the streets as Moise faces credible charges of embezzlement and corruption. His government has utterly failed to improve the lives of most Haitians. Haiti remains the poorest country in the Western hemisphere, with a per capita GDP of only $870 per year and 60% of the population living below a poverty line of $2.41 per day.

In a Foreign Affairs article in January 2019, Senator Elizabeth Warren explained how the U.S. “began to export a particular brand of capitalism, one that involved weak regulations, low taxes on the wealthy, and policies favoring multinational corporations. And the United States took on a series of seemingly endless wars, engaging in conflicts with mistaken or uncertain objectives and no obvious path to completion. The impact of these policy changes has been devastating.”

What Senator Warren skated over, without connecting the dots, was that the real objective of those wars, coups and other regime change operations was precisely to impose the “particular brand of capitalism” she described, and, if necessary, to do so by the illegal and deadly use of military force.[ref =”1″]“The hidden hand of the market,” [Thomas] Friedman notes in a particularly telling fragment, “will never work without a hidden fist. McDonald’s cannot flourish without McDonnell Douglass, the designer of the F-15. And the hidden fist that keeps the world safe for Silicon Valley’s technologies to flourish is called the U.S. Army, Air Force, Navy, and Marine Corps (The Lexus and the Olive Tree).”))

U.S. officials of both major parties, from neoconservatives like Paul Wolfowitz to “humanitarian interventionists” like Madeleine Albright, peddled the simplistic notion that the U.S. war machine could be repurposed to impose neoliberalism by force on dissident countries around the world. Twenty years on, the results of those policies have been universally catastrophic.

Even in the U.S., at the very heart of the neoliberal empire, a new generation raised on the myths of neoliberalism now rejects its absurdities: trickle down economics; the magic of the market; union-busting; privatized healthcare and education; the best Congress money can buy; the shrinking middle class; the rampant destruction of the natural world; and so on.  As British economist J.M. Keynes reportedly said in the 1930s, “Laissez-faire capitalism is the absurd idea that the worst people, for the worst reasons, will do what is best for all of us.”

But as corrosive as neoliberalism has been to working people in the U.S., it has been far more destructive wherever the U.S. and its allies have tried to impose it by military force.

Neoliberalism is an inherently corrupt system. It creates a vicious circle in which ruling classes can leverage their wealth to gain dominant political power and then use that power to cut taxes and rewrite laws to further enrich themselves. This is a powerful engine to generate ever more concentrated wealth and political power for the 1%, with impoverishment and political marginalization for everybody else.

Neoliberalism reduces politics mainly to a choice between politicians and parties who represent factions of the same corrupt ruling class, which retains a monopoly on power whichever party wins. But the fatal flaw in the neoliberal view of the world is the presumption that ruling classes can safely ignore the 99% of the population they disenfranchise, exploit or even kill.

This idea that only the elites in each country matter has led directly to the U.S. policy of “regime change,” in which leaders who resist neoliberalism are overthrown by whatever means necessary.  It should be no surprise that the new governments installed by all these U.S. wars and coups are among the most corrupt regimes on earth.

But as U.S.-led occupation armies have discovered in Vietnam, Iraq and Afghanistan, and as we can see right now in Iraq and Haiti, ordinary people still insist on having their say about the future of the world we all live in. U.S. policy is largely responsible for the life or death predicaments now facing young people in these countries, so they deserve our solidarity as they rise up to resist.

Medea Benjamin, co-founder of Global Exchange and CODEPINK: Women for Peace, is the author of the new book, Inside Iran: The Real History and Politics of the Islamic Republic of Iran. Her previous books include: Kingdom of the Unjust: Behind the U.S.-Saudi Connection; Drone Warfare: Killing by Remote Control; Don’t Be Afraid Gringo: A Honduran Woman Speaks from the Heart, and (with Jodie Evans) Stop the Next War Now (Inner Ocean Action Guide). Follow her on Twitter: @medeabenjamin

Nicolas J S Davies is the author of Blood On Our Hands: the American Invasion and Destruction of Iraq and of the chapter on “Obama At War” in Grading the 44th President: A Report Card on Barack Obama’s First Term as a Progressive Leader.

Our work is licensed under a Creative Commons Attribution-Share Alike 3.0 License. Feel free to republish and share widely.
Please click on: Crises in Militarized Neoliberalism
END_OF_DOCUMENT_TOKEN_TO_BE_REPLACED