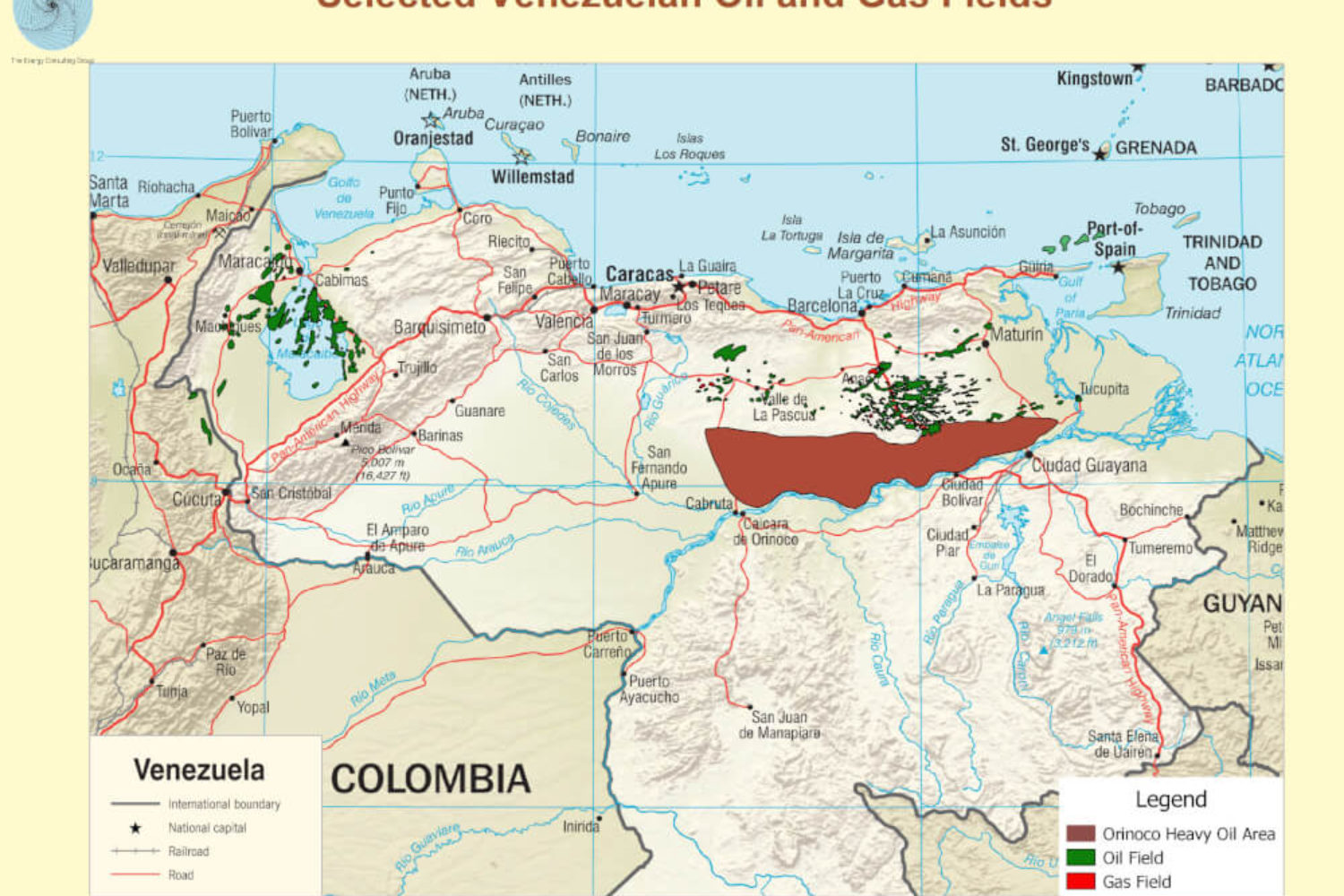 WN: An all-too-familiar story again is playing itself out in Venezuela. Western leadership, the U.S. in particular, foments lies and economic collapse towards regime-change goals. The article highlighted below tells thjat story. Similarly, “US ‘Regime Changes’: The Historical Record“, by Prof. James Petras tells a sobering story. See as well this hard-hitting article: “Venezuela – The U.S. Game Plan For ‘Regime Change’ And How To Respond To It“. In it we read:

This long planned U.S. move against the legitimate government of Venezuela is just the start. It is designed to lead to escalation and very soon mission creep – ‘We can’t stop here!’ – will set in. More than 300 billion barrels of oil, the biggest oil reserves in the world, are at stake. U.S. stooge Guaido promises to change Venezuela’s oil law to the advantage of the U.S., while the Bolivarian government uses the oil to support the poor.

The game plan for the current U.S. regime-change operation against the government of Venezuela was written by Senator Marco Rubio with the support of Vice President Pence:

The American recognition of Mr. Guaidó as Venezuela’s legitimate president is far more than a symbolic measure, and presents new complications for Mr. Maduro.

The idea was avidly promoted by Senator Marco Rubio, a Florida Republican who pushed the Trump administration to take such a step. In a speech to the Senate on Jan. 15, Mr. Rubio said that designating Mr. Guaidó as president would allow millions of dollars of Venezuelan government assets frozen in the United States to be at the disposal of opposition lawmakers, who could use them to fund new elections or humanitarian assistance.

The real amount the U.S. and Britain have ‘frozen’, or practically stolen, from Venezuela amount to several billion dollars, not just a few millions. Such ‘freezing’ of money owned by governments the U.S. does not like has become all too common. Together with a raft of other sanctions the economic war the U.S. has long waged against the country made the recovery of the Venezuelan economy nearly impossible.

William Blum noted that the U.S. generally prefers what its planners call “low intensity conflict” over full-scale wars. Only in periods of supreme overconfidence has it launched its most devastating and disastrous wars, from Korea and Vietnam to Afghanistan and Iraq.  After its war of mass destruction in Iraq, the U.S. reverted to “low intensity conflict” under Obama’s doctrine of covert and proxy war.

Obama conducted even heavier bombing than Bush II, and deployed U.S. special operations forces to 150 countries all over the world, but he made sure that nearly all the bleeding and dying was done by Afghans, Syrians, Iraqis, Somalis, Libyans, Ukrainians, Yemenis and others, not by Americans.  What U.S. planners mean by “low intensity conflict” is that it is less intense for Americans.

President Ghani of Afghanistan recently revealed that a staggering 45,000 Afghan security forces have been killed since he took office in 2014, compared with only 72 U.S. and NATO troops. “It shows who has been doing the fighting,” Ghani caustically remarked. This disparity is common to every current U.S. war.

In practice, “low intensity conflict” involves four tools of regime change: sanctions or economic warfare; propaganda or “information warfare”; covert and proxy war; and aerial bombardment. In Venezuela, the U.S. has used the first and second, with the third and fourth now “on the table” since the first two have created chaos but so far not toppled the government.

The U.S. government has been opposed to Venezuela’s socialist revolution since the time Hugo Chavez was elected in 1998. Unbeknownst to most Americans, Chavez was well loved by poor and working class Venezuelans for his extraordinary array of social programs that lifted millions out of poverty. Between 1996 and 2010, the level of extreme poverty plummeted from 40% to 7%. The government also substantially improved healthcare and education, cutting infant mortality by half, reducing the malnutrition rate from 21% to 5% of the population and eliminating illiteracy. These changes gave Venezuela the lowest level of inequality in the region, based on its Gini coefficient.

Since Chavez’ death in 2013, Venezuela has descended into an economic crisis stemming from a combination of government mismanagement, corruption, sabotage and the precipitous fall in the price of oil. The oil industry provides 95% of Venezuela’s exports, so the first thing Venezuela needed when prices crashed in 2014 was international financing to cover huge shortfalls in the budgets of both the government and the national oil company. The strategic objective of U.S. sanctions is to exacerbate the economic crisis by denying Venezuela access to the U.S.-dominated international financial system to roll over existing debt and obtain new financing.

The blocking of Citgo’s funds in the U.S. also deprives Venezuela of a billion dollars per year in revenue that it previously received from the export, refining and retail sale of gasoline to American drivers. Canadian economist Joe Emersberger has calculated that the new sanctions Trump unleashed in 2017 cost Venezuela $6 billion in just their first year. In sum, U.S. sanctions are designed to “make the economy scream” in Venezuela, exactly as President Nixon described the goal of U.S. sanctions against Chile after its people elected Salvador Allende in 1970.

Alfred De Zayas visited Venezuela as a UN Rapporteur in 2017 and wrote an in-depth report for the UN.  He criticized Venezuela’s dependence on oil, poor governance and corruption, but he found that “economic warfare” by the U.S. and its allies were seriously exacerbating the crisis. “Modern-day economic sanctions and blockades are comparable with medieval sieges of towns,” De Zayas wrote. “Twenty-first century sanctions attempt to bring not just a town, but sovereign countries to their knees.” He recommended that the International Criminal Court should investigate U.S. sanctions against Venezuela as crimes against humanity. In a recent interview with the Independent newspaper in the U.K., De Zayas reiterated that U.S. sanctions are killing Venezuelans.

While Venezuelans face poverty, preventable diseases, malnutrition and open threats of war by U.S. officials, those same U.S. officials and their corporate sponsors are looking at an almost irresistible gold mine if they can bring Venezuela to its knees: a fire sale of its oil industry to foreign oil companies and the privatization of many other sectors of its economy, from hydroelectric power plants to iron, aluminum and, yes, actual gold mines.  This is not speculation. It is what the U.S.’s new puppet, Juan Guaido, has reportedly promised his American backers if they can overthrow Venezuela’s elected government and install him in the presidential palace.

Oil industry sources have reported that Guaido has “plans to introduce a new national hydrocarbons law that establishes flexible fiscal and contractual terms for projects adapted to oil prices and the oil investment cycle… A new hydrocarbons agency would be created to offer bidding rounds for projects in natural gas and conventional, heavy and extra-heavy crude.”

The U.S. government claims to be acting in the best interests of the Venezuelan people, but over 80 percent of Venezuelans, including many who don’t support Maduro, are opposed to the crippling economic sanctions, while 86% oppose U.S. or international military intervention.

This generation of Americans has already seen how our government’s endless sanctions, coups and wars have only left country after country mired in violence, poverty and chaos. As the results of these campaigns have become predictably catastrophic for the people of each country targeted, the American officials promoting and carrying them out have a higher and higher bar to meet as they try to answer the obvious question of an increasingly skeptical U.S. and international public:

“How is Venezuela (or Iran or North Korea) different from Iraq, Afghanistan, Libya, Syria and at least 63 other countries where U.S. regime change operations have led only to long-lasting violence and chaos?”