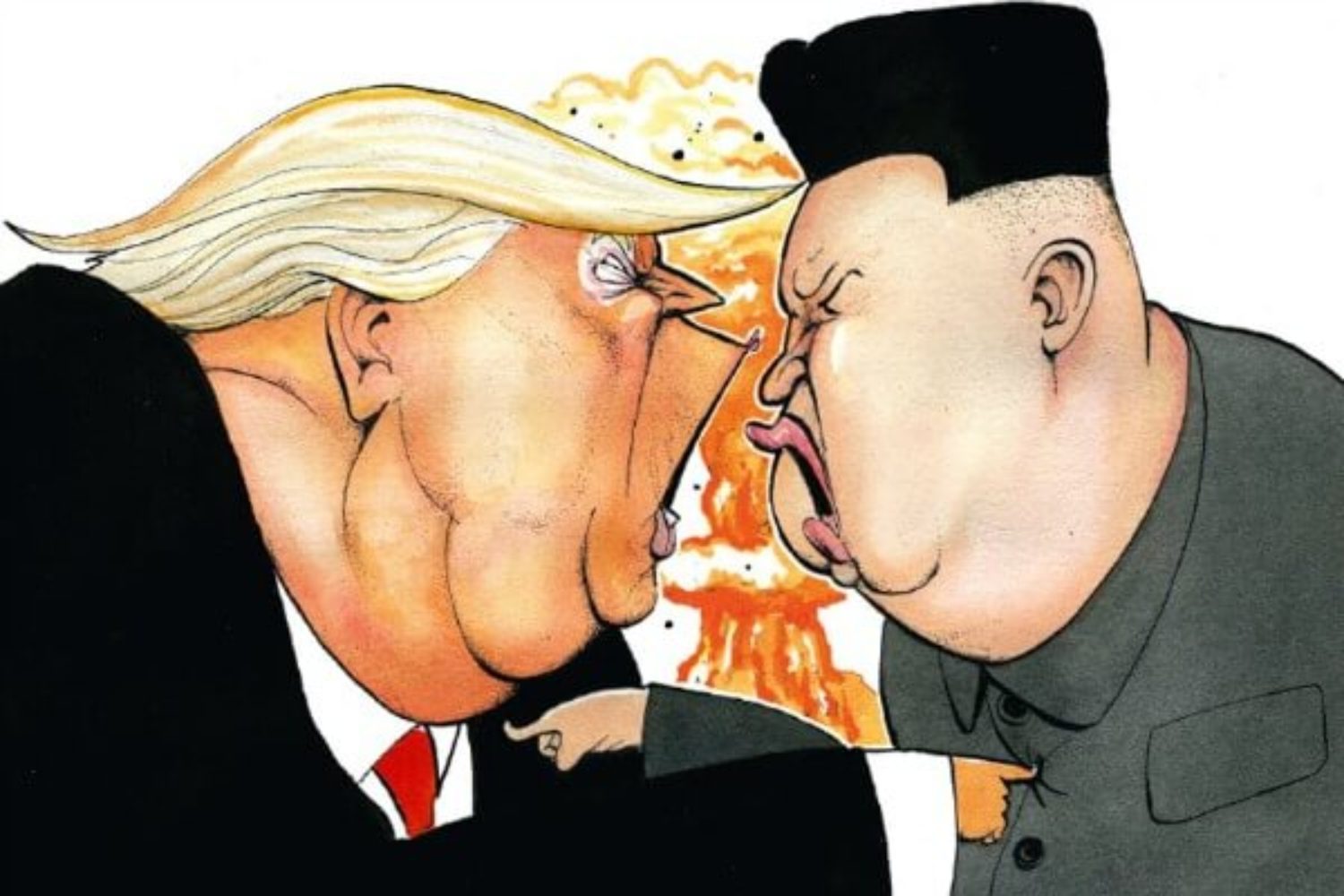 illustration above: by The Spectator

We can’t even. Tensions with North Korea continue to escalate, in large part thanks to the belligerent rhetoric of our moronic Narcissist-In-Chief – who, despite claims to the contrary, has not done anything  to “renovate and modernize” our nuclear arsenal. Though he has in fact fired the people who maintain them; put in charge of them Rick “I Am An Idiot” Perry, who knows virtually nothing about them; used his Big Boy pen some weeks back to order a review of them, which hasn’t yet happened because he’s fired everyone who could have done it; mouthed off about them being “locked and loaded” ’cause it sounds just like a super-cool action movie starring The Rock; prompted world-wide spiritual and economic anxiety; and all the while remained mindbogglingly, incoherently ignorant of precisely what it is those nukey things (that his uncle at MIT once told him about when he was a rich clueless lad rather than a rich clueless baby-man) actually do.

In response to this insanity, the bloodless souls at the Wall Street Journal decided to focus on What Really Matters and analyze – under the grotesque-cutesy headline, “How Do You Price A Problem Like Korea?” – how the stock market would fare in the case of a nuclear-fueled, “potentially uncontained military conflict.” Thus do we have financial strategists figuring the European Central Bank would implement “highly dovish forward guidance…and the yield curve would likely flatten (along with the world) due to weaker risk appetite,” that markets would fall 20% or so “before it became clear that the U.S. would prevail,” that “traditional market havens (would) become more complicated,” so aggressively buying German bunds, “perennial refuge of panicked investors,” might be better than the Japanese yen, problematically next door to Korea. Still, not to worry: “So far, markets have shown a muted impact. Investors are now pricing in just a 2% chance of a Federal Reserve interest rate cut in December, and while global stock benchmarks are on track for their worst week of the year, many bourses are still trading near multiyear highs, including South Korea’s Kospi index,” reflecting “the extreme difficulty the market faces in pricing in the ramifications of a nuclear confrontation.”

Yes, well. As normal people pointed out, in the actual case of nuclear devastation, “Stock market will drop to zero on account of everybody being dead. There, analyzed.” Others chimed in with realistic takes on a possible Trumpocalypse: The market will be bullish on canned goods, shotgun shells, iodine tablets, bottlecaps and cockroaches; analysts “may have to step away from their Bloomberg terminals ‘for a time’; people may be more worried about finding uncontaminated food and water and burying their burned loved ones than how their index funds and 401k are doing because, in the end, “The dead don’t care about markets.” They also raised vital questions for when “we have plunged into nuclear winter, cannibals roam the streets and I’m selling jewelry made out of human teeth on Etsy.” To wit: Will there still be free delivery from Amazon Prime? How do I reach my broker when Goldman Sachs is under a pile of smoking radioactive rubble? How are fried cockroaches? Would the bond market rebound after the annihilation of humanity? What about oil futures? What about her emails? And what the fuck is wrong with you people anyway?

On a more sober note: In case you need a reminder of what’s at stake here – we know, you probably don’t, but maybe you’re still speaking to some Trumpian acquaintance – here are newly declassified videos from Lawrence Livermore National Laboratory of multiple atmospheric nuclear tests conducted by the U.S. between 1945 and 1962. Also, a stunning short new film by Hashem Al-Ghaili called “The Final Moment” imagines the unimaginable. Trigger Warning: It’s disturbing. But so would be …you know.

Like Loading...
hotkey to site with series of films of declassified nuclear atmospheric tests from 1945 - 1962, Trump pathologically on lunatic fringe, Wall Street Journal conjecture on stocks in event of war with North Korea, world's Western leaders -- in particular US Presidents -- beyond madmen mass killers