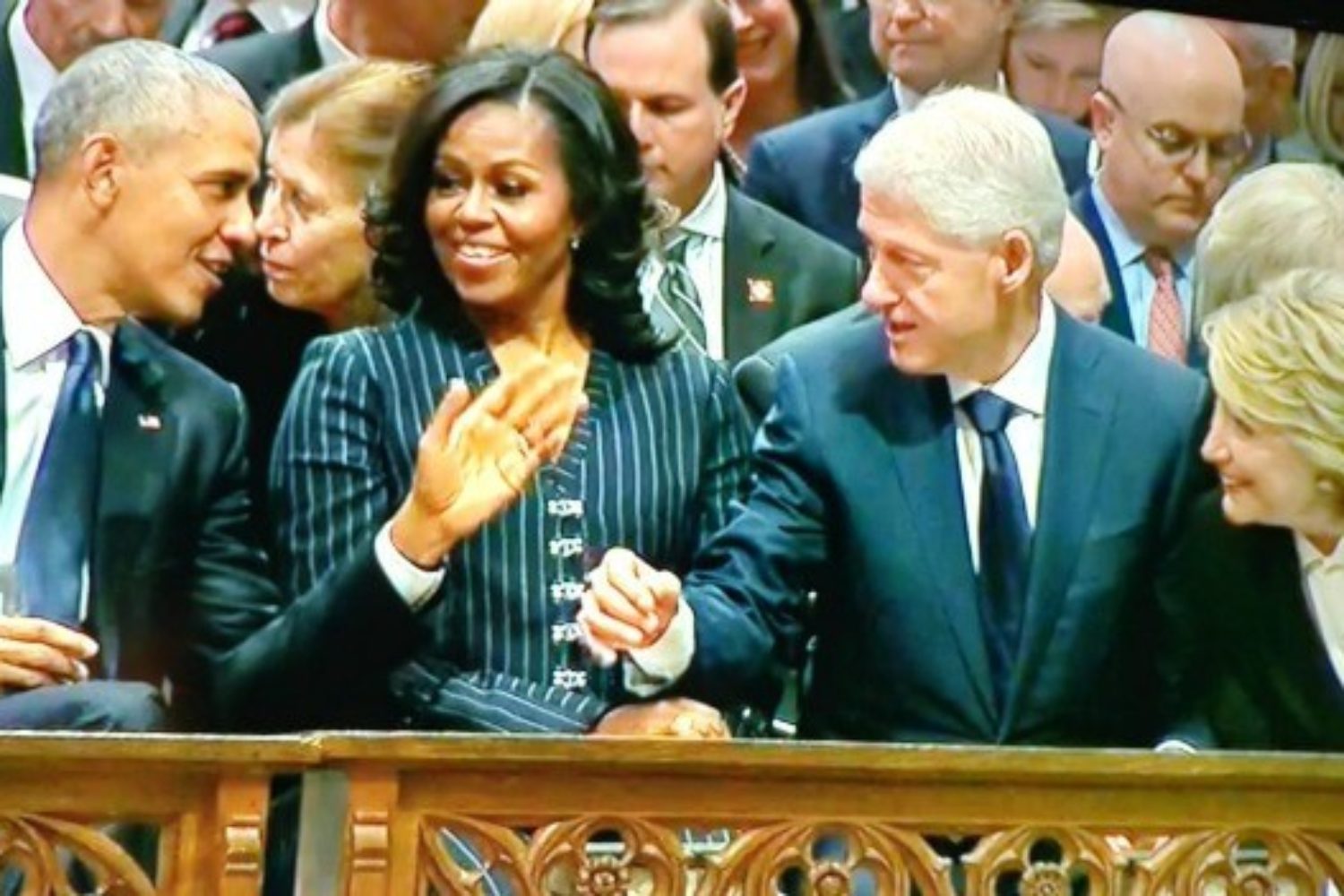 by Abby Zimet, staff writer
photo above: Before: Meet and greet fun. Screen shot. On front, the telling company he kept: George H.W. Bush with his Secretary of Defense Dick Cheney in 1990. Photo by Doug Mills/AP

WN: Of course any lineup of contemporary former Presidents is seen to have have acted as H. W. did. As have all previous Presidents… (White) America has been a vicious pillaging people from before its brutal Revolution on; before Manifest Destiny and the Great Expansion Westward. As Prof Kirk of C.S. Lewis note might say: “What do they teach those children about their history in schools anyway?!”
America: bastion of democracy; upholder of human rights; refuge for the downtrodden? Its historical reality since the Puritans has been the very inversion of all that makes for geopolitical decency on the Planet. Welcome to the real (American) world of largely unabated rapacious greed; marauding expansionism, brutal domination. Sadly enough too, “Prof Kirk” from the outset was largely co-opted into service of this implacable behemoth.
Trump the worst of the worst? Possibly. Symptom and exemplar of America’s national trajectory since before inception as peerless “axis of evil” — in quest of apotheotic ultimacy of same — no doubt. “Make America (as Ever) Evil Again” is his slogan reified in ubiquitous domestic and international impact.

There was the drama of the Awkward Pew, wherein the gathered political elites – Obamas, Clintons, Carters – enjoyed a smiling, affable meet-and-greet until the moment of Trump’s lumbering entry, at which point descended a sudden chill you could see, feel and damn near smell – and even a side-eye from the ever-civil Jimmy Carter – followed by a sour series of snubs, pouts and scowls by a hunched-over Trump “glaring like a constipated vulture.” And there were the speakers extolling Bush virtues – decency, dignity, integrity – that were once viewed as standard presidential attributes but were now seen as barbed slams against a current president who wholly lacks them.

Unsurprisingly, those lofty speeches ignored the multiple crimes that are nonetheless Bush’s legacy. The narratives of an avatar of goodness and civility left out Bush’s wars, his lies about the wars, the innocent blood on his hands. They left out the racism he stoked, the drug war he expanded, the scourge of incarceration he helped create. The lying to Congress and obstruction of justice. The support of Pinochet’s murder of thousands of Chilean dissidents. The cruel myth of trickle-down economics that never trickled down. The political hack and sexual abuser Clarence Thomas. And his “murderous neglect” during a lethal AIDS crisis summed up by the chant, “History will recall/George Bush did nothing at all.” Calling out Bush’s failure to use his immense power, writes Garance Franke-Ruta, “is about honoring the deaths of others who were equally beloved to their communities, but far from equal in power…Bush may have been lovely to those inside the circle of concern, but he drew that circle narrowly during a moment when it would have meant the world to draw it larger.”

Insidiously, writes Peter Birkenhead here and, slightly longer, here, the portrait of that personally lovely, decent Bush muddies the truth of the costs of his patrician arrogance, the “dinner-jacketed decorum” with which he sought “Washington’s most cherished ideal: permanent impunity for the political elite” – just like Trump, he notes, with less decorum and more vulgarity. In a town of brutal power games paired with mock propriety “where they disapprove of eating dead babies with a salad fork,” Trump’s offenses are of tone, not substance: His positions and those of the kinder, gentler Bush are largely the same – on taxes, terrorism, voting rights – with both essentially promising “richer rich people and terrified brown people.” Fighting Trump, he warns, means fighting the notion he represents “an aberration rather than an inevitable culmination” of GOP politics: “The people who want us to believe that George H.W. Bush was radically different from Donald Trump want to make people like Trump more powerful and the world he envisions more possible. They just want them to have better manners.”