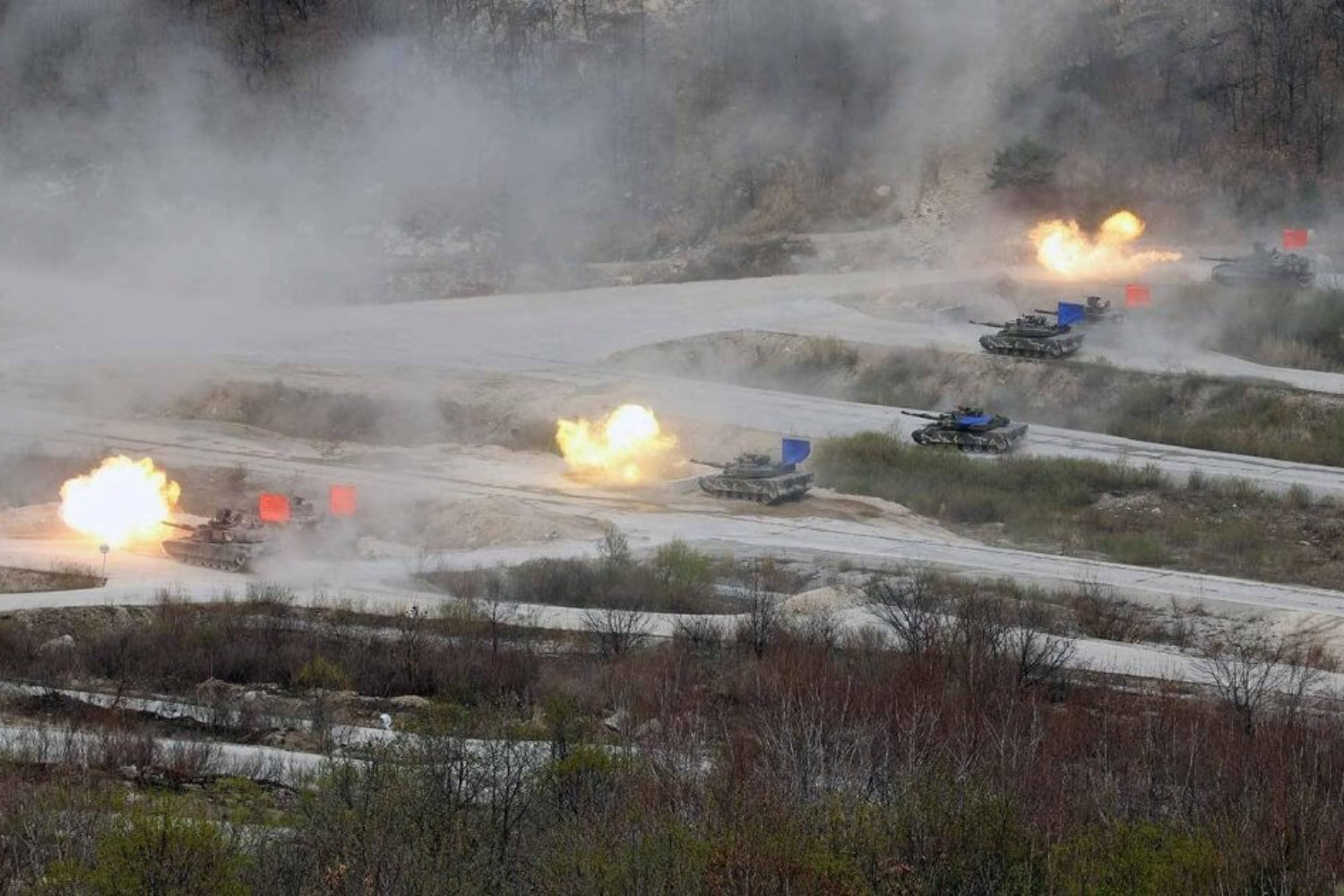 We may not like it, but nuclear weapons may be all that stands in the way of another US-conducted “regime change.”

WN: Once it sinks in that the US Empire is the greatest danger to the Planet, with Trump Planet

Enemy Number One¹, and that the first casualty of any kind of international conflict leading to military action is the truth, the logic of North Korea’s position over against the United States tragically makes total sense – however reprehensible is its build-up of arms. Please also see several articles on US warmongering against North Korea in the past seventy years here². See also here for a series of articles on US warmongering across the globe.

North Korea’s recent missile launches … pose a threat–not to the safety of the U.S. population, as the corporate media claim, but to the United States’ strategic calculus in the region…
Objectively speaking, there is no difference between North Korea’s missile tests and the others [including recent U.S. tests], although it should be pointed out that the U.S. arsenal of nearly 7,000 nuclear warheads dwarfs that of North Korea…

The political and economic might of the United States gave it the means to prod other members of the UN Security Council to agree to its demand to impose sanctions on North Korea. As a result, North Korea is the only nation singled out by UN sanctions that forbid it from testing the same types of missiles as other countries are free to do. There is no legal basis for this double standard, which is primarily a product of U.S. influence…

In the Western mindset, none of [the large-scale military exercises that the United States regularly conducts in tandem with South Korea ] can be construed as being “provocative” or a “threat” to North Korea. But it is easy enough to imagine the hysterical reaction if Russia were to conduct joint military exercises in Cuba, practicing the bombing and invasion of the United States, along with the assassination of U.S. political leaders…

Therein lies the greatest hypocrisy behind U.S. condemnation of North Korea’s nuclear and missile tests. Because the U.S. has no problem with India, Pakistan and Israel possessing nuclear weapons, it has seen no need to make such a pronouncement [that no one else besides the five officially-recognized nuclear weapon states should have nuclear weapons]…

North Korea says its nuclear program “is a legitimate and righteous measure for self-defense to protect the sovereignty and the right to existence” of the nation. [18]…

The reason why stopping North Korea’s nuclear and long-range missile program is a priority for the Trump administration is not because it truly believes North Korea will launch an ICBM at the United States. Rather, it’s that if North Korea succeeds in establishing an effective nuclear deterrent, then this could have serious geopolitical implications for U.S. policy, as other targeted nations may follow North Korea’s example to ensure their survival…

The more belligerent Washington becomes, the more convinced North Korea is that it needs a nuclear deterrent. For its part, North Korea has recently reiterated its position that unless the United States drops its hostility, it will not give up its nuclear program. [20]

The “North Korean threat” has been by turns on and off our front pages since Donald Trump took office six months ago. Now it is decisively on, in my read. “Strategic patience”—Washington’s euphemism for having no idea what to do—has had its day, as the president and various members of his cabinet regularly declare. An administration that has yet to deploy a single coherent foreign policy in any context the world over now must figure one out.

Tuesday’s launch is not so big a deal as Washington and its media clerks have made it: It is a step, no more, toward intercontinental capability. Kim’s claim on Wednesday is a maybe at best, even if the policy cliques find it convenient to take this one more seriously than others in the past. But there is no time left for dithering or denial: We know now that the danger of a nuclear confrontation between two exceedingly hostile powers is a few years off and drawing closer.

A clearer case of reaping what one sows I cannot think of.

I urge readers and viewers to note a few things common in all the press coverage and all expressions of official thinking on North Korea.

One, more or less everything that is said will be ahistorical. Leaving out history, causality, agency, and responsibility was the irreducible Cold War template, as readers old enough to remember will know well enough. Plainly and simply, this is what we are served once again. The power of history to clarify is rarely so self-evident as it is in the case of Korea. This is why all we read, hear, and see in the media has this odd, flat surface—two-dimensional accounts, wherein nothing happened before yesterday. In his books and in his pieces here and elsewhere, Bruce Cumings, the perspicacious Chicago historian, has made the transformative force of history irrefutably clear—and so tips the official narrative upside down. (See here and here.) The case is not at all hard to grasp. What is so easily cast as totalitarian paranoia is well, well grounded in the Korean experience of America’s merciless brutalities during the Korean War—these understood by the easily available accounts of the generals responsible for them. The predictable consequences of American conduct since, bang on North Korea’s borders and off its shores, could hardly be more obvious. History: It is always one’s friend. Don’t leave home without it.

Two, the elephant in the room since August 6, 1945, now grows fatter by the day. I refer to the irrationality of the hyper-rational—the illogic of the logic of nuclear weapons. Nobody wants to talk about the inevitability of their self-perpetuation. The world is haunted by these devices because—and at this point only because—those who have them decline to give them up while promising incessantly they want and intend to. Keep them, and others, most of all adversaries, will develop them. China, when we called it “Red China,” was such a case. Pakistan is a more recent example. Iran, faced with Israel’s nuclear arsenal, was due to become another. North Korea is an extreme case, but at bottom nothing more than a variant. We can put a trillion dollars into modernizing our nuclear weaponry, sure. No one can stop us. Do we think there is no consequence? We Americans, in the bubble we have inflated for ourselves and now dwell quiescently within, are far from reality in any number of ways. But are we this far? We have nuclear-armed missiles aimed at Pyongyang and lately let our twitchy fingers show. Now the North tests an ICBM and we hike up our skirts?

Three, arising out of the above, there is the matter of deterrence. On this question the sound position is very simple. One must stand opposed to all that makes deterrence a necessity. But one must stand entirely for it when circumstances make it necessary to prevent conflict. In Washington now and in the press, people talk and write about the very finest points of a nuclear attack: If we can “take them out” in so many minutes, they may have so many minutes to do this, that, or the other. But if we do it this way, maybe not. What about “decapitation”—we go for Kim himself? Can you imagine how this comes over in Pyongyang? Nobody in Washington seems to give this question any thought. In sum, I do not approve of North Koreans’ new ICBM any more than anyone else’s, but I can see perfectly well why they built one, and satisfactory enough they have it until the United States drops the Strangelove act and gets serious about a solution. Deterrence: The old Cold Warriors taught me all about it.

Like Loading...
North Korea's unacknowledged logic over against the US Empire, the US worldwide has been reaping what it sowed in "The American Century", Westerners need to give their heads a shake