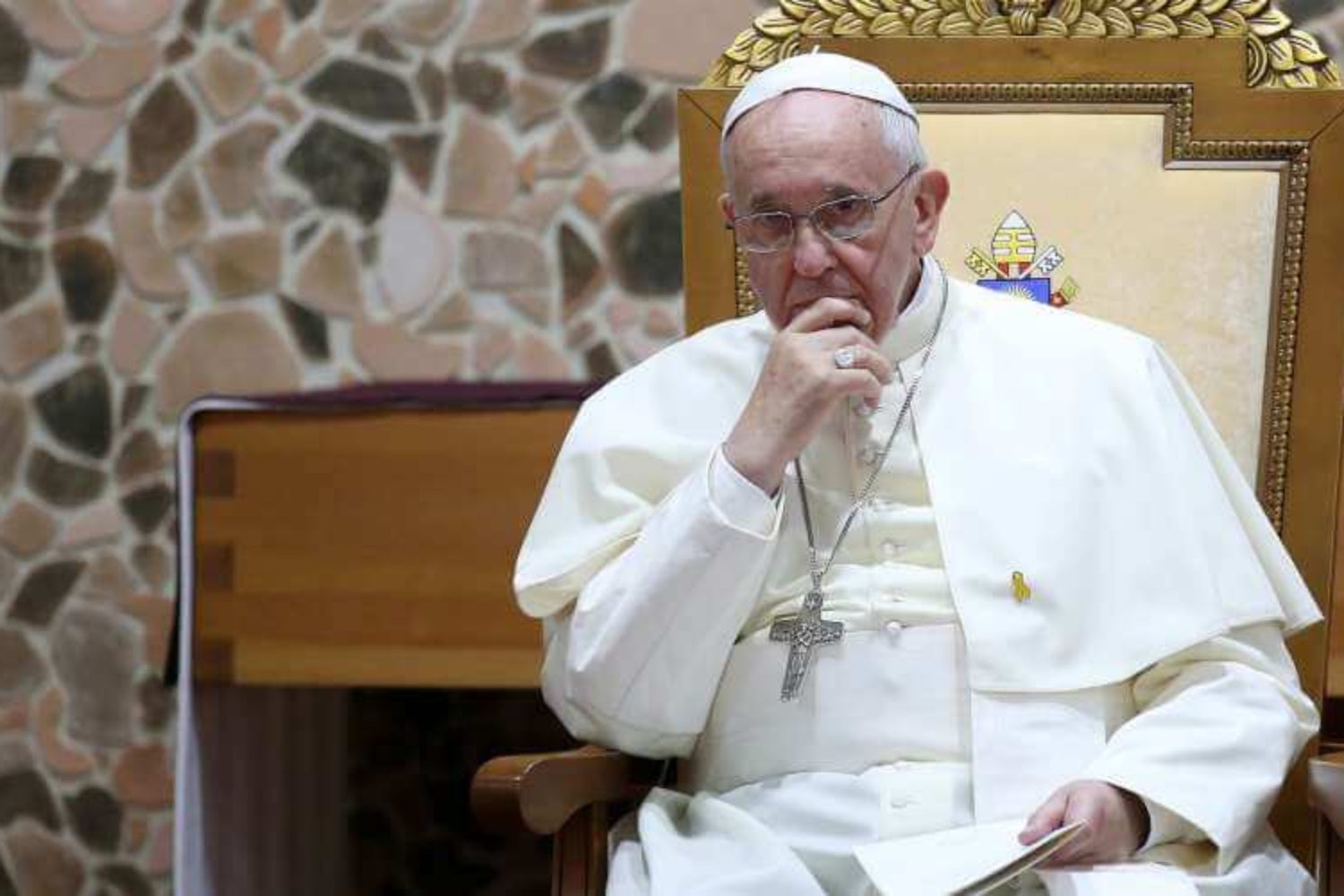 At a seminar at the Vatican, Pope Francis praised the U.N.’s recent anti-nuclear weapons treaty

photo above: Pope Francis called for nuclear disarmament at a Vatican summit on Friday, a week after an emotional anti-war speech at a military cemetery in Italy. (Photo: Republic of Korea/Flickr/cc)

WN: It is incomprehensible that American universities and top scientists, including Albert Einstein, ever in the first place developed the atom bomb. It is beyond all horror and all base human morality that the top leaders of the Western world blessed the development of nuclear weapons and their deployment – twice! – in August 1945 against Japan. And it surpasses all imagination that these nuclear weapons of mass destruction exist in the world today by multiplied thousands – and exponentially worse on the drawing tables in the West right now.

As I write on my Home page:

General (George) Lee Butler, a “nuclear warrior” in the early years of the Cold War (that many claim began with the dropping of two atomic bombs on Japan, August 1945), spent 27 years in nuclear policy-making. He eventually in an overt mea culpa became a passionate proponent for outright nuclear abolition. He self-published Uncommon Cause: A Life at Odds With Convention (volumes I & II). He catalogued a long list of disturbing experiences:

In retrospect, he decried the “wantonness,” “savagery,” “reckless proliferation,” “treacherous axioms,” and voracious “appetite” of deterrence — for which he himself had helped create many systems and technologies, including “war plans with over 12,000 targets.”…

“Elegant theories of deterrence,” he exclaimed in one speech, “wilt in the crucible of impending nuclear war.” In later recollection of the folly of deterrence, Butler pointed out that at its peak the United States “had 36,000 weapons in our active inventory,” including nuclear landmines and sea mines and “warheads on artillery shells that could be launched from jeeps.” He concluded that mankind escaped the Cold War without a nuclear holocaust by some combination of diplomatic skill, blind luck and divine intervention, probably the latter in greatest proportion. (ibid, pp. 36 & 37).

Nuclear strategist Albert Wohlstetter described this longstanding policy as a “delicate balance of terror (ibid, p. 27).” In short, any number of nuclear war planners in Washington contemplated striking 295 Soviet cities, with an estimated death toll total of 115 million, and another 107 million dead in Red China, besides millions more in Soviet satellite countries (ibid, pp. 28 & 29). In some circles, as a kind of sick dark humour, the two bombs dropped on Hiroshima and Nagasaki due to “only” 200,000 dead, came to be called “firecracker nukes (ibid, p. 29).” (This is not to mention the millions killed since World War II with related devastation in at least 37 countries around the world, or the millions murdered through US proxy wars, CIA covert operations the world over, surrogate terror exported to countries throughout Central and South America for more than a century, and other parts of the world, etc., etc., etc… (See ibid, throughout the book.)³)

— including for instance General Douglas MacArthur. The American public likewise supported this in general (ibid, p.41). This is America — Leader of the Free World?! Vocabulary for such gargantuan evil mindsets utterly fails! Yet every US Administration since Truman authorized the first atomic bombs dropped (which phenomenon he, a Baptist Sunday School teacher, declared to be “the greatest event in human history” — and not the Resurrection?! — one massively death-dealing, the other universally life-giving), along with thousands of strategists, day-in, day-out, went off to work with this kind of obscene potential horror, like “visions of sugar plums dancing in their heads”. How delightfully American (Empire)!¹

I add today and somewhat reiterate: Since 1945, the West — every Western world leader, every Westerner — is implicated, is accessory to this Murderous Madness Intention, in its blithe acceptance of all this. The West is nothing short of a collective Raving Madhouse, its leaders to a person compliant accessories to the intent to commit mass murder on a scale exponentially vaster than the most bloodthirsty mass murderers all combined of all time!

And tomorrow, I/we awaken with a cup of coffee in hand, and go on with our day… Sheer colossal moral implosion — by all human decency standards in the world!

_________________________
¹ I just came across this article (December 7. 2017) by renowned whistle-blower Daniel Ellsberg, which title points to again what is utterly chilling, horror-filled, exponentially beyond immoral, American (hence the world’s) reality: “Daniel Ellsberg: U.S. Military Planned First Strike On Every City In Russia and China … and Gave Many Low-Level Field Commanders the Power to Push the Button” He has since written The Doomsday Machine: Confessions of a Nuclear War Planner. Of it we read:

From the legendary whistle-blower who revealed the Pentagon Papers, an eyewitness exposé of the dangers of America’s Top Secret, seventy-year-long nuclear policy that continues to this day.

Here, for the first time, former high-level defense analyst Daniel Ellsberg reveals his shocking firsthand account of America’s nuclear program in the 1960s. From the remotest air bases in the Pacific Command, where he discovered that the authority to initiate use of nuclear weapons was widely delegated, to the secret plans for general nuclear war under Eisenhower, which, if executed, would cause the near-extinction of humanity, Ellsberg shows that the legacy of this most dangerous arms buildup in the history of civilization–and its proposed renewal under the Trump administration–threatens our very survival. No other insider with high-level access has written so candidly of the nuclear strategy of the late Eisenhower and early Kennedy years, and nothing has fundamentally changed since that era.

The pontiff’s speech came a week after he made a plea for an end to “useless massacres” in an anti-war speech at a military cemetery in Italy, in which he alluded to the rising tensions between the U.S. and North Korea, exacerbated in recent months by President Donald Trump’s bellicose threats in response to Kim Jong-un’s nuclear tests.

Pope Francis argued that the insistence on maintaining nuclear arsenals by nations including the United States, North Korea, and France “creates nothing but a false sense of security,” and therefore total disarmament is the only acceptable solution.

Nuclear weapons, he said, “exist in the service of a mentality of fear that affects not only the parties in conflict but the entire human race. International relations cannot be held captive to military force, mutual intimidation, and the parading of stockpiles of arms.”

“Weapons that result in the destruction of the human race are senseless even from a tactical standpoint,” added the pope.

Pope Francis also expressed “gratitude and appreciation” for the U.N.’s recent treaty calling for an elimination of nuclear weapons. The agreement was adopted in July, but all the nuclear states abstained from voting. So far, three parties have ratified the treaty.

The seminar signified a shift in the Catholic Church’s tolerance of the existence of nuclear programs. Bishops in the U.S. expressed a “strictly conditional moral acceptance of deterrence” but the Pope’s recent remarks indicate that the conditions may now call for a policy change.

“The church’s tolerance of deterrence was predicated on it being a step toward disarmament,” said Stephen Colecchi, director of the U.S. bishops’ conference’s Office of International Justice and Peace, in an interview with the National Catholic Reporter. Today, regimes are “planning modernization of nuclear weapons. You don’t modernize a weapons system that you intend to disarm from. So I think deterrence is on very thin moral grounds.”

Like Loading...
And we play the fiddle while the Planet burns (in the West's wildest dreams - which are designed nightmares of Planet-extinction horror), Pope Denounces 'Mentality of Fear' Caused by Nuclear Regimes, the West a vast Madhouse in blithe acceptance of Nuclear (and otherwise) WMD's with far bloodthistier intent on an exponentially vaster scale that we can today imagine, Urges Disarmament