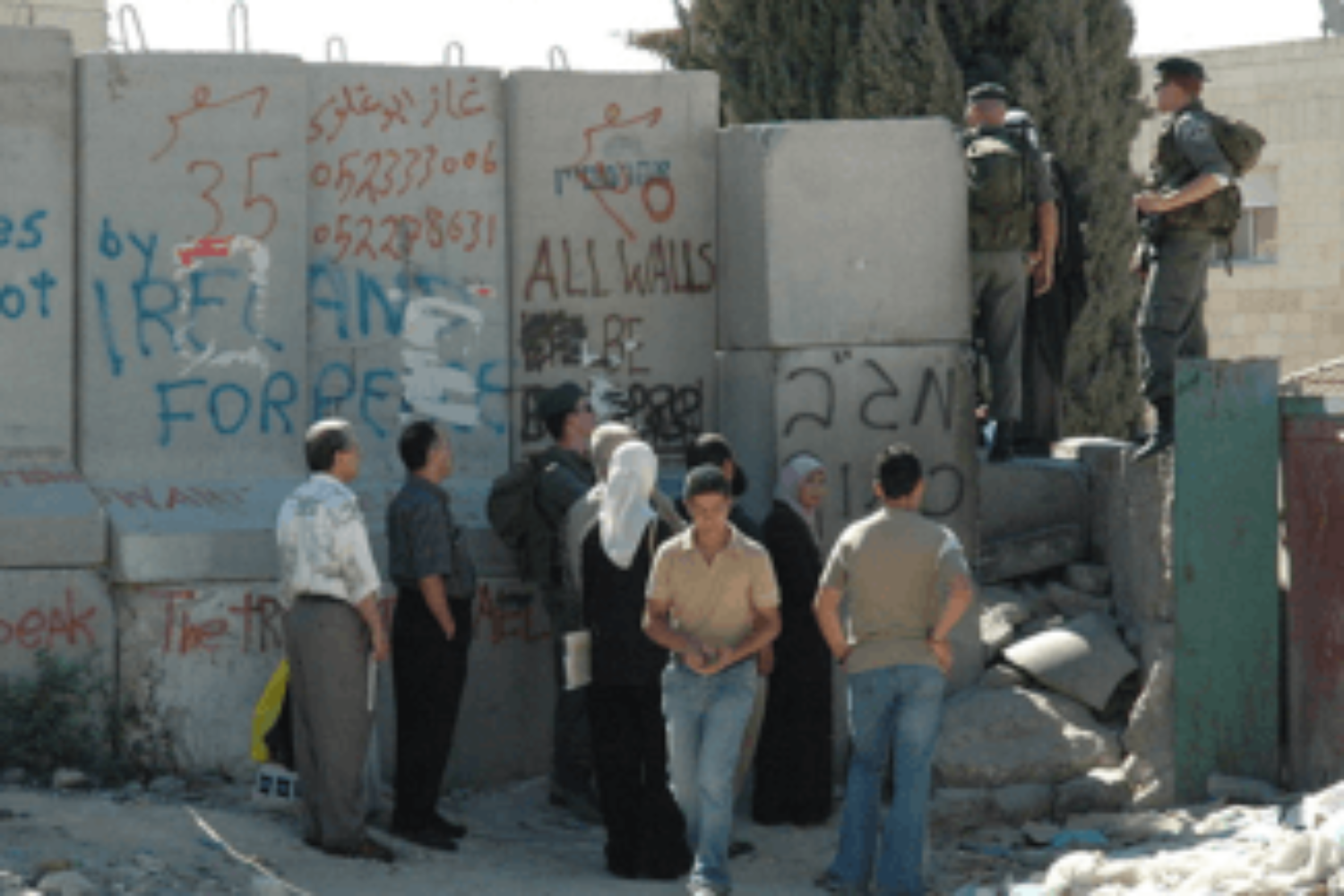 Listen to this article
by Taurean J. Webb  (a FOSNA Board member)

photo above: A checkpoint in the Israeli Barrier in the West Bank, near Abu Dis. Photo taken by Justin McIntosh, uploaded via Wikimedia Commons

There is a voice emerging from the prophetic Black Christian faith tradition, called to speak directly against the evil(s) of this illegal military occupation. The prophetic Black Church—cohorts within the Afro-Christian community that understand themselves as firmly rooted in the tradition of the biblical prophets, speaking truth(s) to systems of power and injustice—stands within an important tension. This tradition understands Jesus’s work as significantly political; not “political” in an electoral sense, but “political” in terms of speaking against settler-colonialism, imperial conquest and the death-conditions of empire. Contrary to what some might assert, this prophetic claim is absolutely not advocating the destruction of a people-group.

Unfortunately, the current socio-political milieu makes it difficult to critique the State of Israel without eliciting counter-criticisms of being anti-Semitic and allegedly “advocating destruction” of the sovereign state. But it is precisely the love for all Divine creation—not the desired destruction of a segment of it—that motivates the prophetic Black faith claim against illegally and militarily occupying, displacing and devastating entire racial-ethnic groups labeled “other” merely because of the State’s core commitment to maintain an ethnically homogenous Jewish politic.

For the prophetic Black faith tradition, this claim is a moral and ethical one. It is also a claim that could potentially allow the Black Church to reclaim a critical part of its sacred history: standing firmly upon its moral imperative. Although not a majority, a critical cohort within the African American Christian tradition (during the US “Civil Rights Era”) stood upon claims grounded in an ethic of justice and a conviction that all persons were created wonderfully by the mechanisms of Divine craftsmanship. These claims ranged between indicting a US nation-state that did not live up to its alleged creed to critiquing an unjust international wartime atmosphere that wrongly assumed the United States to be the moral leader of the democratic free world.

Retuning to this justice ethic is no easy feat, significantly because the mainstream US Afro-Christian tradition has failed to evacuate the hetero-normative paternalism that has gradually progressed (within it) since the earliest days of Black Church inculcation of white supremacist thought. Stated plainly, the Black Church standing upon its history of moral justice and outrage does not mean that it has a monopoly on moral truth(s). It does not mean that the church is necessarily effective in its efforts to advance good, offer correctives or spread kindness. And it certainly does not mean that the Black Church can get “off the hook” for the ways in which it continues to imbibe logics of “racial reconciliation” and “religious tolerance” that veil many longstanding assumptions about its own assumed piety, at the expense of others. Such pitfalls are part and parcel of being saturated within a cultural context that is profoundly colonial and paternalistic. They require the Black Church, indeed the prophetic Black Church, to remain vigilant.

Part of the vigilance should involve calling things by their rightful names. For purposes of political correctness and social acceptability, Black Americans tend not to use language of “colonialism,” “imperialism,” and “white supremacy.” But the State of Israel, much like the US, is facilitating a white supremacist racial caste. There is a deliberate internal ordering and hierarchizing of society, based on who is designated the “most and least valuable”—all en route to perpetually creating and maintaining an ethnically homogenous nation-state.  This does not mean that facilitators of the racial ordering should be destroyed, but that structurally, the politic was established to ensure equality, fairness, love, justice and security only for some and not others.

Finally, the vigilance of this significant work must consist in the prophetic Black church (and the Black Church, generally) more robustly knitting together the diverse fabrics of human experience. The moral voice of the church, if nothing else, ought to remind us all that everyone has been made within the maelstrom of divine energy. This very making binds us together.  So often when this language surfaces, it is undergirded with secretly held contempt, sprinkled with tokenism. But beyond the place where “valuing diversity” is merely the cool new thing to say, perhaps we are within a moment ripe with possibility. Perhaps we can learn how to better sit with others—those with whom we agree and disagree, and those whom we have failed or refused to understand—and journey with them through their stories so that we can resurface differently.  Perhaps idealistic, but there is something hopeful about the gift of speaking one’s truths (no matter how painful, bitter or ugly) and inviting others to share their own. The beauty of it was wrapped up, for me, in our host’s final words. After she gave account of her family’s life under occupation, she concluded, “Our oppressors treat us like we’re their servants. They do. But, nothing lasts forever…”