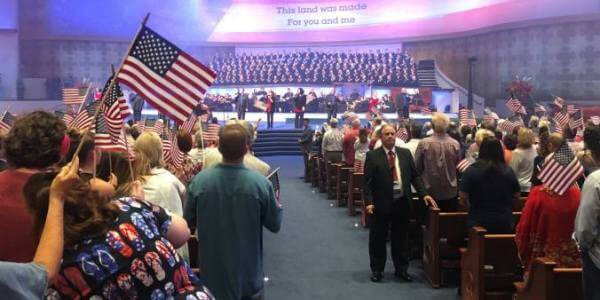 photo above: First Baptist Church of Dallas on “Freedom Sunday”

WN: “Salvation Industrial Complex” (S.I.C.)  is a new one on me, and quite apt! So is the entire article, that is highlighted below. The author’s book also looks quite interesting: especially when so much evangelical theology has a belief system whereby the only salvation/rescue needed by humanity is from “god almighty” and his beyond-imagining fiendish hell of eternal conscious torment.

Now if we added to S.I.C., for those in on the secret, the word “Know-how” (to beat the Bad Rap…ture), we’d have a perfectly descriptive acronym for that kind of white evangelical theology…

The theology of the white evangelical salvation industrial complex and the ideology of “Make America Great Again” (by keeping out immigrants) are mutually reinforcing. To say that undocumented immigrants shouldn’t be called “illegal” is as heretical as saying that non-Christians should be allowed into heaven. Calling undocumented immigrants “illegal since what they did was illegal” accommodates the same emotional need for “clarity” as saying that “marriage is between a man and a woman” or “salvation is through Jesus alone.”

Now let me clarify some things about my views on immigration and salvation. I do believe in heaven and hell. And I believe that it’s valid for countries to have borders and orderly systems for controlling who crosses those borders and under what circumstances. My objection to white evangelical theology and Trumpist ideology is the presumptuous oversimplification involved in both and the anxious need for clear black and white lines that is the definitive core of these interconnected thought systems.

As a recovering alcoholic, I know that hell is very real and I’ve come to understand heaven as the serenity of union with Christ that I am constantly pursuing. Being justified by Christ rescues me from my defensive self-justification which allows me to liberated from sin by the sanctification of the Holy Spirit. That’s how I tell the story as a Wesleyan Christian. But because of the complicated stories and beliefs of the people I’ve met in the recovery world and other places, I am unwilling to say that what I call “union with Christ” cannot possibly be attained through a non-Christian set of spiritual practices and vocabulary. I’ve met too many people who exude Christ without speaking the way that I do about him. My theology doesn’t have a clear wall and it doesn’t collapse as a result.

Our immigration system is broken in two primary ways that I see:

A much better investment of $5 billion than building a wall would be to revamp our immigration system and hire tens of thousands of case managers, social workers, and judges who could oversee a more rational temporary worker visa system and refugee process. Building a wall through terrain that is mountainous and filled with private land and complex ecosystems makes zero sense from a practical standpoint. Its function is idolatry. It is a graven image built to the fake demonic god of certainty who loves walls more than he loves humanity.

Check out my book How Jesus Saves the World From Us!