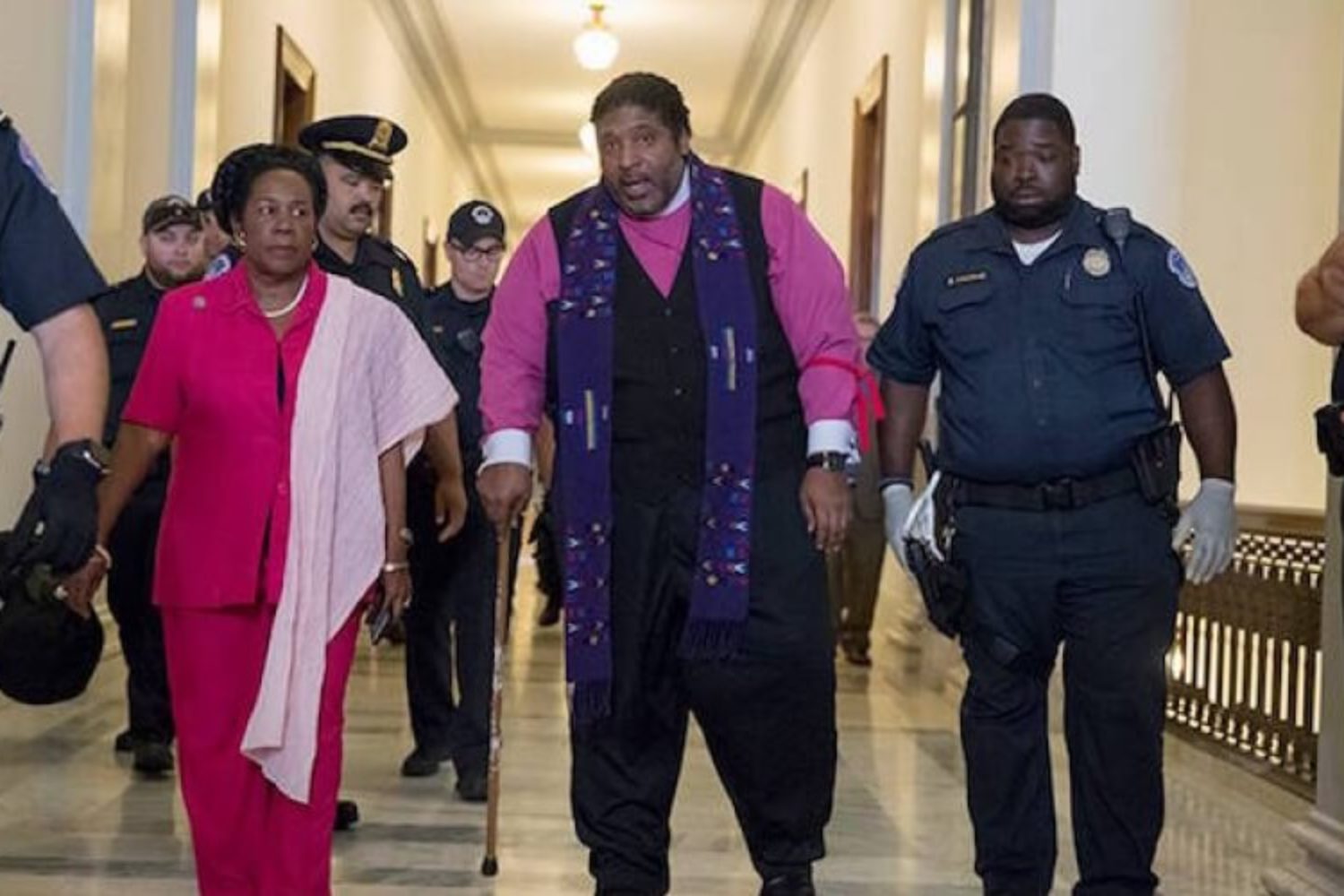 photo above: arrest of Rev. Barber. “It’s time,” writes Rev. Barber, “for those of us who are called to proclaim and embody God’s Word to put on our clerical robes, take up our holy books, and speak truth in the public square.”

On Thursday, July 13th, Senate Leader Mitch McConnell unveiled the latest version of his last ditch effort to repeal and replace Obamacare, whatever the cost. In obedience to Jeremiah 22, which says that God’s messengers must go to the seat of power and challenge the abuse of power, I led a delegation of clergy to make a prophetic and pastoral visit to McConnell’s office on Thursday morning. We brought copies of the Bible and pointed to those verses which make clear our obligation to both care for the sick and establish justice for the poor.

We went to do what every preacher makes a vows to do: we proclaimed the Word of the Lord.

People for them are only things—ways of making money. They’d sell a poor man for a pair of shoes…. They grind the penniless into the dirt, shove the luckless into a ditch.

That’s Amos, the prophet from Tekoa.

Woe unto you who legislate evil, who rob the poor of their right and make widows and orphans your prey.

That’s the prophet Isaiah, who saw the Lord in the year that King Uzziah died.

Your politicians are like wolves prowling and killing and rapaciously taking what they want. Extortion is rife, robbery is epidemic, the poor and needy are abused, outsiders are kicked around at will, with no access to justice.

That’s Ezekiel, who preached life to a valley of dry bones.

The Rev. Dr. William J. Barber II is the architect of the Forward Together Moral Monday Movement, president of the North Carolina NAACP and pastor of the Greenleaf Christian Church (Disciples of Christ) in Goldsboro.

Like Loading...
Christians must rise up like the prophets of old and denounce Trump's anti-Christ policies, Christians to speak truth to power in public square, Rev. Dr. William J. Barber II, white Evangelical support for Trump policies "hypocrisy and sin"