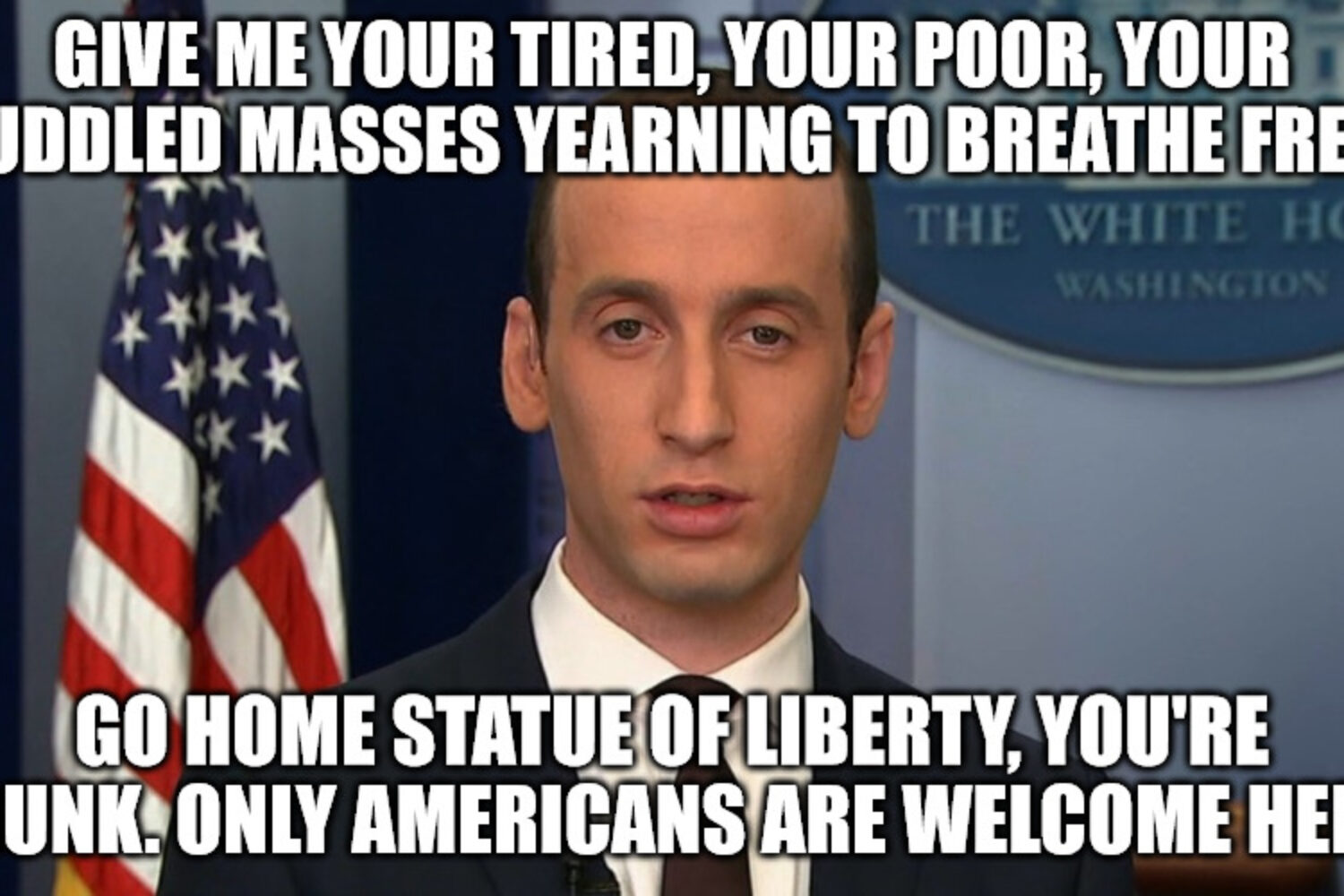 WN: I confess to sitting back in sheer wonderment at the gargantuan monstrosity of endless prevarications spewing forth from seemingly all spokespersons for the current US administration, of whom Trump bar none is Chief! According to Politifact, in excess of 69% of his statements are chronically falsehoods!  Indeed: this administration from the top down would have made Joseph Goebbels jealous. Already, one of the administration’s top liars, Michael Flynn, barely lasted a few weeks before biting the dust… If similar standards were enacted on the rest of the White House rabble, in no time the entire administration would have to be replaced. But with what?, one wonders. Under Trump: another avalanche of inveterate liars and another, and another… If the stakes were not so world-impacting high, it would be simply a gargantuan laughing matter!

Stephen Miller a snot-nosed kid with a bad attitude, advertised as White House senior policy adviser, delivered himself of some stern jeremiads on Sunday on Meet the Press, along with many Big Lies of which Joseph Goebbels would be jealous.

It is dreary to see a Republican White House once again fall into the clutches of grandiose fantasists and drooling conspiracy theorists.  We saw this with Karl Rove and Irv “Scooter” Libby in the Bush years.  The arrogance, the big globe-straddling ambitions, the spit in the face of average people, and above all the Big Lie.  What is it about today’s Republican Party that drives it into the arms of high-end hucksters and confidence men?  Maybe it’s the cognitive dissonance of being a servant to the .01% but pretending to want to help average folks.

After denouncing the third branch of government, given powers of legislative review by the Constitution, Miller said:

“our opponents, the media and the whole world will soon see as we begin to take further actions, that the powers of the president to protect our country are very substantial and will not be questioned.”

We have seen these unimaginative scenarios so many times.  The media as the enemy (you can’t outdo tricky Dick Nixon on that one).  The whole world having to be impressed.  Have you *met* any French people?  Believe me, Stephen, they aren’t impressed.  They can’t get past those ears, and wonder what happened to your hair.  And we haven’t even gotten to your boss.  And, then, sigh, the unquestioned power of the president.  What’s the matter, “unitary executive” too hard for you to say?

Then there were Miller’s Giga-lies about undocumented people voting in the millions.  Or maybe they are tera-lies.  A lot of bytes go into a lie that huuuje.

But it is banal and ennui-inducing by now.  We’ve been there, done that.  We had to form a whole new internet group the last time, the “Reality-Based Community.”  I guess it is time to dust back off that blogger.com comment section from 2004.