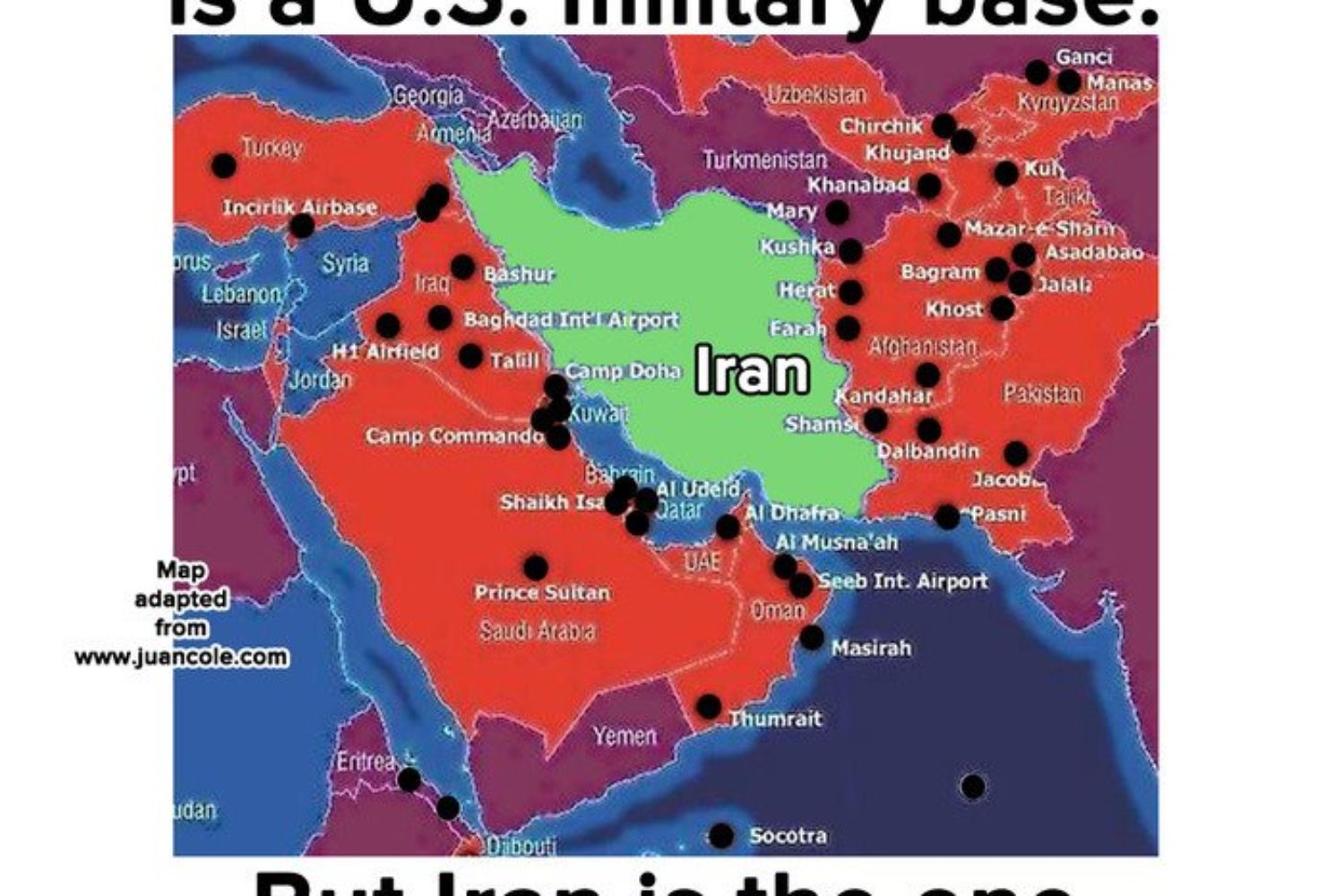 WN: One rightly asks, in light of the map showing U.S. military bases encircling Iran, “Who is the aggressor/terrorist here?”

Exactly 17 months have passed since President Donald Trump precipitously withdrew from the Iran nuclear agreement, officially known as the Joint Comprehensive Program of Action, or JCPOA. Two and a half months later, on July 22, 2018, Secretary of State Mike Pompeo delivered a speech to a group of Iranian expatriates at the Ronald Reagan Presidential Library, in Simi Valley, California. “[T]he United States,” Pompeo said, “is undertaking a diplomatic and financial pressure campaign to cut off the funds that the regime uses to enrich itself and support death and destruction.” The crowd launched into generous applause, after which Pompeo delivered his main point. “We have an obligation to put maximum pressure on the regime’s ability to generate and move money, and we will do so.”

The Trump administration, Pompeo stated, would reimpose sanctions on Iran’s banking and energy sectors. “[O]ur focus,” he concluded, “is to work with countries importing Iranian crude oil to get imports as close to zero as possible by Nov. 4, [2018]. Zero.”

The ostensible purpose of the “maximum pressure” campaign was to get Iran to withdraw from the JCPOA and return to the negotiating table, where a new, more restrictive agreement would be crafted that eliminated its nuclear enrichment program, curtailed its ballistic missile program and reduced its influence in the Persian Gulf. However, given Pompeo’s embrace of the regime-change mantra of the Iranian expat community—a sentiment he shared with Trump’s then-national security adviser John Bolton—the “maximum pressure” campaign could only be interpreted as an act of economic warfare against Iran, as prelude to an eventual military campaign designed to remove the Shi’a theocracy that has ruled the country since assuming power in 1979. Bolton himself emphasized this when he stated in November 2018 that “[i]t is our intention to squeeze them very hard. As the British say: ‘Squeeze them until the pips squeak’.”

This is where the narrative gets interesting. Rather than retreat in the face of U.S. military pressure, Iran doubled down. Months before, in December 2018, Iranian President Hassan Rouhani had warned that “America should know that we are selling our oil and will continue to sell our oil and they are not able to stop our oil exports. If one day they want to prevent the export of Iran’s oil, then no oil will be exported from the Persian Gulf.” At the time, the Trump administration saw Rouhani’s statement as empty bluster. It wasn’t.

But rhetoric alone does not win the day. The problem for the United States has been that its campaign of “maximum pressure” has had zero impact on Iran’s so-called “malign activities” in the region. In July 2019, Iran test fired a ballistic missile with a range of more than 1,000 kilometers. A defiant Iranian spokesperson tweeted that “Iran’s missiles are absolutely and under no condition negotiable with anyone or any country, period.”

The Iranian missile test came amid a growing crisis between Iran and the United Kingdom over the tit-for-tat seizure of oil tankers. In early July, British Royal Marines boarded and took control of the Iranian oil tanker Grace 1, claiming that its load of oil was destined for Syria in violation of EU sanctions. Iran responded by boarding and seizing the British oil tanker, Stena Impero, as it navigated the Strait of Hormuz.

Complicating matters further was Iran’s announcement in early July that it was suspending another JCPOA-imposed limitation on its nuclear program, breaching the 3.67% cap on the level of uranium enrichment allowed under the agreement. As the world debated Iran’s suspension of JCPOA commitments, its ongoing tanker war with the U.K., and its testing of ballistic missiles, another front was opening that would test the U.S. “maximum pressure” campaign like no other.

Iran had one more card to play. Three days after Bolton’s dismissal, the Houthi followed up on their threat to continue attacking Saudi oil infrastructure with a bold strike on two Saudi oil processing facilities, inflicting massive damage that knocked out 50% of Saudi Arabia’s oil production capacity, or some 6% of global oil supplies. Saudi oil production was the lynchpin to the “maximum pressure” campaign; without it, there was no means of offsetting the loss of Iranian oil production brought on by sanctions. Moreover, the ease with which the Houthi had destroyed Saudi oil production infrastructure highlighted the future of all Gulf Arab oil production should there be a general war with Iran. In one fell swoop, Iran, through its Houthi proxies, had laid bare the naked truth about the U.S-Saudi defense relationship: There was literally nothing the U.S. could do, despite investing hundreds of billions of dollars into the Saudi military, and deploying hundreds of billions of dollars more in terms of U.S. military forces into the region, to protect the life’s blood of the Saudi Kingdom—oil. The U.S. decision to deploy a single Patriot surface-to-air missile battery and three air defense radars to protect Saudi oil fields from further attack was nothing more than a face-saving measure; while both the U.S. and Saudi Arabia blamed Iran for the attack, no one could pinpoint where the attack originated from, meaning they had no idea how to defend themselves against any future incursion.

The Houthi drone attack proved to be the final nail in the coffin of the U.S. “maximum pressure” campaign against Iran. Saudi Arabia, recognizing the precarious position it has found itself in, has greenlighted talks with Iran to resolve their regional differences. Despite an abortive effort to finesse a meeting between Trump and Rouhani at the U.N. General Assembly, both the U.S. and Iran appear prepared to engage in negotiations once Iran’s conditions regarding the lifting of sanctions are met, something the EU strongly supports. If Trump’s goal in implementing the “maximum pressure” campaign was to eventually bring Iran to the negotiating table, then he may very well have succeeded. But history will show that it was Iran that set the conditions that brought the U.S. onboard, and not the other way around.

In May 2018, the myth of American military deterrence in defense of Saudi Arabia was still alive; today it lies shattered amidst the ruins of the destroyed Saudi oil facilities. Seen in this light, the collapse of the U.S. campaign of “maximum pressure” can only be interpreted as a strategic victory for Iran, and a decisive defeat for the United States.