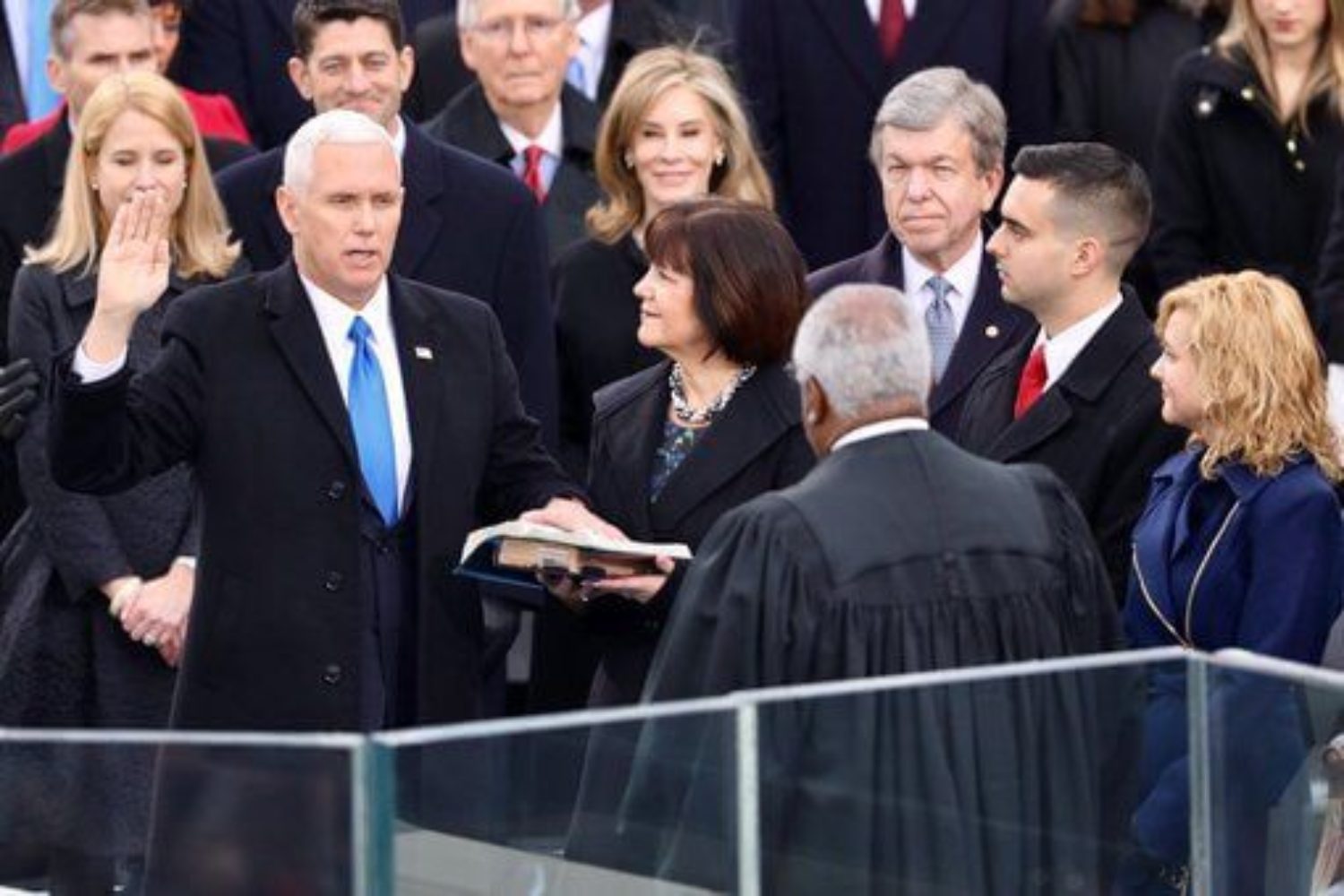 WN: This is a powerful broadside against the Ultimate Bad Guy on the Planet: the Evil Empire of the United States of America! The vehemence is found not only in the colourful language, but even in the typos . . .

The impeachment of Donald J. Trump is coming. What to make of it? It’s hard not to enjoy watching the Malignant One (Trump) squirm and lash out like a wounded animal. There is no public humiliation too great for this sorry excuse for a human being, this racist, sexist, eco-cidal and fascist bastard who endangers the world with his presence in its most powerful office. Trump’s noxiously racist, sexist, Nativist, plutocratic, corrupt, and environmentally disastrous regime has done great damage to basic democratic and human norms, civilizational decency, social justice, and prospects for a decent future. All of that and more makes it impossible for any self-respecting leftist or progressive not to want to see him disgraced and removed. The Trump-Pence regime must be forced out of office as soon as humanly possible.

But forced out how, for what reasons, and with what kind of vision for the post-Trump future? Impeachment requires just a simple majority of the House of Representatives and that branch of Congress is majority Democrat. The betting odds are that it will take place.

Removal requires two-thirds of the Senate and that branch is majority Republican. That odds of removal are low. And the removal of Trump would have to be preceded or followed by the removal of Vice President Mike Pence, a Christian Fascist who is slated to ascend to the White House after Trump’s removal under the rules of the U.S. Constitution.

The best way to remove Trump is not merely through elite procedures designed by wealthy 18th Century slaveholders, merchant capitalists, and publicists for whom democracy was the ultimate nightmare. It is through a sustained mass rebellion by and for those the U.S. Founders and the American ruling class today fears most: We the People, the working-class majority. We should mobilize to bring this regime down in the same way the people of Puerto Rico recently forced out their corrupt and racist-sexist governor Ricky Rosello, the same way the people of Hong Kong won the repeal of an authoritarian extradition law, and the same way the masses of Algeria overthrew an authoritarian regime last year.

Impeachment just for UkraineGate – just for Trump’s violation of ruling class norms by using the bribe of American military assistance to extort a foreign government into digging up dirt on his perceived next presidential challenger, the right-wing corporate-imperialist Joe Biden? United States House Speaker Nancy Pelosi (D-CA, Net Worth-$64 million) appears to want to make this the sole case for impeachment because UkraineGate seems open and shut, easy to understand, unlike RussiaGate (and more like the Watergate scandal that forced Richard Nixon out of the White House in 1974). But the Republicans and the right-wing noise machine will make sure that it’s not so simple, counter-spinning with conspiracy theories about Biden and his son and Hillary’s emails and the Steele Dossier, etc. And limiting the scope of impeachment to UkraineGate is a cover-up. An activist Website gives the following daunting list of offenses for which the aspiring fascist strongman Trump deserves impeachment: Violation of Constitution on Domestic Emoluments; Violation of Constitution on Foreign Emoluments; Incitement of Violence; Interference With Voting Rights; Discrimination Based On Religion; Illegal War; Illegal Threat of Nuclear War; Abuse of Pardon Power; Obstruction of Justice; Politicizing Prosecutions; Collusion Against the United States with a Foreign Government; Failure to Reasonably Prepare for or Respond to Hurricanes Harvey and Maria; Separating Children and Infants from Families; Illegally Attempting to Influence an Election Tax Fraud and Public Misrepresentation; Assaulting Freedom of the Press; Supporting a Coup in Venezuela; Unconstitutional Declaration of Emergency; Instructing Border Patrol to Violate the Law; Refusal to Comply With Subpoenas; Declaration of Emergency Without Basis In Order to Violate the Will of Congress; Illegal Proliferation of Nuclear Technology; Illegally Removing the United States from the Intermediate-Range Nuclear Forces Treaty.

All of these are legitimate impeachment and removal subjects. I would add one: the criminal acceleration of Ecocide, the biggest issue of our or any time. Trump has brazenly violated his oath to serve the General Welfare by doing everything he can to turn the world into a giant Greenhouse Gas Chamber as soon as possible.

Never forget Noam Chomsky’s criticism of the de facto impeachment and removal of Richard Nixon: Watergate was about Nixon’s breaking of ruling class norms by needlessly burglarizing the other major imperial party’s candidate headquarters. The Watergate hearings evaded Nixon and Kissinger’s mass murderous bombing of Cambodia, Laos, and Vietnam, Nixon and Kissinger’s criminal support for a fascist coup in Chile, and Nixon’s vicious, fascist-style police-state repression of the antiwar, Black freedom, and radical Left movements. Nixon’s biggest crimes went un-aired and unpunished. It was officially fine for Nixon to inflict monumental murder and mayhem on anti-imperial freedom-fighters, peasants, and the Left at home and abroad. Nixon’s only authorized sin was to have stupidly messed with the other American ruling class and imperial party, the Democrats, at home.

We on the portside want to put the “rabble” – the working-class majority citizenry – in the streets en masse to confront not just the fascistic Trump-Pence regime and the fascistic Trump movement but also the broader bipartisan, Ecocidal empire and oligarchy of which the Trump regime and Trumpism are both part and symptom. Trump is awful, of course. But so is the Christian Fascist Pence and so is the richly bipartisan system of class and imperial rule that gives rise to monstrous white-nationalist forces and actors like Trump, Pence, and Trumpism in the first place. The Democrats, accurately described by Upton Sinclair in 1904 as one of “two wings of the same bird of [American corporate and imperial] prey,” are no angels. Behold this recent report from the corporate business network CNBC:

“In recent weeks, CNBC spoke to several high-dollar Democratic donors and fundraisers in the business community and found that this opinion was becoming widely shared as Warren, an outspoken critic of big banks and corporations, gains momentum against Joe Biden in the 2020 race. ‘You’re in a box because you’re a Democrat and you’re thinking, “I want to help the party, but she’s going to hurt me, so I’m going to help President Trump,”’ said a senior private equity executive, who spoke on condition of anonymity in fear of retribution by party leaders. The executive said this Wednesday, a day after Speaker Nancy Pelosi announced that the House would begin a formal impeachment inquiry into Trump” (emphasis added).”

Read that report again and let it sink in: “several” top Democratic Party election bankrollers are ready to back the revolting racist, sexist, eco-exterminist, malignant narcissist, and neo-fascist Trump over and against not just the progressive populist and self-declared socialist Bernie Sanders but even over and against the self-declared “capitalist” and center-left Democrat Elizabeth Warren!

Here it is important to note that impeachment is a mobilizer for Trump’s ugly and armed mass of white nationalist Amerikaners. It is also a great incentive for Clockwork Orange himself to pull some epically nasty shit: to start a shooting war with Iran, invade Venezuela, concoct a new terrorist menace, activate some among his army of racist mass-shooters, and/or flirt with thermonuclear “fire and fury.” We must all now be on watch for how this malignant monster may go Medieval. He is a deranged and wounded beast with some awful cards in his devilish deck.

Sitting around and waiting for the masters and their holy Constitution to fix things is a great mistake. We need urgently to mobilize the people to bring down this neofascistic regime and the gruesome capitalist and imperial system that gave rise to it.

Before “Insane in the Ukraine” broke out, I thought a long-overdue mass mobilization moment could come when Orange Thing refuses – as he has essentially promised – to leave after being narrowly defeated in the 2020 election. Now I think maybe it could arrive when Monster Mitch McConnell flatly refuses to even hold a Senate trial after the House impeaches Donito Assolini either later this year or early next year. If Sonofabitch Mitch was willing to shut down an Obama Supreme Court appointment hearing – an incredibly brazen authoritarian act – you can be damn sure he won’t allow a post-impeachment Senate trial of Donald Trump.

But it’s not about the crystal ball or about waiting for the elites to move. The time to organize and act to get rid of this regime and the lethal system that produced it is now. In the absence of sustained mass and mobilized pressure from below, the machinations of the elites will hold the day, with disastrous consequences.

Mourn what the masters have done to this world and then organize, organize, organize. We need to take the current split within the nation’s decrepit and geocidal establishment beyond the reigning investor and professional classes’ definition of great historical change. They are literally running this nation and the entire planet into the ground. Only a great and sustained movement of millions can provoke the real political crisis we need.