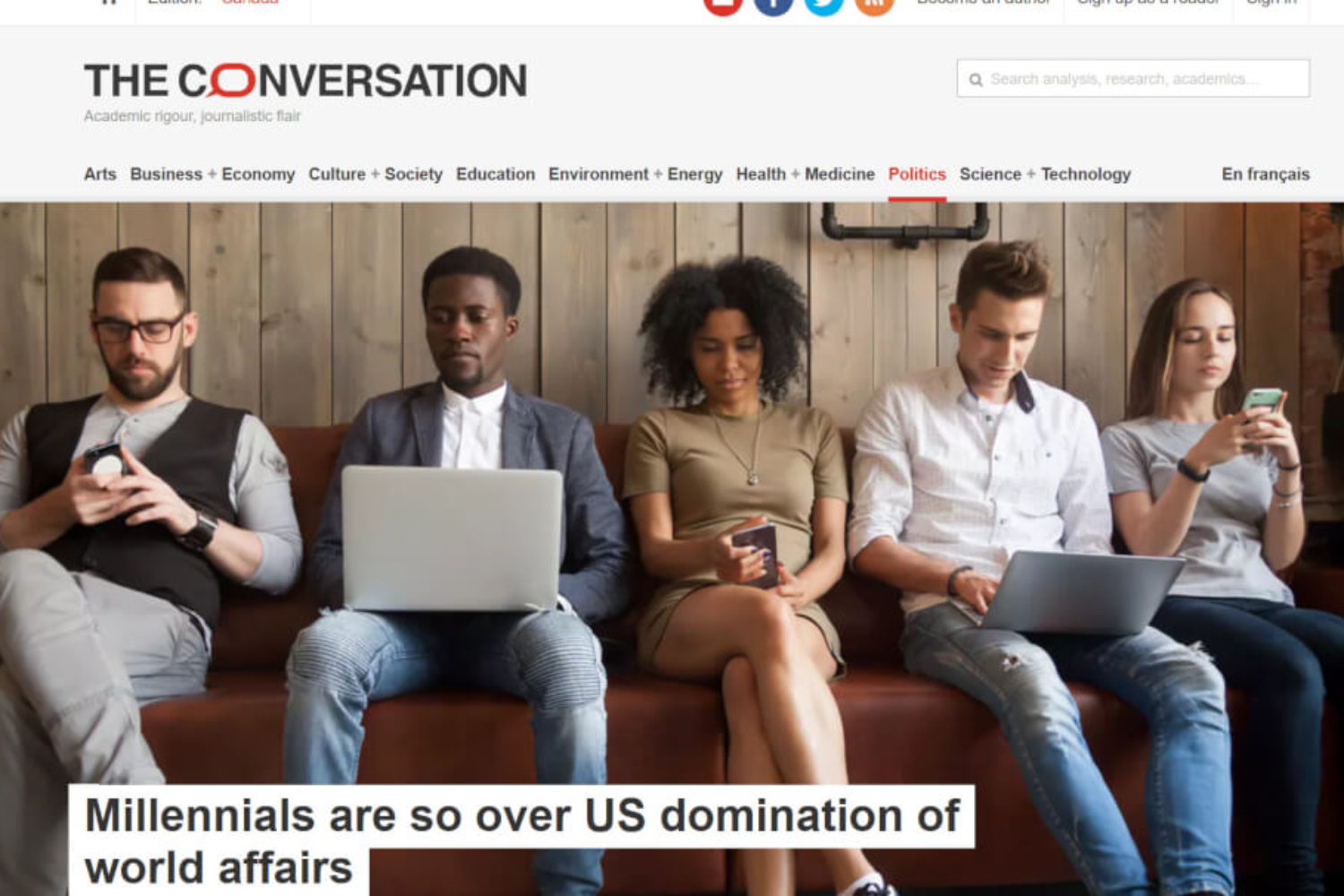 photo above: Millennials are not into the ‘We are the greatest country’ idea. Shutterstock

WN: The article highlighted below is immensely hopeful – if millennials stay the course. Its final paragraphs read – significantly understated that they are:

What are the implications and impact on foreign policy politics of millennials’ views?

In my opinion, even more significant than issue-specific positions is millennials’ disinclination to buy into American exceptionalism. These younger Americans show a greater willingness to get beyond the “We are the greatest country” paeans. Such exceptionalism, subscribed to more avidly by older generations, takes a rose-colored view of American foreign policy’s history and ignores the profound changes shaping the 21st century world.

In this respect in particular, we’d do well to learn from millennials’ more measured views.

This article is also very hopeful: “Democratic party elites silence Ilhan Omar at their peril“. In it we

This week Democrats plunged into two controversies that portend danger for the party as the 2020 election season begins. Both centered on freshman representative Ilhan Omar of Minnesota, who, not coincidentally, came to America as a Somali refugee and is now one of the two first Muslim women in Congress. Absent an open debate about the party’s values on foreign policy, Democrats are hurtling toward an election more divisive than the one in 2016.

First, on Monday, Omar criticized the influence of pro-Israel lobbyists on Capitol Hill, tweeting that Congress’s stance was “all about the Benjamins”. She was swiftly rebuked by the party leadership in tandem with Republicans, prompting her to apologize. Then, less than 48 hours later, Omar grilled America’s new envoy to Venezuela, Elliott Abrams, over his well-documented material support for multiple Central American governments that committed mass killings and genocide in the 1980s. She also questioned his credibility, noting that Abrams had pleaded guilty to withholding information from Congress as part of his participation in the Iran-Contra scandal.

How did Democratic elites respond? Several pounced again – to defend the Trump administration’s backer of death squads against Omar’s pointed questioning. Kelly Magsamen, a senior official at the Center for American Progress, defended Abrams on Twitter as a “fierce advocate for human rights and democracy”. Likewise, Nicholas Burns, a 27-year diplomat who most recently advised former secretary of state John Kerry, praised Abrams as a “devoted public servant”. “It’s time to build bridges in America,” Burns wrote, “and not tear people down.”

If Democratic leaders were incredulous at Omar’s statements, rank-and-file Democrats were just as incredulous at their party leaders. Why, many asked, is it routine to criticize the influence of NRA money but almost forbidden to question the influence of Aipac money? On top of that, how could Trump’s neocon criminal be lauded as some sort of ally while Omar was treated as a pariah? A Twitter torrent caused Magsamen to delete her tweet and apologize.

This article is also so hopeful about the role played by Ilhan Omar: “‘I know what intolerance looks like’: Ilhan Omar takes her turn in the spotlight“.

Millennials, the generation born between 1981 and 1996, see America’s role in the 21st century world in ways that, as a recently released study shows, are an intriguing mix of continuity and change compared to prior generations.

For over 40 years the Chicago Council on Global Affairs, which conducted the study, has asked the American public whether the United States should “take an active part” or “stay out” of world affairs.

This year, an average of all respondents – people born between 1928 and 1996 – showed that 64 percent believe the U.S. should take an active part in world affairs, but interesting differences could be seen when the numbers are broken down by generation.

Military power: Only 44 percent of millennials believe maintaining superior military power is a very important goal, much less than the other generations. They also are less supportive of increasing defense spending.

• American ‘exceptionalism’: Millennials also were much less inclined to embrace the idea that America is “the greatest country in the world.” Only half of millennials felt that way, compared to much higher percentages of the other three generations. In a related response, only one-quarter of millenials saw the need for the U.S. to be “the dominant world leader.”

These findings track with the 2014 American National Election Study, which found that while 78 percent of silent, 70 percent of boomer and 60 percent of Gen X respondents consider their American identity as extremely important, only 45 percent of millennials do.

• Alliances and international agreements: Millennials are especially supportive of NATO, at 72 percent. In this measure, they are close to the other generations’ levels of NATO support. Their 68 percent support for the Paris climate agreement is higher than two of the other three age groups. And their 63 percent support for the Iran nuclear nonproliferation agreement is even with boomers and higher than Gen X.

Seventy-two percent of millennials support NATO. In this measure, they are close to other generations’ levels of NATO support.

• Globalization and key trade issues: Millennials’ 70 percent agreement with the statement that “globalization is mostly good for the United States” is higher than all the other age groups. Similarly, 62 percent believe that NAFTA (North American Free Trade Agreement) is good for the U.S. economy – well above the others surveyed. The margin is also positive although narrower on the Trans-Pacific Partnership trade agreement.

These and other polls show millennials to have a world view that, while well short of isolationist, is also not as assertively and broadly internationalist as previous generations.