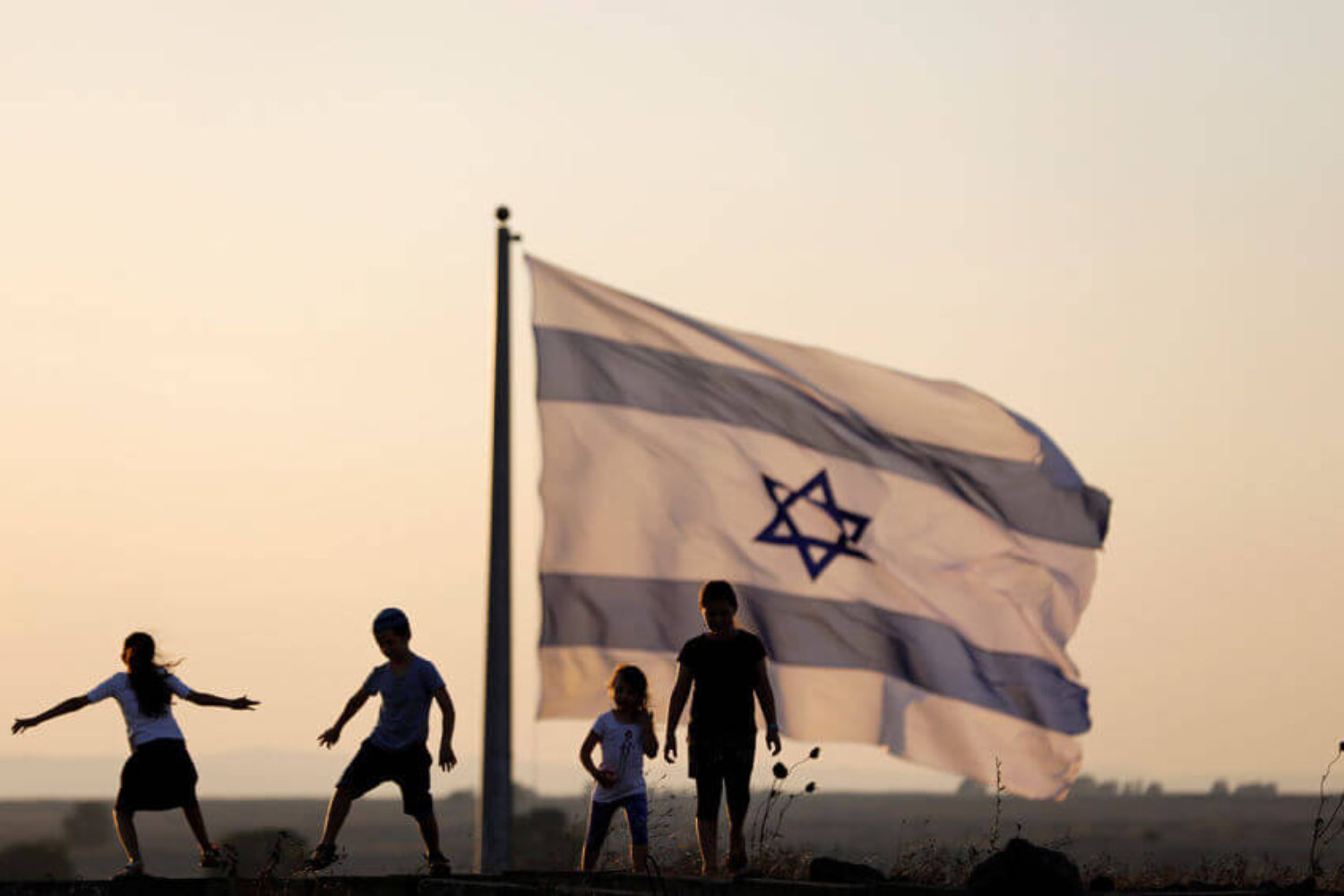 A never-shown Al Jazeera documentary on the pro-Israel lobby in the United States reveals possibly illegal Israeli spying on American citizens, and the lobby’s fear of a changing political mood.

photo above: Kids play next to an Israeli flag near the Israel-Syria border at the occupied Golan Heights in July 2018. (Reuters / Ronan Zvulun)

WN: Israel is a brutal Empire1 like, only on a smaller scale, the United States. It is no surprise that both Empires have long since been in bed together. All Empires go to whatever lengths to protect not human rights and democracy, but the “rights” (read “greed, fear and hatred”) of their own people through subjugation, oppression, murder — whatever it takes — of others, in this case of the Palestinians. The clickable article below highlights the lengths taken by the state of Israel to obfuscate this reality.

And of course Israel carries on such espionage and worse worldwide. As with the United States, “human rights” only extends to Israelis committed to and beneficiaries of Empire; just as “American Exceptionalism” means in reality brutal and lawless pursuit of Empire.

I am anti-United States Imperialism and against Israeli Imperialism, not anti-American or anti-Semitic.[ref number =”2″]See Sheldon Richman‘s “Anti-Israelism and Anti-Semitism: the Invidious Conflation“.))

At the end of Kleinfeld’s time at TIP, his boss there, Eric Gallagher, was so happy with his performance that he wanted to hire “Tony” on a permanent basis: “I would love it if you came to work for me. I need someone who’s a team player, hardworking, excited, passionate, curious, well-rounded, well-spoken, well-read. You’re all of those things.” Kleinfeld turned down the job. His qualifications were genuine, but he was of course an undercover reporter, sent by Al Jazeera to investigate the pro-Israel lobby. He filmed conversations using a hidden camera and later, as part of an Al Jazeera investigations team led by executive producer Phil Rees, put together a spectacular documentary. There was all the more excitement over its impending broadcast, because a 2017 Al Jazeera report on the pro-Israel lobby in the UK had revealed Israel’s interference in Britain’s internal affairs, and its attempts to bring down the deputy foreign secretary, Alan Duncan, whom it considered too pro-Palestinian. This had led to the Israeli ambassador in London making a public apology and a high-ranking diplomat being recalled to Tel Aviv.

The documentary was expected to be a media sensation, bringing outraged denials and intense controversy. But then the broadcast was postponed, with no official explanation. Eventually, articles in the US Jewish media revealed that it would never be shown. Clayton Swisher, Al Jazeera’s director of investigative journalism, expressed regret at the decision in a published article, and announced he was taking sabbatical leave. The documentary had been sacrificed to the fierce battle between Qatar on one side and Saudi Arabia and the United Arab Emirates (UAE) on the other for US support in the feud that began in June 2017. What better way to do this than by winning the favour of the pro-Israel lobby, known for its influence on US policy in the Middle East?

BDS [Boycott, Divestment, and Sanctions], launched in 2005, aims to use the nonviolent methods that proved effective in South Africa under apartheid. It is growing in popularity on US campuses, but David Brog, director of strategic affairs of Christians United for Israel and executive director of the Maccabee Task Force, a group fighting against BDS, questioned whether it is really a cause for alarm. He said: “Israel’s booming. It’s the start-up nation. More venture capital is going into Israel today than at any other time in history. So why don’t we just calm down, realise that BDS is worthless, it’s losing, and ignore it?… I don’t think BDS was ever supposed to be about getting colleges to take their money out of Israel. So if we focus on the dollars we can feel really good about ourselves. If we focus on the fact that an effort is being made to distance us, those who love Israel, from the rising generation, I think we need to worry. When you get to millennials and students, it’s a bad situation. And it’s getting to the point now where the majority is more favorable towards the Palestinians than the Israelis.” Jacob Baime, executive director of the Israel on Campus Coalition, a group of organizations that fights BDS in universities, is also worried: “The one thing every member of Congress and president and ambassador and newspaper editors has in common is, by and large, they spent a little bit of time on campus and probably those were formative years.”

There’s another worry for the lobby: Support for Israel has traditionally transcended the Republican-Democrat divide, and a few months before the end of his presidency, Barack Obama unconditionally approved $38 billion of aid to Israel over 10 years, though his relations with Netanyahu were terrible. But the political landscape is changing, and the lobby’s unconditional support for Trump is narrowing its base to the Republican Party and the evangelical right.

“If you’re a racist, the world should know”

One of the groups most feared by Palestinian-rights activists is Canary Mission[ 2 ], whose funding, members, and methods are shrouded in secrecy. A journalist with close links to the lobby said: “People who hate it, the people who are being targeted by it, call it a blacklist. You have names here that show up on this database. Students and professors, faculty, speakers, organizations that have ties to terrorism, outright ties to terrorism, or terrorists who have called for the destruction of the Jewish state.” Canary Mission’s website describes its aim as being to “ensure that today’s radicals are not tomorrow’s employees.” Above the biography of each victim is the slogan, “If you’re a racist, the world should know.”

Kleinfeld managed to talk to Canary Mission’s founder and financial backer, Adam Milstein, chairman of the Israeli-American Council (IAC). Milstein was jailed briefly for tax fraud in 2009, but that didn’t prevent him from carrying on his activities from prison. He explained his philosophy to Kleinfeld: “First of all, investigate who they [the pro-Palestine activists] are. What’s their agenda? They’re picking on the Jews because it’s easy, because it’s popular. We need to expose what they really are. And we need to expose the fact that they are anti everything we believe in. And we need to put them on the run. We’re doing it by exposing who they are, what they are, the fact that they are racist, the fact that they are bigots, [that] they’re anti-democracy.”

Students recounted in the documentary exactly what they faced. Summer Awad, who took part in a campaign for Palestinian rights in Knoxville, Tennessee, was harassed on Twitter, and information about her, some of it dating back a decade, was posted online: “They are digging and digging. Somebody contacted my employer and asked for me to be fired. If they continue to employ me they will be denounced as anti-Semitic.” Denunciation can end careers or make it hard for students to find a job after graduation. To get their names off the blacklist, some victims write messages of “repentance,” which Canary Mission posts on its site. These anonymous confessions, whose writers explain that they were “deceived,” are much like those of suspected communist sympathizers under McCarthyism in the United States in the 1950s, or victims of authoritarian regimes today. Baime said: “It’s psychological warfare. It drives them crazy. They either shut down, or they spend time investigating [the accusations against them] instead of attacking Israel. It’s extremely effective.” Another person told Kleinfeld: “I think anti-Semitism as a smear is not what it used to be.”

These campaigns, based on personal information gathered about US citizens, would not be possible without the resources of Israel’s Ministry of Strategic Affairs. Its director general, Sima Vaknin-Gil, said in a talk at the IAC annual conference shown in the documentary: “The fact that the Israeli government decided to be a key player means a lot because we can bring things that NGOs or civilian entities involved in this thing [don’t have].… We’ve got the budget. We can bring things to the table that are quite different. Everybody out there who has anything to do with BDS should ask himself twice: Should I be on this side or do I want to be on the other side?”

Everything seems to be going well for Israel, but its American supporters, despite their extensive resources, are nervous. The future seems dark to them, and even those most likely to support them are wavering. The documentary shows Vaknin-Gil admitting in a Knesset hearing: “Today we [have] lost the second generation of Jews, which are the millennial generation of Jews. I hear this from their parents, who come and explain to me what a hard time they’re having with their kids at Friday dinners. They don’t recognize the state of Israel and don’t see us as an entity to be admired.”