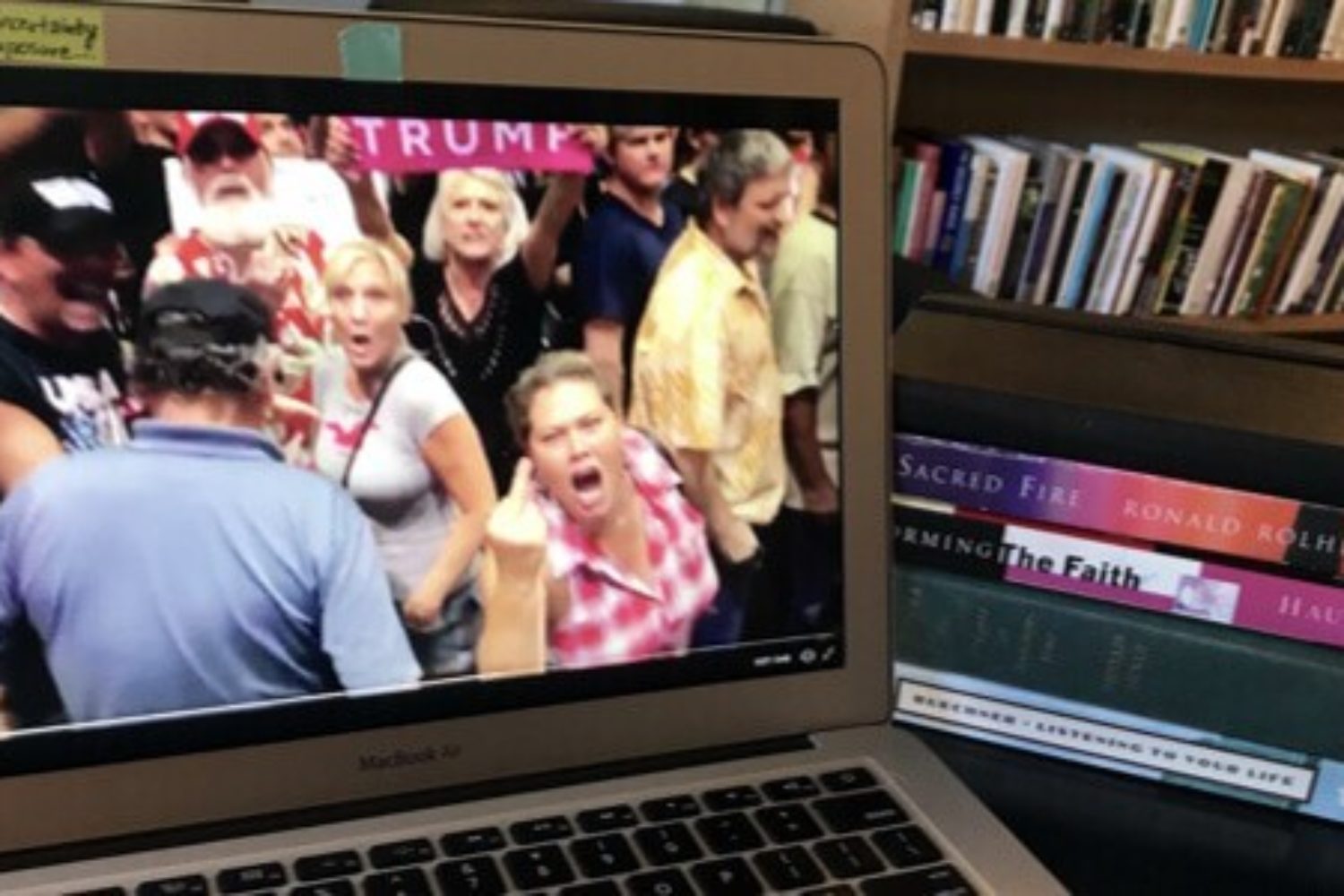 WN: In the article highlighted below, we are told — again by this author — that America has a wisdom problem. I have no doubt that he is right.

What must be asserted however much more so is that America has an Evil Empire problem. When an Empire models brutality, greed, fear etc., to the wider world, something that has been inter-generational since its founding, and elects in 2016 one of the most vile and divisive of all previous Presidents, such evil invariably is acted out in its people. (What the author of the highlighted article says of Trump and his stalwart followers, in particular by implication of his fellow white Evangelicals, is right on; and likewise his long citation of a passage from Ronald Rolheiser’s Sacred Fire1, is so important for all of us!)

The woman in the photo above is America to every people worldwide it dominates to extract maximum wealth. Such evil is unsustainable. Such evil is contrary to the “arc of justice” the universe is bent towards — and away from America’s being “the most violent nation on earth” (both quotes from Martin Luther King, Jr.) — and ultimately will experience in Kingdom Come.

Maranatha! Even so come, Lord Jesus!

Love him or hate him, Jim Acosta is just a man trying to do an incredibly important job in our society. He’s right, the press is not the enemy. Nobody deserves to be treated that way.

This hateful display has been prompted by the president’s attacks on “fake news.” He calls the press “the enemy of the people.” Last week in Kansas City where I live, the sitting U.S. president borrowed a line from George Orwell’s 1984, saying: “Stick with us. Don’t believe the crap you see from these people, the fake news. … What you’re seeing and what you’re reading is not what’s happening.” Orwell’s line is pretty close: “The party told you to reject the evidence of your eyes and ears.”

I confess that I honestly do not understand how people of good will and strong character–especially Christians–can continue to support a man like Donald Trump. I don’t know of any ideology or political loyalty that is worth giving one’s fealty to a person so persistently cruel, so obviously devoid of goodness and light.

I’ve said it before, and I’ll say it again. America has a wisdom problem.  In the absence of genuine wisdom, the job of the leader is to provide that wisdom for the people, not to stoke and exploit their ignorance. We are going to continue to disintegrate as a society as long as our president is committed to chaos and division.

We cannot come back together by following this president. That’s not the direction he is going.

As long as Donald Trump continues to whip his supporters up into a hate-filled frenzy attacking journalists and Democrats as though they are criminals, he is making our problems worse.

When I answer my critics back, I hope I always try to do the written version of what Rolheiser is describing. I reply with some version of: You and I see things very differently, and that’s okay. But I will never hate or despise you. Someday we are going to have to come back together as friends, and in the meantime, while we work things out as a society and try to find our way forward, you can count on me to be thinking good thoughts about you. I will contend for what I believe is right, and I will do my best to believe that you are sincere and contending for what you believe is right as well, so that when this is all over I can say I’ve been a faithful friend to you.

I confess that I may not always mean every word as I type them. I am often frustrated and angry when someone calls me a coward or a vile idiot. Nevertheless, I am always trying to mean it, wanting and hoping to give in to the better angels of my nature. I am always striving to live up to my highest ideals, and to embody the life of Jesus in my own life. I am always hoping to confess with integrity that I do not give my allegiance to any political party, but only to the church, to my baptismal identity, and to my brothers and sisters in this life.