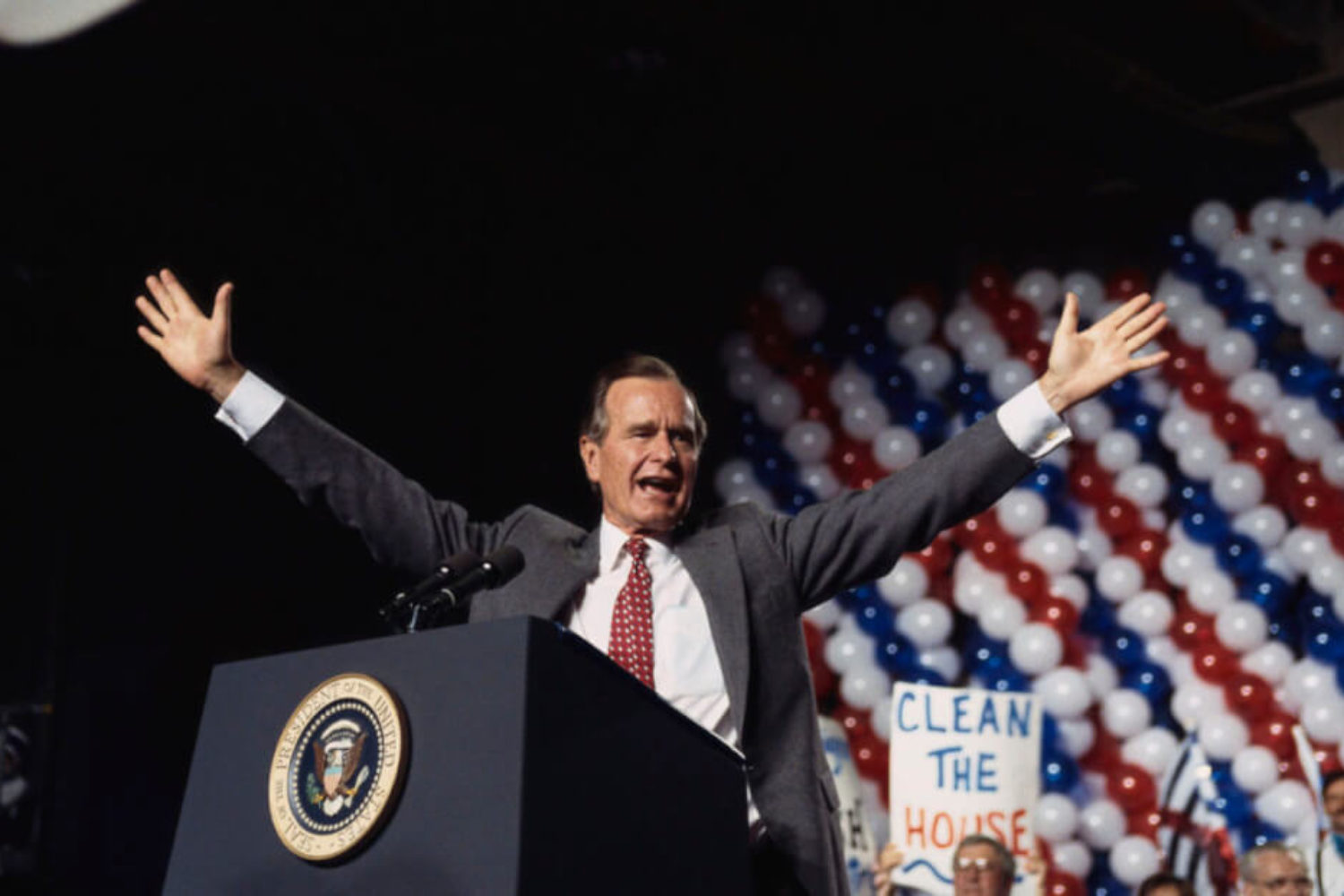 photo above: President George H.W. Bush speaks during his unsuccessful bid for re-election for the presidency, October 29, 1992.Wally McNamee / Corbis via Getty Images

WN: My commentary from the previous post is fitting again:

Of course any lineup of contemporary former Presidents is seen to have have acted as H. W. did. As have all previous Presidents… (White) America has been a vicious pillaging people from before its brutal Revolution on; from before Manifest Destiny and the Great Expansion Westward. As Prof Kirk of C.S. Lewis note might say: “What do they teach those children about their history in schools anyway?!”

America: bastion of democracy; upholder of human rights; refuge for the downtrodden? Its historical reality since the Puritans has been the very inversion of all that makes for geopolitical decency on the Planet. Welcome to the real (American) world of largely unabated rapacious greed; marauding expansionism; brutal domination. Sadly enough too, “Prof Kirk” from the outset was largely co-opted into service of this implacable behemoth.

Trump the worst of the worst? Possibly. Symptom and exemplar of America’s national trajectory since before inception as peerless “axis of evil” — in quest of apotheotic ultimacy of same — no doubt. “Make America (as Ever) Evil Again” is his slogan reified in ubiquitous domestic and international impact.

Bush Sr.’s involvement with and subsequent cover-up of the Iran-Contra scandal could give Donald Trump lessons on how to obstruct justice.

He became a member of the #MeToo fraternity of scumbags after eight women claimed he groped them during picture-taking sessions.

He lied about the threat Iraq posed in order to justify the Gulf War a full 13 years before lying about Iraq and war became the hip family thing to do.

US forces deliberately bombed water-treatment facilities during that conflict, actions that were nothing more or less than biological warfare waged upon a civilian populace, also known as “war crimes.”

Iraq still glows in the dark from the depleted uranium left behind by all the exploded US ordnance during that war.

He tripled down on the Nixon/Reagan “Southern Strategy” during his 1988 presidential campaign by turning Atwater loose with the “Willie Horton ad” that set the low bar for gutter racist politics in the US for a generation.

That institutional bigotry also fed Bush’s vicious ramp-up of the so-called “war on drugs,” which even many Republicans now call a giant racist failure.

He fathered George W. Bush and Jeb Bush, raised them to be the men they became, and while the sins of a father should not necessarily reflect upon the sons, the sins of the sons — W. in particular — certainly cast a grim light upon the father. Something in that household made those two boys into the malevolent fools they grew into, and it wasn’t the fishing on Cape Porpoise Harbor.

The benign, benevolent, grandfatherly figure we’ve been seeing on TV was also, thanks to W., one of the more shameless war profiteers of the 21st century. As a board member and unofficial “ambassador” of the private equity Carlyle Group, Bush Sr. made many millions from that company’s weapons sales thanks to his son’s ongoing Iraq catastrophe. “A tidy gift,” I wrote some 15 years ago, “from son to father.”