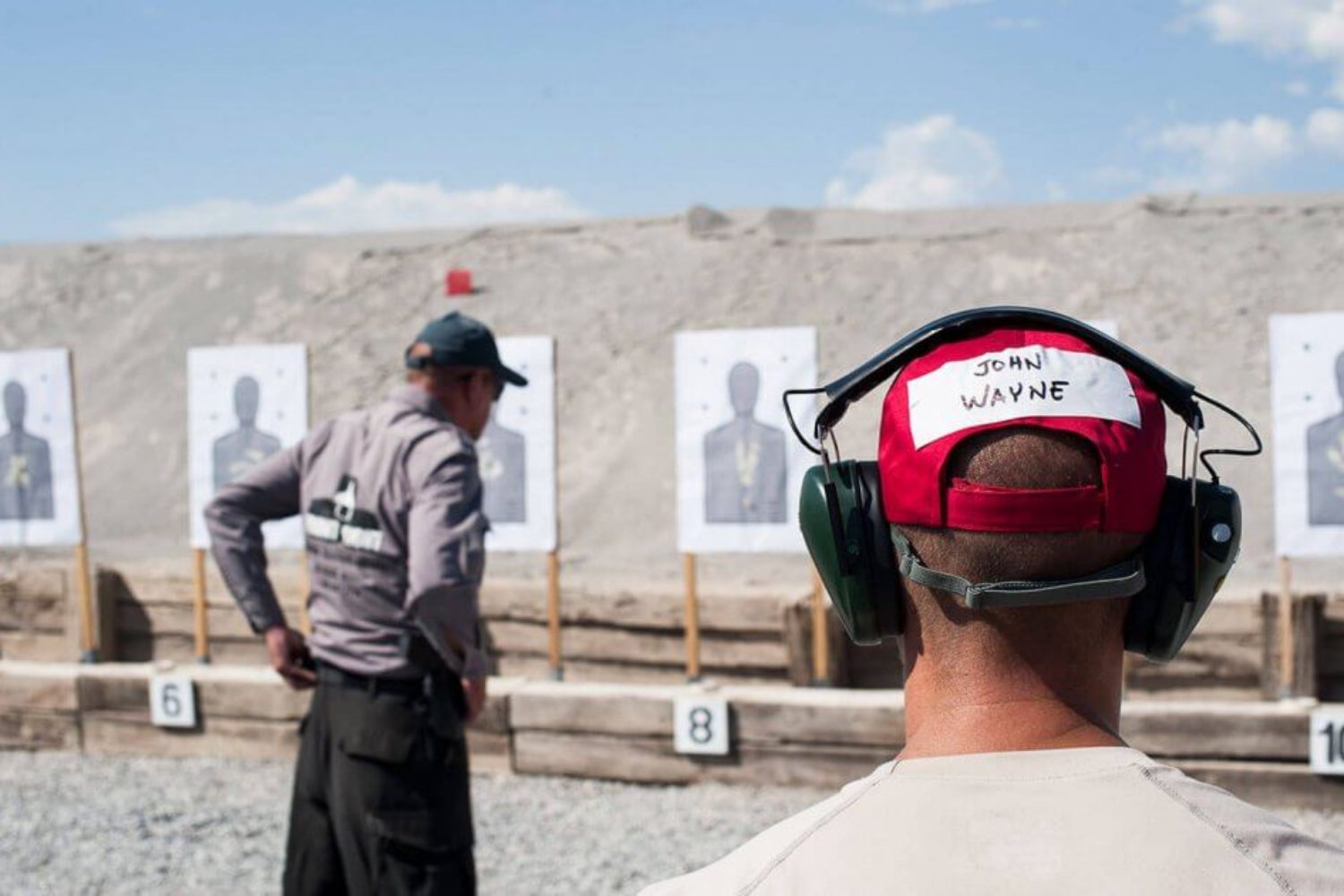 photo above: “John Wayne,” an active- duty serviceman, watches his trainer demonstrate a “controlled pair”—two shots to the center of a target. (Evan Simko-Bednarski)

WN: John Lott published a book that has gone through two reissues, most recently in 2010: More Guns, Less Crime: Understanding Crime and Gun Control Laws. The title is the thesis. The Wikipedia article about Lott’s claims cites the following report:

Partially in response to Lott’s book, a sixteen-member panel of the United States National Research Council was convened to address the issue of whether right-to-carry laws influenced crime rate. In 2004 they issued the report “Firearms and Violence: A Critical Review” which examined Lott’s statistical methods in detail, including computation of the statistical uncertainties involved, and wrote

The committee found that answers to some of the most pressing questions cannot be addressed with existing data and research methods, however well designed. Indeed, the committee was unable to find any of the laws that it examined had any effect on crime or suicide rates. In the case of right-to-carry laws, despite a large body of research, the committee found no credible evidence that the passage of right-to-carry laws decreases or increases violent crime, and there is almost no empirical evidence that the more than 80 prevention programs focused on gun-related violence have had any effect on children’s behavior, knowledge, attitudes, or beliefs about firearms. The committee found that the data available on these questions are too weak to support unambiguous conclusions or strong policy statements.[3]

The council determined that Lott’s data-sets can be subject to manipulation given a number of factors, so that different studies produce different results. “While the trend models show a reduction in the crime growth rate following the adoption of right-to-carry laws, these trend reductions occur long after law adoption, casting serious doubt on the proposition that the trend models estimated in the literature reflect effects of the law change.”[3]

When I read the article noted below, what stands out about American gun culture is fear – the possession of guns is based upon fear.There is also the issue of “weapons bias”: “Research psychologists like B. Keith Payne have identified a cognitive ‘weapons bias,’ whereby individuals regularly misidentify nonthreatening objects as guns when they’re held by people with darker skin. While police departments increasingly acknowledge the role of weapons bias in their training, there’s no reason to think that armed civilians are immune from it… Carlson voices this very concern: ‘The avoidance of race and other stereotypes [in weapons training] about criminals may actually increase the likelihood that individuals make split-second decisions based on subconscious prejudicial beliefs rather than reasonable evaluations of a threat.’ ” This phenomenon is heightened in American war zones.

Then for Christians, simply put: Scripture posits the opposite of fear as love (I John 4). Whatever else, a gun/fear culture such as so rampant in the United States is diametrically opposite to a culture of neighbourly love. With such a gun culture of fear, combined with greed and hatred of the other (as explained in An American Genocide – the trinity of evil, noted in my post here), it is no surprise that the United States throughout its history has been incredibly violent towards the other, domestically, and around the world.

An excerpt from the article:

I draw and feel myself going somewhere, the mechanical unthinking somewhere I went after Carol yelled behind me earlier. I aim at the hostage taker on the left and squeeze off three rounds. Each lands true, right where the eye socket would be, as far away from the hostage as I can get while still landing in the head box. I turn my attention to the other bad guy and put one in his eye, too.

And then, suddenly, I snap out of it and realize what’s happening. This is a scripted, psychologically engineered “come to Jesus” moment. Between the heat, the exhaustion, and the constant invocation of horrifying scenes, we may as well be at the apogee of a revival or vision quest, the desert one giant sweltering tent or sweat lodge. It’s ingenious, but contrived. My next shot grazes the hostage’s ear, and my last goes totally wide. “It’s OK, she’ll be fine!” one of the trainers says.

We’re supposed to take the targets home, as objects of contemplation, and show them to our loved ones. “Until next time,” the Front Sight instructors bid us farewell, “stay in Condition Yellow [constant readiness to  use a gun to shoot to kill]!”