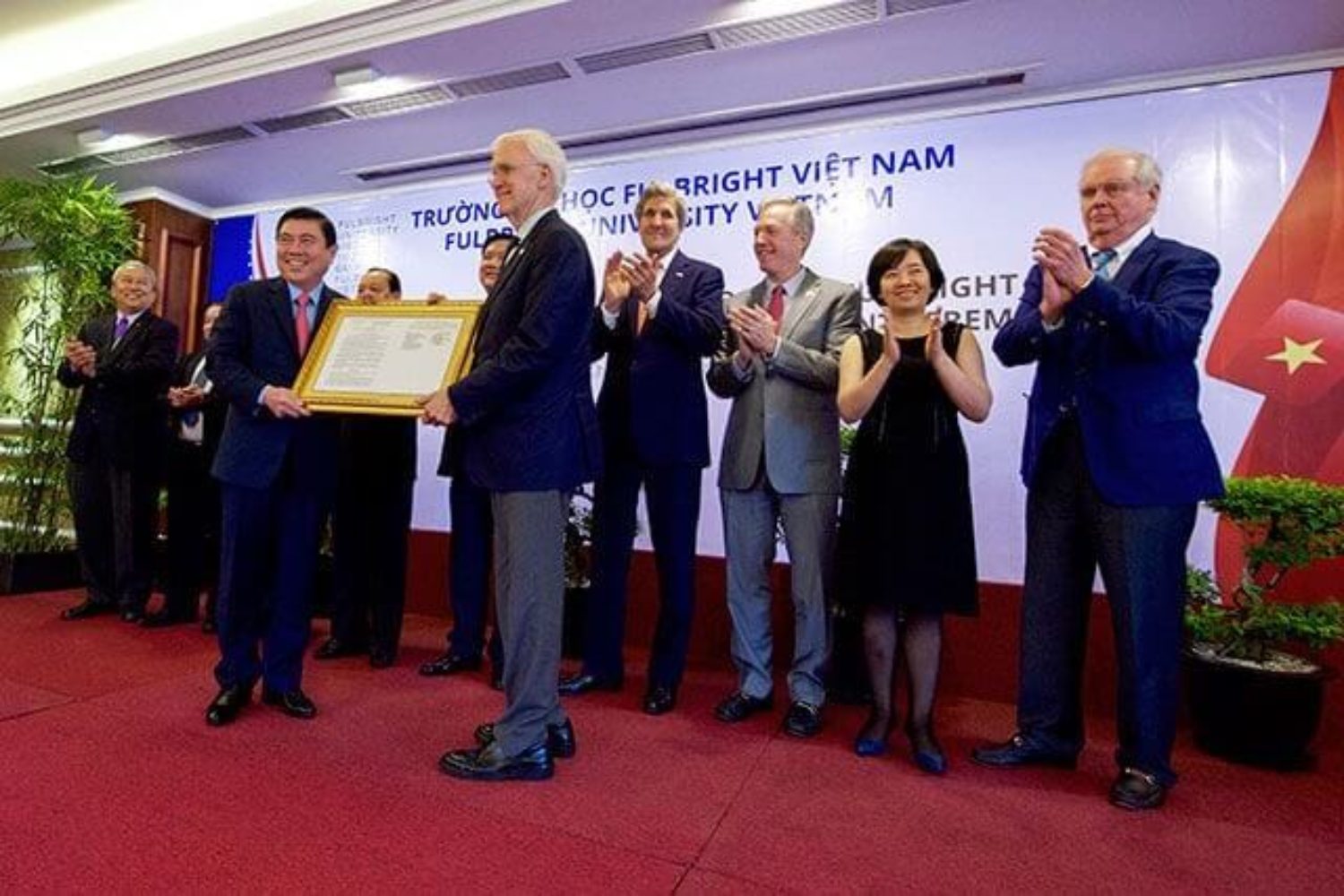 photo above: Former Sen. Bob Kerrey, board chairman of the new Fulbright University Vietnam, is presented with the school’s license during a ceremony in Ho Chi Minh City, Vietnam, May 25, 2016. The appointment of Kerrey to lead the university has set off a sharp debate among Vietnamese over whether he should be disqualified because of his part in killing women and children as a Navy SEAL during the Vietnam War. (Photo: United States State Department via The New York Times)

[WN] They called out in a loud voice, “How long, Sovereign Lord, holy and true, until you judge the inhabitants of the [United States] and avenge [their vastly innumerable victims’] blood?”  (Revelation 6:10) This cry applies to all victims of Empire throughout history. In the case of the United States Empire, their massive slaughter of innocents worldwide, their absolute refusal to acknowledge any of the gargantuan numbers of their victims, cries out to heaven for justice. Given that the two dominant religious groups in the US are Catholics and Evangelicals, both of whom have blessed overwhelmingly the slaughtering for generations (see just for instance their past history, apart from support of such to this day, here, and here) of countless victims, there is an overwhelming accounting with their (so-claimed, though abjectly suspect claim) “Sovereign Lord”.

A longstanding American friend, an otherwise highly gifted tenured theologian, has asked me why in some of what I write, I express anger about US atrocities worldwide. I ask that person in response: “And you feel no anger?”

You, the reader, may be the judge…

The announcement of Kerrey’s appointment to Fulbright University [in Vietnam] has had three major effects: (1) it reopened the wounds of the war and bitter memories of staggering ecological and physical devastation and human loss; (2) it awakened memories of Kerrey’s 2001 admission of the atrocity in Thanh Phong and of the many US war crimes that were never reported officially or in the media, never admitted, and for which no one was ever charged or convicted; and (3) it ignited a controversy among Vietnamese people about Kerrey’s appointment.

Viet Thanh Nguyen, the Vietnamese-American author of the Pulitzer Prize-winning novel, The Sympathizer, disagrees with those who favor Kerrey’s appointment “as an act of reconciliation.” Nguyen criticizes the predominant view in the US that the war was “an American tragedy,” and disagrees with those who claim Kerrey is also a victim “of an unjust war and disastrous leadership.” It “seems ironic, if not outright ludicrous,” when one compares Kerrey’s “prominence to the obscurity in which the survivors of the attack he led and the relatives of those killed now live.” In the end, Kerrey’s life and career “have barely been impeded, except for any personal regrets.”

What lessons can we draw from Kerrey’s recent appointment? It was a tactless and insensitive affront to the people of Vietnam. Can we imagine a German army officer whose unit murdered unarmed Jewish civilians in a Polish village, decades later being chosen the president of a university in Germany, and eventually being named the head of Tel Aviv University? Some Vietnamese people accept the Kerrey appointment on the basis of reconciliation and forgiveness. But reconciliation and forgiveness do not require that someone be appointed to a prominent position after he committed war crimes, lied about it for 32 years, and only confessed when the truth was about to be revealed to the world.

This appointment indicates that the US government still does not understand the enormity of its crimes against the Vietnamese people. Many Americans still deny that the US committed war crimes and Washington will not allow its responsible civilian and military officials — and lower-level soldiers — to be tried before international tribunals. But Washington asserts that those from other countries be indicted for war crimes and demands that international courts punish the offenders. On this issue of war crimes, historian Gabriel Kolko, author of one of the outstanding works on the Vietnam conflict, Anatomy of a War, addresses the My Lai massacre in a manner that goes to the heart of what happened in Thanh Phong: It is “the foot soldier’s direct expression of the… fire and terror that his superiors in Washington devise and command from behind desks…. The real war criminals in history never fire guns [and] never suffer discomfort.”

Like Loading...
Board chair for US private university in Vietnam, Bob Kerrey mass murderer in Vietnam, justice cries out, US war crimes and atrocities