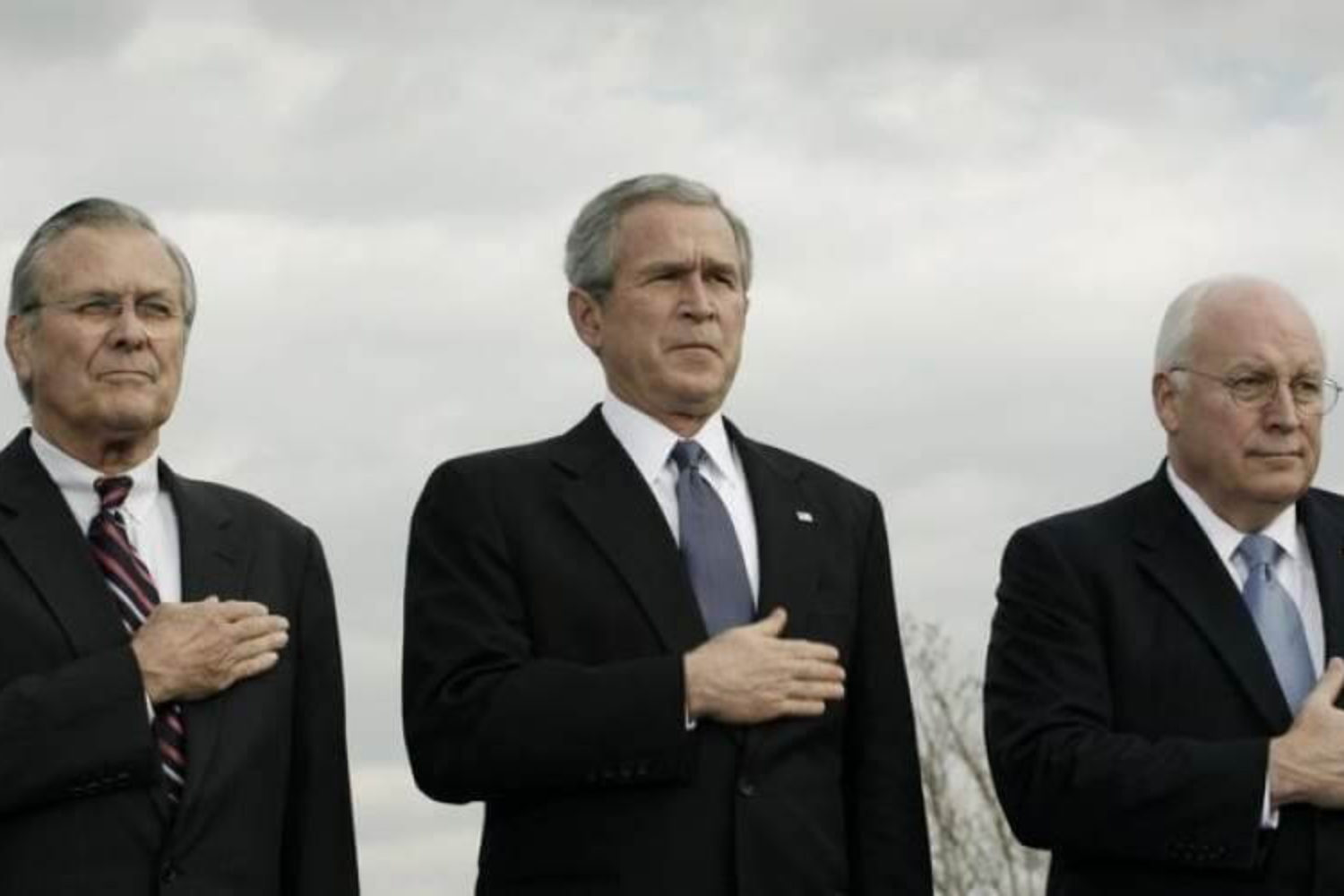 Why Did Bush Go to War in Iraq? The Answer Is More Sinister Than You Think

No, it wasn’t because of WMDs, democracy or Iraqi oil.

Published on Wednesday, March 20, 2019
by Ahsan I Butt
Al-Jazeera English

photo above: (From left) Former Defense Secretary Donald Rumsfeld, President George W. Bush, and Vice President Dick Cheney. “My investigation into the causes of the war,” writes Professor Butt, “finds that it had little to do with fear of WMDs – or other purported goals, such as a desire to “spread democracy” or satisfy the oil or Israel lobbies. Rather, the Bush administration invaded Iraq for its demonstration effect.”

WN: As a matter of fact, the question in the headline is not “more sinister” than I thought. The website you are on attests to the horror of American Empire in myriad ways. It is of a piece with believing in American exceptionalism, such that every conceivable means however rapacious and brutal is routinely employed to maintain world hegemony.

Another way of putting it is: the American government is the greatest criminal Mob organization in the world, and utterly ruthless in stooping to the most lethal, violent, merciless means it deems necessary to protect “its” territory.

It just so happens that the United States believes its territory is the entire Planet, and woebetide any people, country or entity in its way! They don’t have to conquer other countries as in past colonialism. They work insidiously through other régimes or surreptitiously in most countries on earth like any two-bit gangster Mob to maintain full spectrum dominance.

Their supreme value is unbridled Greed. Their MO is exercising global domination to assuage that voracious cupidity. Democracy? Human Rights? Freedom? Peace? All putrid covers as two-faced as that of any any low-life con. Their mercenary avarice knows no bounds. Their “christian” civil religion has taken “Thou shalt not covet”, inverted it, and elevated Covetousness to an obscene Ultimate Art Form…

No surprise at all therefore about how “sinister” Bush’s motives were. The Thesaurus supplies a few more choice adjectives that fit Bush and the other Mob Bosses then, and a vast array of others before and since:..

As one reads the article highlighted below, one feels profoundly "had". Welcome to the Real World of American Empire hegemony.1

Sixteen years after the United States invaded Iraq and left a trail of destruction and chaos in the country and the region, one aspect of the war remains criminally underexamined: why was it fought in the first place? What did the Bush administration hope to get out of the war?

The official, and widely-accepted, story remains that Washington was motivated by Saddam Hussein's weapons of mass destruction (WMD) programme. His nuclear capabilities, especially, were deemed sufficiently alarming to incite the war. As then US Secretary of State Condoleezza Rice said, "We do not want the smoking gun to be a mushroom cloud."

Despite Saddam not having an active WMD programme, this explanation has found support among some International Relations scholars, who say that while the Bush administration was wrong about Saddam's WMD capabilities, it was sincerely wrong. Intelligence is a complicated, murky enterprise, the argument goes, and given the foreboding shadow of the 9/11 attacks, the US government reasonably, if tragically, misread the evidence on the dangers Saddam posed.

There is a major problem with this thesis: there is no evidence for it, beyond the words of the Bush officials themselves. And since we know the administration was engaged in a widespread campaign of deception and propaganda in the run-up to the Iraq war, there is little reason to believe them.

Ledeen Doctrine: "Every ten years or so, the United States needs to pick up some small crappy little country and throw it against the wall, just to show the world we mean business."

My investigation into the causes of the war finds that it had little to do with fear of WMDs - or other purported goals, such as a desire to "spread democracy" or satisfy the oil or Israel lobbies. Rather, the Bush administration invaded Iraq for its demonstration effect.

A quick and decisive victory in the heart of the Arab world would send a message to all countries, especially to recalcitrant regimes such as Syria, Libya, Iran, or North Korea, that American hegemony was here to stay. Put simply, the Iraq war was motivated by a desire to (re)establish American standing as the world's leading power.

From the article: As prison bullies know, a fearsome reputation is not acquired by beating up the weakest in the yard. Or as Rumsfeld put it on the evening of 9/11, "We need to bomb something else to prove that we're, you know, big and strong and not going to be pushed around by these kinds of attacks."

In a 2002 column, Jonah Goldberg coined the "Ledeen Doctrine", named after neoconservative historian Michael Ledeen. The "doctrine" states: "Every ten years or so, the United States needs to pick up some small crappy little country and throw it against the wall, just to show the world we mean business."

It may be discomfiting to Americans to say nothing of millions of Iraqis that the Bush administration spent their blood and treasure for a war inspired by the Ledeen Doctrine. Did the US really start a war - one that cost trillions of dollars, killed hundreds of thousands of Iraqis, destabilised the region, and helped create the Islamic State of Iraq and the Levant (ISIL) - just to prove a point?

Like Loading...
grotesque American Empire, Why Did Bush Go to War in Iraq? The Answer Is More Sinister Than You Think