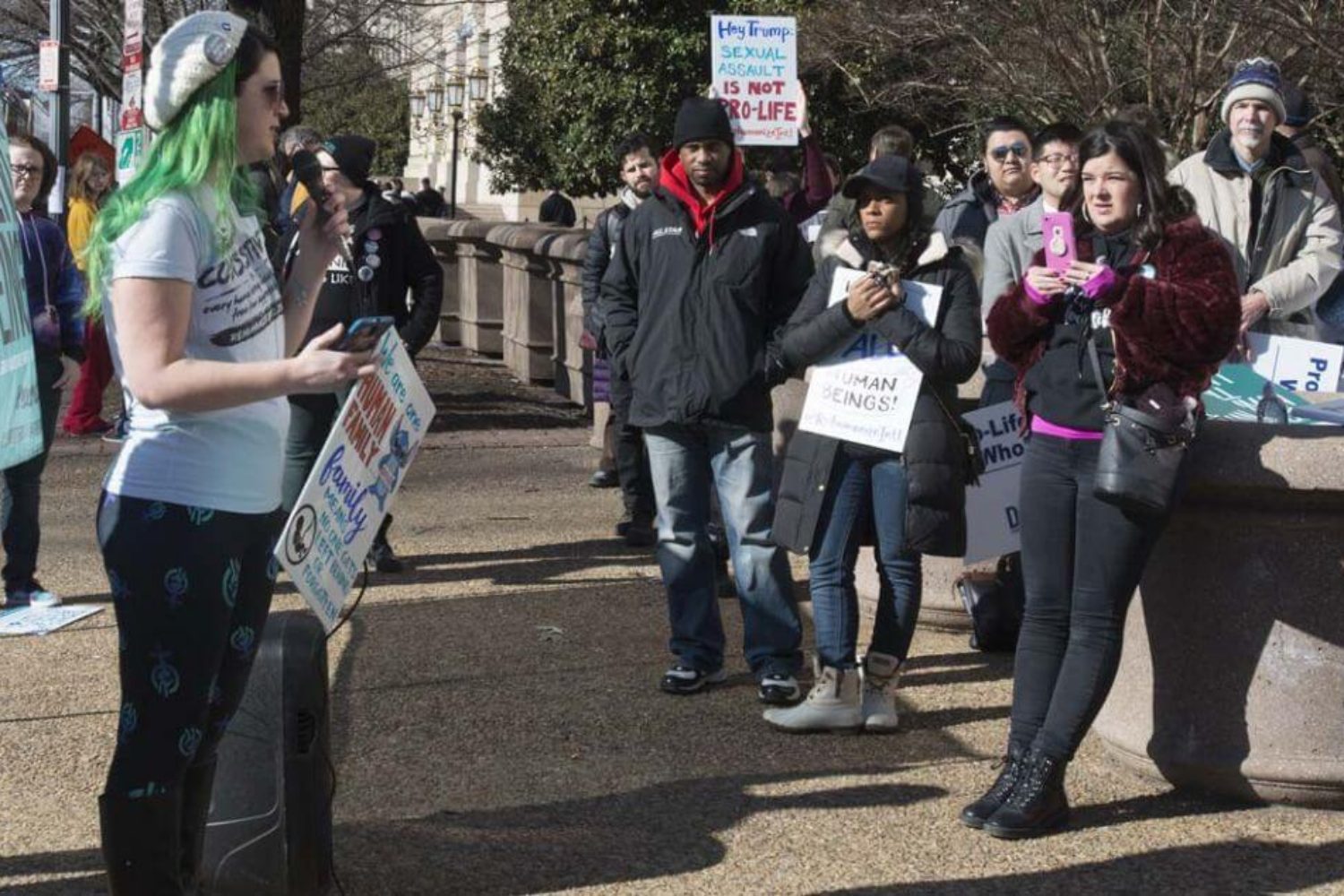 New Pro-Life Movement: ‘No’ to Trump; ‘yes’ to atheists

photo above: Aimee Murphy, executive director of Rehumanize International, tells a group of pro-life activists at the 2018 March for Life Jan. 19 in Washington that it’s important for people to know that being pro-life means being against abortion, the death penalty, war, and discrimination as well as supportive of immigrants. (CNS/Carson King)

WN: This broad-based pro-life development, inclusive of non-Trumpers, atheists, and anti-death penalty activists, is hopeful. Now if anti-war (anti(unjust)-war does not cut it! – since entirely subjective) and anti-Empire activists also joined in…

That’s OK, you can still be pro-life, say activists warning that the movement against abortion has been captured by conservative culture warriors promoting adherence to Republican politics as a litmus test. That concern came into sharp focus in 2016.

“The election of [Donald] Trump was a line in the sand,” Rebecca Bratten Weiss, co-founder of the New Pro-Life Movement, told NCR.

Weiss, who lives near Steubenville, Ohio, says that it’s become harder for those opposed to abortion and Trump administration policies, such as the separation of children from their mothers at the Mexican border, to be allied with traditional pro-life groups, who have grown to accept the current administration in Washington with its promise to nominate judges who will overturn Roe v. Wade.

The New Pro-Life Movement manifesto declares that “all humans have an absolute, inherent right to life, and we believe this right spans from conception to natural death. This includes both the protection and the sustainment of life at all stages, and creates the foundation for our entire platform.”

We are completely, totally, and without reservation opposed to the act of abortion, or any action that directly and purposefully ends the life of a child in the womb. However, we believe the methods of the mainstream pro-life movement have largely failed to address the issue properly.

The New Pro-Life Movement also pledges support for women subject to sexual harassment, opposes the death penalty and argues that increased access to health care and social supports is the best way to discourage abortion and to promote human rights. It also calls for what it describes as sensible controls on gun violence.

Other pro-lifers are also wary of the Trump alliance. Katelyn Beaty, 34, who now works as a book editor, was for 10 years an editor at Christianity Today, the magazine founded by Billy Graham and considered a bellwether of the evangelical movement.

[The Evangelical magazine] Christianity Today entered the Trump fray back in the 2016 election with an editorial calling into question the then-candidate’s morality and view of women. Beaty graduated from Calvin College in Grand Rapids, Michigan, and formerly was part of a United Methodist congregation and now, residing in Brooklyn, New York, she attends an Episcopal church. Beaty said she has voted for both Republicans and Democrats.

But, she said, “I am very discouraged and disgusted by the example of what we have about Republican leadership in the country.”

She said there is a growing unease among younger evangelicals who have stopped attending churches which have become dominated by older, politically active Trump supporters.

“Trump has been an existential crisis,” she said.

At a December 2018 seminar at Jesuit-run Fordham University in New York, Beaty argued that pro-lifers need to embrace a consistent ethic of life — concerned with abortion as well as poverty and other concerns — if they are to develop credibility among millennials. Issues such as paid family leave are directly related to the concerns of hard-pressed women who feel that they are forced into abortions by dire economic circumstances, she said.

According to the Pew Research Center, American millennials, whom Pew defines those as “born between 1981 and 1996 (ages 22 to 37 in 2018)”, are more likely to support legal abortion than their elders. The center reported last year that 62 percent of millennials support keeping abortion legal in most cases, compared to 53 percent of baby boomers. A 2018 survey by Public Policy Research Institution indicated that only 44 percent of young people say that abortion is against their personal beliefs, compared to 60 percent of seniors.

That millennial view can be attributed to the clear alliance between churchgoing Christians and the pro-life movement, say critics of the movement. As millennials drop out of church participation, it is not surprising that they are increasingly tolerant of abortion, noted Herb Geraghty, director of communications for Rehumanize International, a Pittsburgh-based group with similar goals as the New Pro-Life Movement. It boasts over 7,000 Facebook page likes.

Geraghty, 22, and a University of Pittsburgh graduate, became active in the pro-life cause while in college, particularly after social media discussions about the Kermit Gosnell case, the Philadelphia doctor who was convicted of murder of infants born alive after abortion attempts. She spoke at the Fordham event about what makes her different from many of her pro-life colleagues. Not only is she liberal, a feminist and in her twenties, she is an atheist.

“I’ve had to sit through countless prayers and songs,” she told NCR about her participation in anti-abortion events, which are often dominated by evangelical Christians and Catholics.

For the pro-life movement to succeed, she said, it can convert everyone to conservative Christianity or, better yet, be welcoming to those with divergent views, including a growing younger population that no longer attends church. She said that while many younger Catholics no longer attend church, many still retain strong pro-life allegiances.

The National Right to Life Committee is a prime player in the annual March for Life held every January in Washington. Geraghty is a regular participant. Last year, her organization sponsored seminars with scientists and atheists who oppose abortion.

“We became an oasis of liberals and progressives among a sea of Make America Great Again hats and Trump supporters,” she said.

She plans to go back this year. If the movement against abortion is to become more inclusive, Geraghty said she, for one, needs to be there, in all her feminist and atheist glory.

“We need liberals and atheists. We’re more inclined to listen to people who are like us,” she said. “I need to be the one to make the event more inclusive.”

[Peter Feuerherd is a correspondent for NCR’s Field Hospital series on parish life and is a professor of journalism at St. John’s University, New York.]