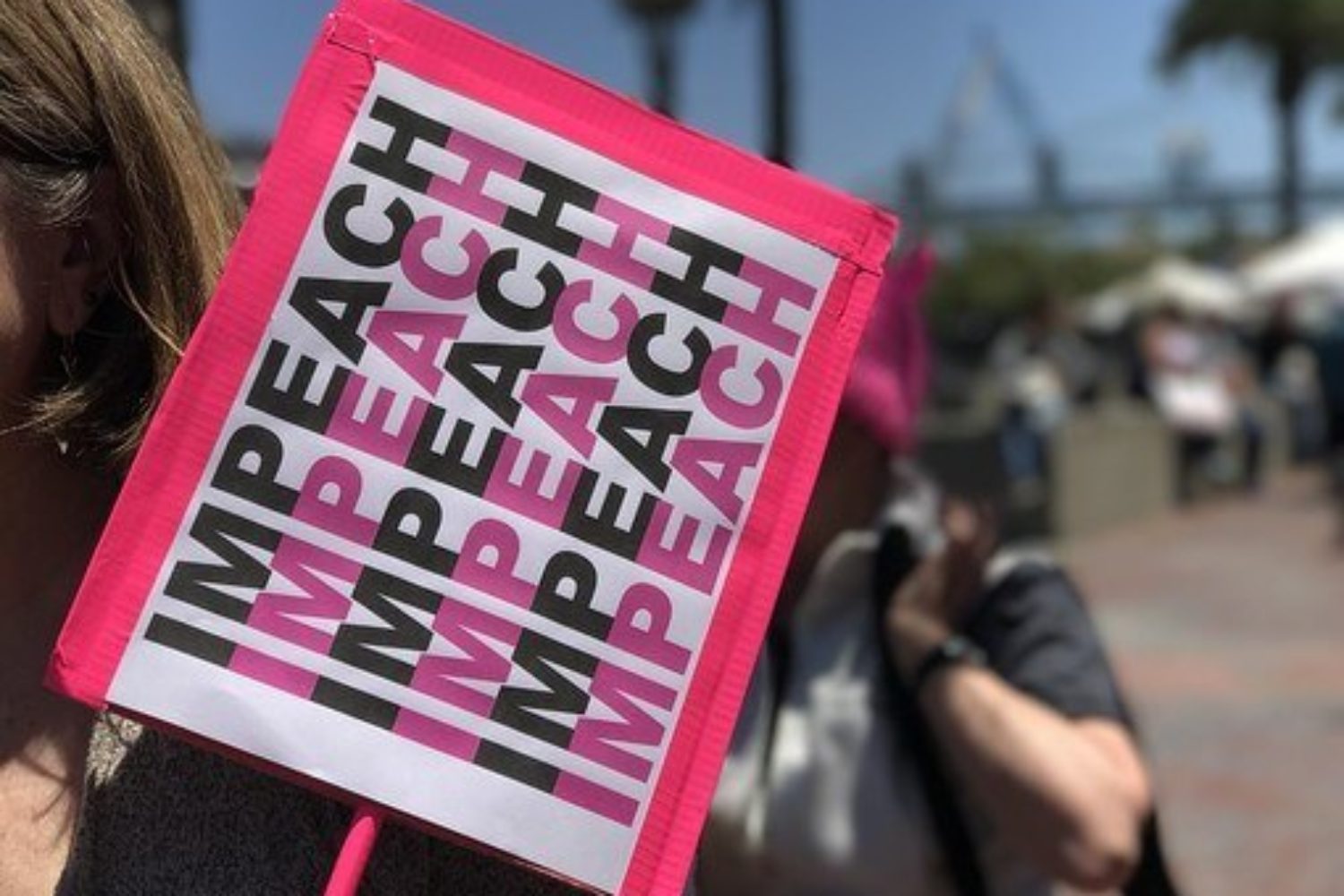 WN: There is always more going on geopolitically than meets the eye! This account is to be taken seriously.

For the first time in half a century, the political left in the U.S. is ascendant. Bernie Sanders is holding his own in the primaries. A group of well-considered programs to save the environment and provide good jobs and health care for all is gaining political traction. And the need is dire. The climate is warming, the seas are polluted and fished out and industrial agriculture threatens to end life on the planet. So, it’s time to change the subject?

Despite occasional warm gas passed in a leftish direction, establishment Democrats never had any intention of allowing a left political program to move forward. After four decades of asserting that they ‘believe’ climate science, the moment has arrived when the only political path forward is to take on their donors. Whatever your assessment of their motives, Nancy Pelosi and Chuck Schumer have no intention of doing this.

Following the electoral fiasco of 2016, the DNC defended itself in court by arguing that it has no obligation to provide a fair and open primary. In fact, the DNC ran a disinformation campaign against Bernie Sanders, used Superdelegates to overturn primary results, miscounted and misplaced ballots in crucial state primaries and violated its own charter in the allocation of funds to the candidates. In other words, they stole the primary election.

Whatever one thinks of Donald Trump and impeachment, it is the political establishment that is trying to bring him down. That the ‘whistleblower’ is a CIA officer who has since returned to active duty at the agency isn’t lost on Mr. Trump’s supporters. As much as the NPR tote bag set believes that it is the fount of wisdom and truth, they, along with the CIA, inflicted three years of the cynical farce of Russiagate on us and came up empty handed.

The CIA was the central protagonist in Russiagate. The origins of the New Cold War are found in Bill Clinton’s first term, when administration neo-cons looted, plundered and moved NATO against a prostrate Russia in contradiction to explicit guarantees not to do so made by the George H.W. Bush administration. Vladimir Putin’s apparent crime was to oust the Clintonites from Russia and restore Russian sovereignty.

If you get your news from NPR or the New York Times, Joe Biden’s threat to withhold $1 billion in U.S. aid to Ukraine until Ukrainian President, Petro Poroshenko, fired the prosecutor who was investigating Hunter Biden’s role at Burisma Holdings, was ‘looked into’ and no wrongdoing was found. Of course, the U.S.— the Obama administration, controlled the government that found no wrongdoing. Even still, the charge that the prosecutor, Viktor Shokin, was ‘corrupt’ was later retracted in private.

Rather than questioning why the Obama administration chose to overthrow the democratically elected President of Ukraine to install a puppet government hostile to Russia, American liberals simply accepted the Cold War mindset as it was handed to them. The official reason given, that Viktor Yanukovych was corrupt, was premised on the fact that he owned a hot tub. But how ‘corrupt’ was it for Mr. Obama to overthrow a democratically elected president in the first place?

In other words, if elections grant legitimacy to political leaders and a political order, how is it legitimate for a foreign power— in this case the U.S., with advance logistics provided by the CIA, to simply charge in and install a new government that answers to it, and not the electorate? In fact, with the CIA  planted in the White House, this seems remarkably like what the CIA is attempting to do against the Trump administration.

The CIA’s overthrow formula can be found in Stephen Kinzer’s All the Shah’s Men. Step 1: pose an unimaginably horrific boogeyman— let’s call it communism; and align the leader / government to be ousted with it. Step 2: overthrow said leader / government while marching paid operatives playing communists in front of the American press. Step 3: install a puppet government sympathetic to American interests, declare a victory for freedom, and call it a day.

For those who may have forgotten, the CIA’s ‘achievements’ include the U.S. war in Vietnam that left 4,000,000 Vietnamese dead, ‘Iran-Contra’ that had Oliver North running a global cocaine smuggling ring out of the basement of the White House to raise money to fund right-wing militias that terrorized Central America in the 1980’s, and the crack epidemic that devastated poor neighborhoods across the U.S. in the early 1990’s.

It’s hardly incidental that the former president of Poland sits on the Board of Burisma Holdings. On the day that impeachment was announced the current President of Poland was signing the papers to replace Russian with American-supplied gas to Poland. And Ukraine was inking a MoU (Memorandum of Understanding) to do the same— to cut Russia out of the oil and gas supply chain. The CIA’s Cofer Black joined the Board of Burisma in 2017.

So, along comes accidental President Donald Trump, who apparently has no idea who in the CIA is trying to screw him or why. In NPR / New York Times world, having a CIA officer planted in the White House is legitimate because, you know, Trump! However, they didn’t appear to agree when the CIA spied on the Senate Intelligence Committee and tried to blackmail it into ignoring reports of illegal torture.

Speaking of torture, Nancy Pelosi, who announced the impeachment investigation against Mr. Trump, was explicitly told of the CIA’s illegal torture regime in 2002. As a Senior Member of the House Intelligence Committee, Ms. Pelosi was herself legally culpable when she announced that impeachment of George W. Bush was ‘off the table.’ Had that impeachment proceeded, she could have been prosecuted and sent to prison.

So, Mr. Trump, politically astute domestically, but the intellectual equivalent of Joe Biden when it comes to technology, smells a rat in the CIA’s use of Ukraine as the launch site for the nefarious machinations of Russiagate. Apparently not knowing that Ukraine in toto is a CIA ‘asset,’ Trump stupidly asks the Ukrainian president for political dirt on Joe Biden. A quick bet is that Langley is the ‘whistleblower’s’ source for the complaint.

Given the CIA’s history of overthrowing democratically elected leaders and governments for the benefit of connected oligarchs, why is it a good idea to have the CIA within a million miles of domestic politics? Again, how would the CIA treat Bernie Sanders, or even liberal doyen Elizabeth Warren, if it is given the power to oust elected political leaders at will?

Nancy Pelosi, who saw how easily the ‘reality based community’ was rolled with Russiagate, apparently believes that she can thread the needle to simultaneously 1) end the momentum of left political ascendance, 2) bring the Democrats’ donor base back into the fold, 3) raise Joe Biden to the top of the 2020 heap, and 4) end talk of a Green New Deal, Medicare for All and a Job Guarantee. Early reports suggest the bourgeois left is on board with her program.

However, the other left, the part of the country that supports Donald Trump because they despise the manager class that has spent the last five decades dispossessing them for the benefit of the oligarchs, doesn’t get its news from NPR or the New York Times. Both of these sources heavily promoted both the George W. Bush administration’s WMD lies and charges of Russian interference in the 2016 election— Russiagate, which turned out to be wholly fraudulent.

Here is the problem: Bernie Sanders’ electoral chances and the entirety of the left political program require taking on the Democrat’s donor class— and the Republican’s. Mr. Sanders has made inroads by broadening the electorate and crossing the traditional left / right divide. This, plus Mr. Trump inserting himself into the CIA’s turf in Ukraine to bring Joe Biden down, explain the sudden establishment interest in impeachment.

Without impeachment, the primary process proceeds apace, and voters have a real choice for President for the first time in five decades. With it, the marketing divisions of blue v. red drive unaffiliated voters away while solidifying the lines of division along Party lines. The establishment goal is to crush the left and stop its momentum. Impeachment is the tool of convenience toward this end.

Let the electoral process play out.