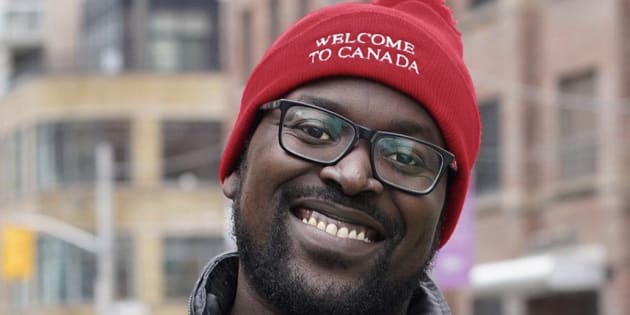 photo: Victor, who immigrated to Canada from Kampala, Uganda, is proud to “unravel hate,” and call Canada home.

WN: The article highlighted below is a wonderful made-in-Canada response to the vituperative hatred of — on the MAGA issue at least — Trump’s Deplorables. Sadly, a close relative is amongst that TD Hate Group. And a few others close… Have they never read their New Testaments?… Jesus?…

The video embedded here, says it all:

One can only hope and pray that such profoundly ugly hate towards the “Other” will lose ground ever more in Canada. Politically, this means today minimally eschewing Conservatives at federal and provincial levels. Are Liberals at both levels any better? Sadly, not necessarily…

Lord, in your mercy…

We read at the end of the article:

The “Welcome to Canada” toques are being sold on Peace Collective’s website, and the original toque made with MAGA-hat threads is being auctioned online. Profits from the sale of all toques are being donated to WoodGreen Community Services, which helps refugees and immigrants settle into their new lives in Canada.