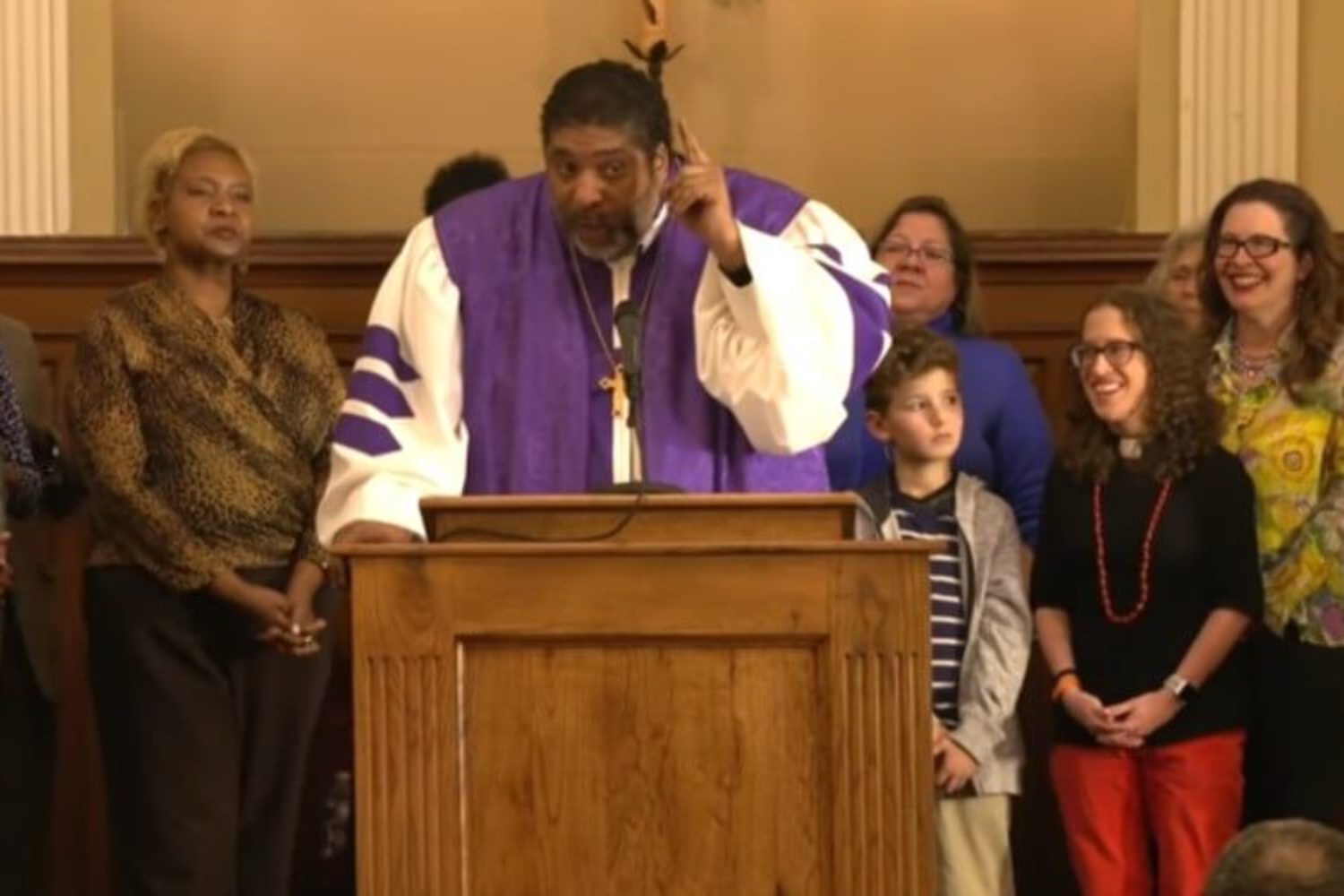 “To preach is to see the people who are crying out and the systems that are crushing them. It is to say, ‘Somebody’s hurting my people and it’s gone on far too long and we won’t be quiet and inactive anymore.’ It is to do something about it. It is to join with others who are doing something about it.”

photo above: “When a call goes out that unites people across the lines of race and class and creed and sexuality—now that’s preaching,” says Rev. Dr. William Barber II in his sermon on Martin Luther King Jr. Day. (Photo: Screenshot/Repairers of the Breach)

WN: The video below is powerful!

Then after watching the video, please click on “On MLK Day, the need for a ‘deeply moral argument’ about American injustice“, a great interview with Dr. Barber. He says in it (full text is in the article):

We are saying there are five interlocking injustices that America has to face, because they continue to cause policy violence. That is systemic racism, particularly seen through the lens of voter suppression, where people use voter suppression to get elected, and then, once they get elected, they pass policies that hurt the poor, mostly white women, children and the working poor. Systemic rac[ism] — systemic poverty, ecological devastation, the war economy and militarism, and the false moral narrative of religious nationalism that says, you don’t have to address those issues. We are saying, yes, America is going to have to face these five interlocking injustices and change them.

Finally, please view the series of powerful articles about Martin Luther King Jr. in the January 19, 2019 Global Research Newsletter.  One article tells of the December 8, 1999 civil law suit case summed up in Coretta Scott King’s words in quotation marks below1:

After four weeks of testimony and over 70 witnesses in a civil trial in Memphis, Tennessee, twelve jurors reached a unanimous verdict on December 8, 1999 after about an hour of deliberations that Dr. Martin Luther King, Jr. was assassinated as a result of a conspiracy. In a press statement held the following day in Atlanta, Mrs. Coretta Scott King welcomed the verdict, saying,

“There is abundant evidence of a major high level conspiracy in the assassination of my husband, Martin Luther King, Jr. And the civil court’s unanimous verdict has validated our belief. I wholeheartedly applaud the verdict of the jury and I feel that justice has been well served in their deliberations. This verdict is not only a great victory for my family, but also a great victory for America. It is a great victory for truth itself. It is important to know that this was a SWIFT verdict, delivered after about an hour of jury deliberation.

The jury was clearly convinced by the extensive evidence that was presented during the trial that, in addition to Mr. Jowers, the conspiracy of the Mafia, local, state and federal government agencies, were deeply involved in the assassination of my husband. The jury also affirmed overwhelming evidence that identified someone else, not James Earl Ray, as the shooter, and that Mr. Ray was set up to take the blame. I want to make it clear that my family has no interest in retribution. Instead, our sole concern has been that the full truth of the assassination has been revealed and adjudicated in a court of law… My husband once said, “The moral arc of the universe is long, but it bends toward justice.” To-day, almost 32 years after my husband and the father of my four children was assassinated, I feel that the jury’s verdict clearly affirms this principle. With this faith, we can begin the 21st century and the new millennium with a new spirit of hope and healing.”

So what is it to preach in these times of struggle?

As the central part of the sermon, and to answer that question, Barber declares:

To preach is to see the people who are crying out and the systems that are crushing them. It is to say, “Somebody’s hurting my people and it’s gone on far too long and we won’t be quiet and inactive anymore.” It is to do something about it. It is to join with others who are doing something about it.

When words are changed into deeds of liberation—that’s preaching. And anything else is just talking.

When the fruit of the lips become actions dedicated to justice—that’s preaching.

When a call goes out that unites people across the lines of race and class and creed and sexuality—now that’s preaching.

When the Poor People’s Campaign brings Natives and Asians and Black and White and Brown people together, and march together and organize together and go to to jail together for a moral revolution of values—that’s preaching.

When preachers go to the border and serve communion to the officers and communion to those who are holding back the immigrants and then tell them while they’re eating the communion that they need correction and that they’re wrong—that’s preaching.

When nuns lobby for healthcare and when preachers say, “I’m not gonna preach another funeral over somebody who died from the lack of healthcare and said ‘God called him home.'” Instead I’m going to say, “God may welcome them home, but the government killed them.” That’s preaching.

When churches and synagogues and mosques open their doors and offer sanctuary to families that are being ripped apart by ICE — that’s preaching!

And when that kind of preaching is happening, it is transformative. It changes the world. It might get you killed, but that same preaching will get you back up again. And if it doesn’t get you back up, preaching also gets folks pregnant. So you might be dead, but those behind you will come forth. Preaching always produces.