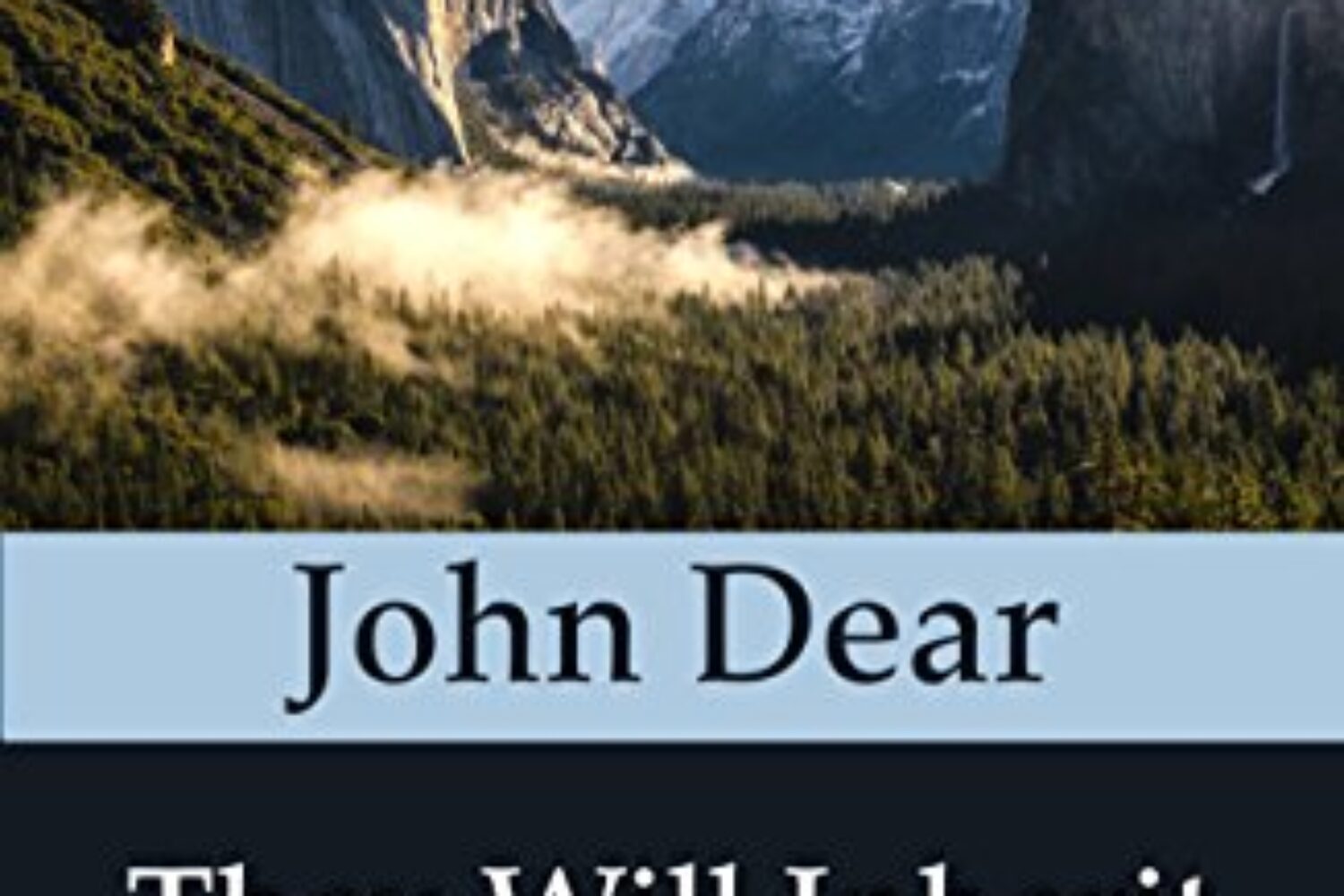 Book Review of: They Will Inherit the Earth: Peace and Nonviolence in a Time of Climate Change, John Dear, ORBIS BOOKS, 2018

In this landmark work, author, activist, and Nobel peace prize nominee Father John Dear connects the way of active nonviolence with solidarity with Creation, and shows how our global epidemic of violence and war could only lead to catastrophic climate change. He cites Jesus’ third Beatitude as the basis for his meditation: “Blessed are the meek, they will inherit the earth.” Thomas Merton said “meekness” was the biblical word for “nonviolence” (in the Gandhi/King sense), so Dear reflects how Jesus connected nonviolence with oneness with creation, how he practiced nonviolence and lived at one with creation, and how we need to do the same.

In this time of terrifying climate chaos, John Dear shares his own personal journey from the Upper West Side of Manhattan to the high desert of New Mexico where he now lives off the grid on a remote mesa. He shares his experience serving as a pastor in the mission church at Yosemite; encounters with New Mexican indigenous women who live at one with the earth while resisting nuclear weapons production at Los Alamos; his experience at Standing Rock in North Dakota, resisting the pipeline; reflections on the work of environmental leader Bill McKibben and Pope Francis’ monumental encyclical on the environment, Laudato Si; and ends with suggested steps forward into conscious, mindful solidarity with all creatures and Mother Earth through active, steadfast nonviolence, what he calls, “eschatological nonviolence,” walking the earth in the footsteps of the nonviolent Jesus into the Kingdom of God.

Dear friends, Peace be with you!

My new book, They Will Inherit the Earth: Peace & Nonviolence in a Time of Climate Change, is just out, and on March 1st I take off on a 3 month, 50 city national speaking tour.

I hope you can get the book (from Pace e Bene, or Orbis Books, or Amazon.com) and come to an event somewhere along the way. Here’s my tour schedule.

Below is the introduction to the book.

Thanks for all your do for justice, peace, and a new culture of nonviolence.

See you on the road! God bless you all!

I’ve spent my life chasing an idea—the idea of nonviolence. When I was young, I noticed that the greatest people in modern history—beginning with Mohandas Gandhi, Dorothy Day and Martin Luther King, Jr.—gave every moment of their lives to nonviolence. I decided that if that’s what our greatest people did with their lives, that’s what I should do to.

For nearly four decades now, I’ve pursued the ideal of nonviolence around the nation and the world. I’ve walked through the war zones of Israel, Palestine, El Salvador, Nicaragua, Guatemala, Colombia, Haiti, Iraq, Egypt, the Philippines, South Africa and Afghanistan; been arrested some eighty times in nonviolent civil disobedience against war and injustice; spent time in soup kitchens, homeless shelters, and jails across the US; and stood before a million people in crowded churches around the nation and the world struggling to articulate and lift up the vision of creative nonviolence.

One thing I’ve learned is that if you are going to stand up publicly every day of your life and advocate nonviolence—someone will inevitably stand up and justify violence whether through the just war theory, the latest US war, the need to have a gun or a bomb, or the broken human condition of violence. In other words, I’ve spent nearly every day of my life trying to talk people out of killing others, waging war, or quietly supporting the culture of violence. It’s been a long difficult trip, but as my friend Daniel Berrigan once said to me, at least it hasn’t been dull.

My life is a long pilgrimage of peace, a pilgrimage of nonviolence. After every trip, every arrest, every talk, I’ve returned home over the last fifteen years to my mountaintop hermitage on a remote mesa in New Mexico, where I look out at sixty miles of my own Southwest paradise. I take in the beauty of the surrounding landscape, breathe in the peace of creation, open the Gospel, sit in the presence of the Creator and listen again to the words of peace.

Over the decades, I have witnessed the destruction we humans have done to Mother Earth and her creatures. I’ve read about catastrophic climate change, and experienced the changes—the droughts, the strange weather, the extreme fires and tornadoes and rainfall—in the Southwest and elsewhere. I grieve for Mother Earth and the creatures who die because of our systemic greed, violence and destructive habits. But I never made or felt the connection between my vision of nonviolence and the ongoing destruction of Mother Earth. Until now.

One day, while sitting in my house studying the Sermon on the Mount, I saw it right there in front of me. “Blessed are the meek,” Jesus says in the Beatitudes. Thomas Merton wrote that “meekness” is the biblical word for nonviolence. “Blessed are the nonviolent,” Jesus is saying, as if he were an ancient Gandhi, an ancient Dorothy Day, an ancient Martin Luther King, Jr. “They will inherit the earth.”

There it is. Blessed are the meek, the gentle, the nonviolent—they will inherit the earth.

A life of nonviolence leads to oneness with creation and her creatures.

A life of violence, of course, leads to an abrupt discord with creation. In a time of permanent warfare, nuclear weapons, and catastrophic climate change, the message couldn’t be clearer. The God of peace, the nonviolent Jesus, and his holy spirit call us to practice nonviolence. In that way, we’ll renounce and stop our environmental destruction, tend our Garden of Eden together, and restore Creation to its rightful peace. In the process, we will discover peace with one another and all the creatures.

Here on my mesa mountaintop, surrounded by coyotes, jackrabbits and juniper, it all came home. I was inheriting the earth. I was one with creation. I had entered the Promised Land. A life of nonviolence had led me to this geography of peace.

More, this is the journey we are all called to live, to make the connection between active nonviolence and oneness with creation, so that we all might dwell peacefully in this paradise. In that moment, I saw not just the vision of peace and nonviolence, but the vision of a new creation, where we all live as one in peace with one another, Mother Earth and her glorious creatures. It’s that vision of peace, nonviolence and the New Creation, the vision of the Promised Land before us, the practice of proactive nonviolence, that offers a way out of environmental destruction, as well as permanent war, corporate greed, systemic racism, and extreme poverty.

All we have to do is open our eyes to the reality of creation before us, to be present to it, to take it in and honor it and welcome its gift of peace—and do so within the boundaries of nonviolence. In that present moment of peace, a new creation is offered to us once again.

Just as the vision of peace guided me to speak out over the years, especially after September 11th and the start of the US wars on Afghanistan and Iraq, so too a vision of creation inspires me to speak out against our destructive environmental policies, systems and habits so that Mother Earth and her creatures might survive, so that future generations might have a chance.

We need not be blind any longer. We can reclaim this vision of peace for ourselves, Mother Earth and her creatures. We can go forward in peace to make peace with creation and welcome a new future of peace at one with all creation. The choice is ours. All we have to do is take the next step on the path of peace.

Genre: new book by John Dear, nonviolence and earth care, They will Inherit the Earth