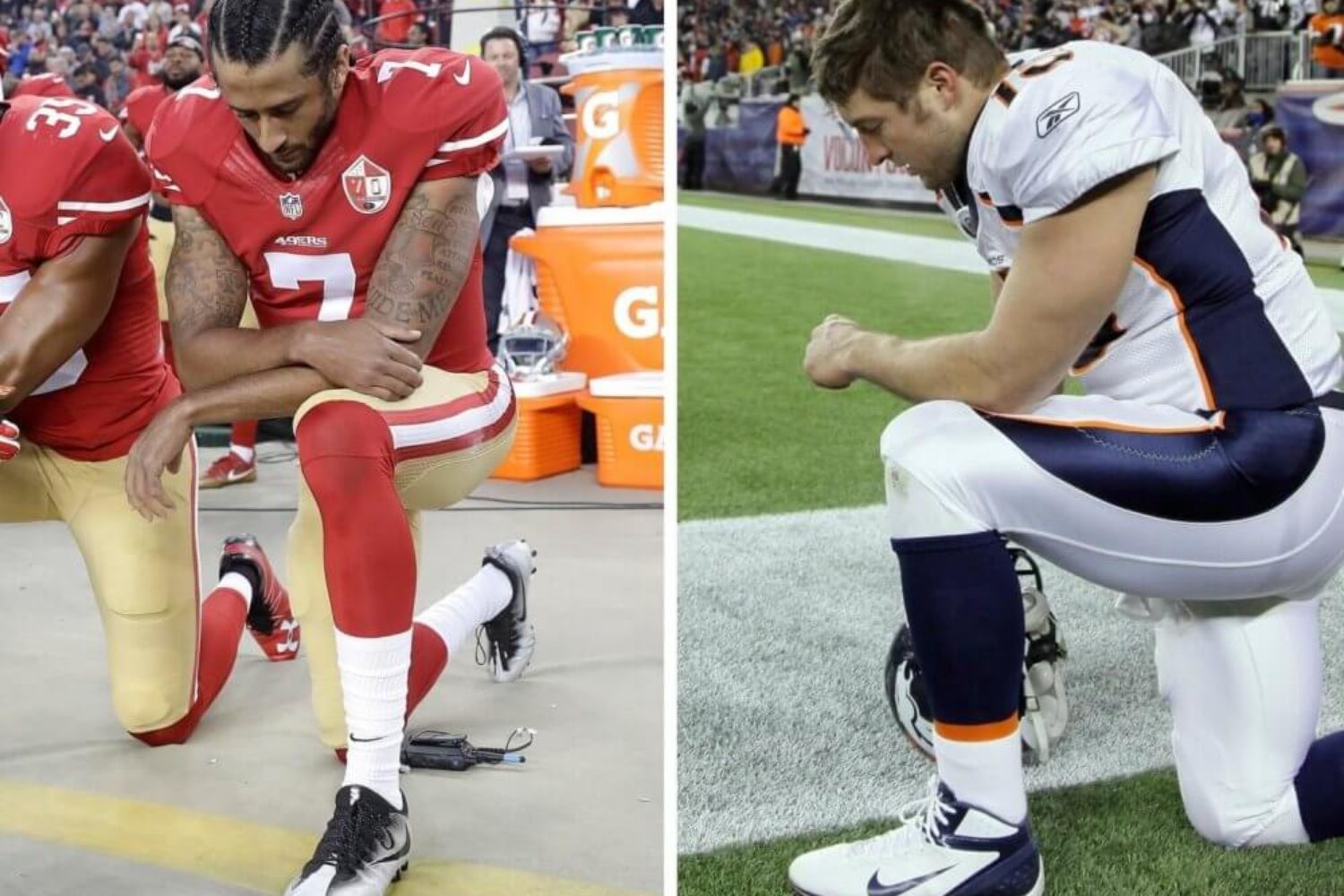 photo above: San Francisco 49ers quarterback Colin Kaepernick kneels during the national anthem before an NFL football game against the Los Angeles Rams in 2016. Denver Broncos quarterback Tim Tebow kneels on the sidelines before a playoff football game in 2012. (Stephan Savoia/Associated Press)

WN: The contrast below is a bit oversimplified. But it is fair to say: every true mystic is a prophet; every true prophet is a mystic.

They’re both Christian football players, and they’re both known for kneeling on the field, although for very different reasons.

One grew up the son of Baptist missionaries to the Philippines. The other was baptized Methodist, confirmed Lutheran, and attended a Baptist church during college.

Both have made a public display of their faith. Both are prayerful and devout.

This is the tale of two Christian sports personalities, one of whom is the darling of the American church while the other is reviled. And their differences reveal much about the brand of Christianity preferred by many in the church today.

Then, there’s Christianity on its knees.

It seems to me that Tim Tebow and Colin Kaepernick represent the two very different forms that American Christianity has come to.

And not just in the United States. In many parts of the world it feels as though the church is separating into two versions, one that values personal piety, gentleness, respect for cultural mores, and an emphasis on moral issues like abortion and homosexuality, and another that values social justice, community development, racial reconciliation, and political activism.

One is rallying at the March for Life. The other is getting arrested at Moral Monday protests.

You can see where this is going. The bifurcation of contemporary Christianity into two distinct branches is leaving the church all the poorer, with each side needing to be enriched by the biblical vision of the other.

Biblical Christianity should be, as Walter Brueggemann expresses it, “awed to heaven, rooted in earth.” We should, as he says, be able to “join the angels in praise, and keep our feet in time and place.”

Sadly, with the suspicion and animosity shown toward each side of the divide by the other, I can’t see a coming together any time soon.

In the meantime, Christianity remains on its knees in the West.

Michael Frost is the vice principal of Morling College in Sydney. A popular speaker around the world, he has written more than a dozen books, including “The Shaping of Things to Come,” “Exiles,” “The Road to Missional” and “Incarnate.” This piece was originally published on Frost’s blog.

Please click on: A tale of two Christians on their knees