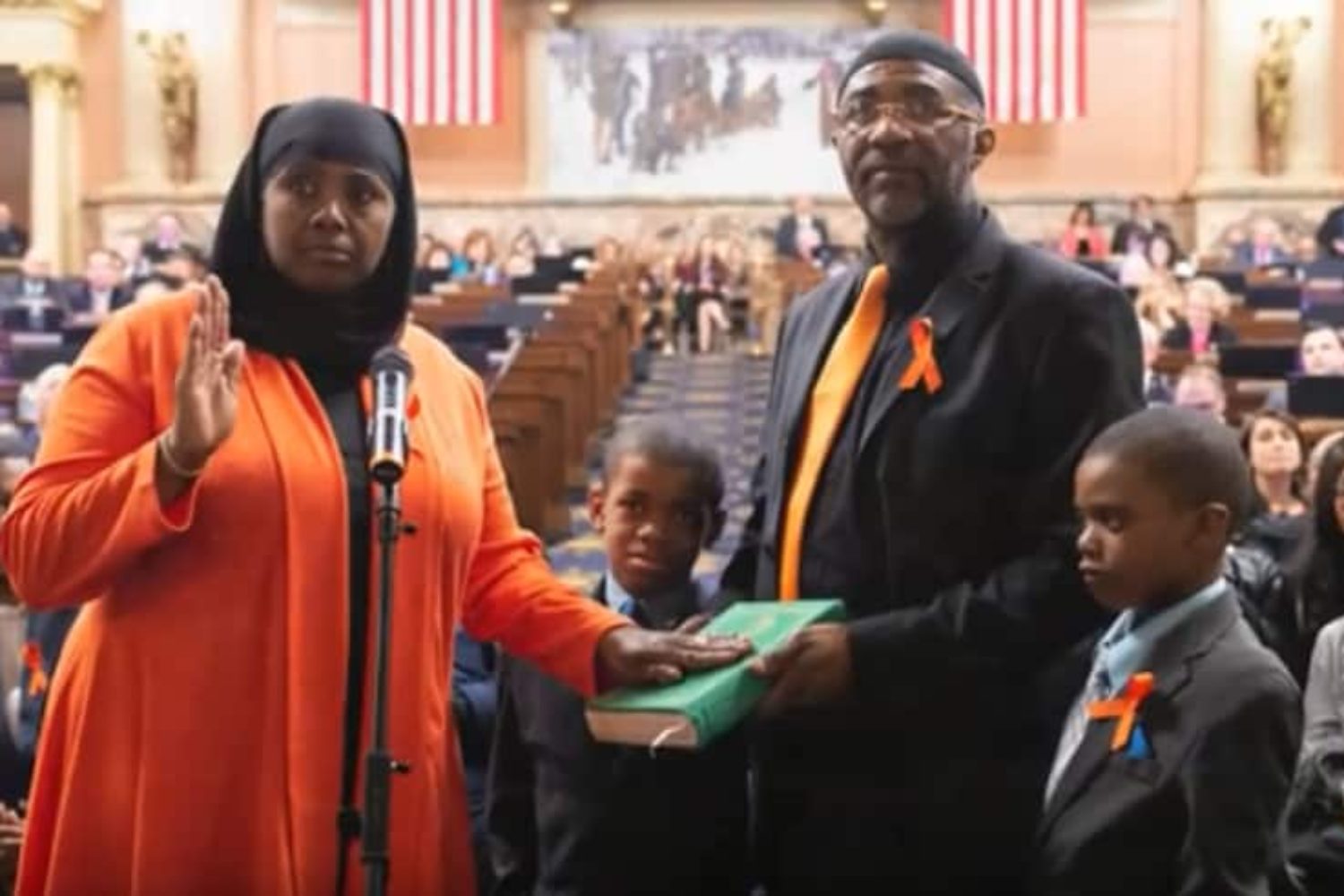 photo above: Pennsylvania state Rep. Movita Johnson-Harrell, a Democrat from Philadelphia, is the first Muslim woman to serve in the legislature. (Pennsylvania State House)

WN: The story highlighted below tells of a “christian” doing a kind of stand-in unbeknownst for the spirit of Anti-Christ.  Please watch (as much as you can):

“She doesn’t need to apologize,” [Franklin] Graham wrote on Facebook. “We don’t change who we are or what we believe because someone who is present may believe differently than we believe. I know [name withheld] would appreciate your prayers and encouragement. I always appreciate anyone who has the guts to stand up for Jesus.”

If the prayer truly represents “Jesus” — evoked by her 13 times in 100 seconds, one seemingly dripping with “christian” arrogance — then I either join Atheists Anonymous or become a Muslim…

A stark contrast to this woman’s prayer is the following story: about a Muslim who beautifully articulated the Way of Jesus, despite his own victimization, including the loss of his wife to the terrorist massacre:

CHRISTCHURCH, New Zealand — A man who survived New Zealand’s mosque attacks told a crowd of about 20,000 people on Friday [March 29] that he forgives the terrorist who killed his wife and 49 others.

Farid Ahmed was speaking at a national remembrance service held in Christchurch to commemorate those who died in the attacks two weeks ago.

Ahmed said that while he didn’t agree with the gunman’s actions, his Muslim faith taught him that even the terrorist was his brother. (See “Christchurch Mosque Attacks Survivor Farid Ahmed Says He Forgives Terrorist Who Killed His Wife“).

So no, Mr. Graham: the woman you praised did the inverse of “standing up for Jesus”, while our Muslim brother, Farid Ahmed, modelled the very Spirit of Jesus…

And: Amen to the response by Mr. Harris cited below

State Rep. [name withheld] was on the ninth “Jesus” of her opening prayer in the Pennsylvania statehouse when other lawmakers started to look uncomfortable.

Speaker Mike Turzai, a fellow Republican, glanced up — but [name withheld] carried on, delivering a 100-second ceremonial invocation that some of her colleagues decried as an offensive, divisive and Islamophobic display shortly before the legislature swore in its first Muslim woman.

“God forgive us — Jesus — we’ve lost sight of you, we’ve forgotten you, God, in our country, and we’re asking you to forgive us,” [she] said, followed by a quote from the Bible’s second book of Chronicles that implores God’s followers to “turn from their wicked ways.” Then she praised President Trump for his unequivocal support of Israel.

“I claim all these things in the powerful, mighty name of Jesus, the one who, at the name of Jesus, every knee will bow, and every tongue will confess, Jesus, that you are Lord, in Jesus’ name,” [the woman] said.

By the time she said “Amen,” [she] had invoked Jesus 13 times, deploying the name between prayerful clauses as though it were a comma. She mentioned “Lord” and “God” another six times each and referenced “The Great I Am” and “the one who’s coming back again, the one who came, died and rose again on the third day.”

As the prayer reached a crescendo, at least one member shouted objections. Turzai, standing behind her, looked up again and nudged her elbow, prompting her to quickly conclude the address. Afterward, the protests only grew louder.

Johnson-Harrell brought with her 55 guests, all there to see her historic moment at the statehouse. Thirty-two of them were Muslim, she told local news outlets. She later called for the General Assembly to censure [name withheld].

“Never have we started out with a prayer that divides us,” said the chamber’s top Democrat, Rep. Frank Dermody, speaking from the House floor. “Prayer should never divide us. It should bring us together.”

Rep. Jordan Harris, another high-ranking Democrat who called himself a devout Christian, criticized [the woman] for “weaponizing” her religion.

Prayer should never be weaponized, especially on a celebratory day for @RepMovita as she’s sworn in as the 1st Muslim woman to serve in the #PAHouse. This prayer was deeply disrespectful and meant to intimidate Movita & her family. We won’t stay silent on what matters! #LoveWins pic.twitter.com/V7vIepG2Da

Other state lawmakers called [her] prayer racist and said it was “fire and brimstone Evangelical prayer” that “epitomizes religious intolerance.”

Please click on: GOP legislator prays to Jesus for forgiveness