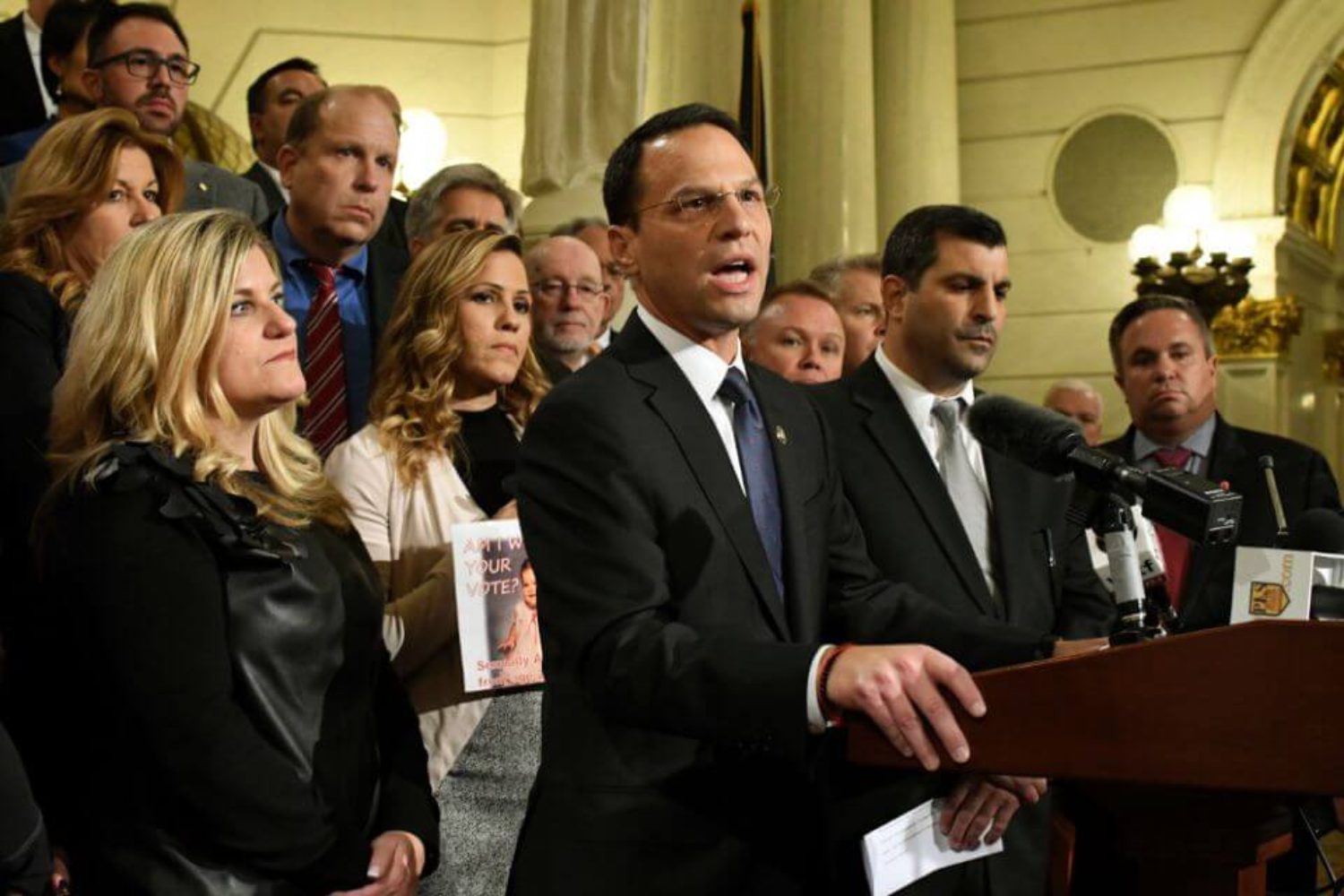 Accountability
Opinion
photo above: Attorney General Josh Shapiro of Pennsylvania speaks at a news conference in the state Capitol after legislation to respond to a landmark grand jury report accusing hundreds of Roman Catholic priests of sexually abusing children over decades stalled in the Legislature, on Oct. 17, 2018, in Harrisburg, Pennsylvania. Shapiro is flanked by lawmakers and victims of child sexual abuse. (AP/Marc Levy)

WN: This is extremely important for the Catholic Church to hear! While rampant abuse was still the tragic reality, and while leadership obviously failed repeatedly to deal decisively and proactively with widespread abuse, the article highlighted below, with a link in turn to the reporter’s article, adds a highly needed corrective to the Pennsylvania Grand Jury Report of last August. Fair is fair…

The report from a grand jury impaneled by the Pennsylvania attorney general to investigate child sexual abuse in the state’s Catholic dioceses has revived the furor over the abuse scandal, causing the resignation of the archbishop of Washington, D.C., and inspiring similar investigations in other states.

Steinfels argues that it is an oversimplification to assert, as does the report, that “all” victims “were brushed aside, in every part of the state, by church leaders who preferred to protect abusers and their institutions above all.”

Writing in the Catholic journal Commonweal, Steinfels acknowledges the horror of clerical abuse and the terrible damage done to children, but he complains that no distinctions have been made in the grand jury report from diocese to diocese, or from one bishop’s tenure to another. All are tarred with the same brush.

Steinfels’ article will be published in the magazine’s Jan. 25 issue and is currently available on its website.

A major fault with the report, according to Steinfels, is its failure to acknowledge the impact of the 2002 Dallas Charter, which changed dramatically how the church responded to abuse. The charter required reporting credible accusations to police, the establishment of lay review boards and the removal of any priest guilty of abuse.

He also notes that “a good portion of these crimes, perhaps a third or more, only came to the knowledge of church authorities in 2002 or after, when the Dallas Charter mandated automatic removal from ministry.” How can bishops be blamed for covering up crimes they did not know about?

“The report’s conclusions about abuse and coverup are stated in timeless fashion,” he writes. It leaves the impression that there has been no change in how bishops deal with abuse and that they are still leaving children at risk.

“There is not the slightest indication, not the slightest, that the grand jury even sought to give serious attention to the kind of extensive, detailed testimony that the dioceses submitted regarding their current policies and programs,” he states.

Steinfels points to the grand jury’s failure to report that Trautman attempted to meet with every victim and provided pastoral counseling and funds for therapy. It doesn’t reflect that in 2002 the bishop had all diocesan files reviewed by the Erie County district attorney, who concluded “no offenders remained in a position where they would present a danger.”

Most damning to Pennsylvania Attorney General Josh Shapiro, who ordered the grand jury report, is an Aug. 2, 2018, joint stipulation between him and Trautman stating that virtually all of the sweeping charges in the report were “not directed at Bishop Trautman.”

Those charges included statements in the report that “all (victims) were brushed aside”; that “the main thing” was to avoid “scandal”; that “priests were raping little boys and girls and the men of God … did nothing”; that diocesan officials knowingly “enabled offenders and endangered the welfare of children”; and that they blocked law enforcement from investigating “crimes against children.”

Steinfels does not argue that things are now perfect in the church, but that the sweeping allegations of the grand jury report were “designed to be a weapon in the debate” to support a legislative agenda.

“Its impassioned, graphic style; its characterization of church leadership as no better, perhaps even worse, than the abusers; its refusal to make distinctions between dioceses or between periods of time like pre- and post-Dallas Charter,” writes Steinfels, “all are aimed at mobilizing public opinion behind legislation suspending the statute of limitations for civil suits and discrediting church opposition.”

Acknowledging the progress made by the American bishops is important, as Steinfels writes, because their experience is very important for the rest of the church, which today often makes the same mistakes the Americans made in the past. There is a lot the bishops of the world can learn from the U.S. bishops, and to ignore the progress they have made is not helpful.

[Jesuit Fr. Thomas Reese is a columnist for Religion News Service and author of Inside the Vatican: The Politics and Organization of the Catholic Church.]