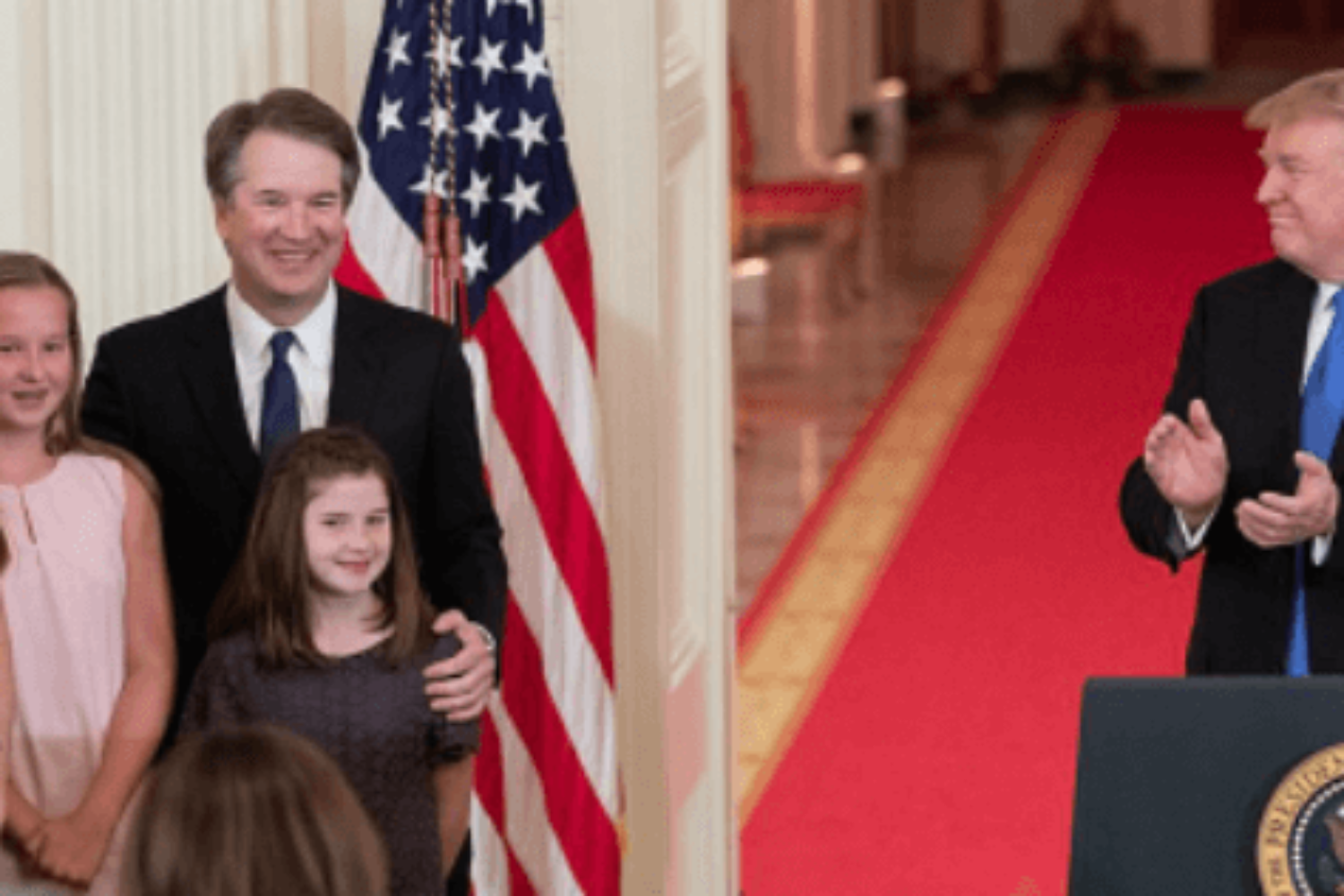 photo above: Kavanaugh Family at the The White House – courtesy Wikimedia Commons

then Houston (or God) we have a problem…

Over the years, I have often found myself wondering just what planet fellow “Christians” (?) have grown up on, what scriptures they in fact are reading, and what Christ they are following. (Christ himself warned about many false claims about himself (Matthew 24:23).) The article highlighted below endorses such wonderment.

In part, evangelical political identity coalesced around opposition to feminism (among other things). When feminists championed legislation to curb violence against women, evangelicals’ first instinct was to oppose it. But there was more to their resistance than knee-jerk reactionary politics. Evangelical identity was (and is) based in a gender system that makes violence against women easier to dismiss, excuse, and deny.

This statement is sure to provoke opposition from evangelicals themselves. After all, evangelicals have long championed “family values,” and at the heart of family values is the idea that men are called to protect and provide for women and children. In this way, the protection of women is at the very heart of evangelical self-identity.

Why, then, do so many evangelicals seem so bad at it?

Is this simply a matter of perception? Is this an unfair portrayal of evangelicals by a hostile, liberal media? Just another example of pervasive and pernicious anti-Christian bias, of the persecution Christians put up with, day in, day out?

Or, could it be that the things evangelicals do in the name of protecting women actually end up endangering them?

Bushnell1 and Southard2, however, remained minority voices. The majority of evangelicals in the twentieth century preferred to uphold a patriarchal gender order, defend it as God’s will, and even situate it as a nonnegotiable requirement of the Christian faith. This explains why, in the midst of the recent deluge of abuse allegations sweeping through evangelical communities, someone like John Piper could confidently blame the abuse of women on an “egalitarian myth,” not on the unequal power relations evangelicals have imposed on women and men. For evangelicals like Piper, complementarianism—which enshrines male authority over women in church, home, and society—is the solution, not the problem.

Multiple assumptions are at play here, and dangerous ones. Rather than granting women greater legal protections against harassment and abuse, they prefer to ascribe to husbands and fathers the power to protect women. But by placing such trust in patriarchal power, there is little recourse when those very men betray the women they are ostensibly responsible to protect. For some evangelicals, this scenario is simply unthinkable. For many more, their default setting is to believe men, not women, when allegations of abuse surface. And to blame women, not men, when women do come forward.

Where does this sort of thinking leave evangelical women and girls? In Sex and the Soul, Donna Freitas discovered an alarming inability on the part of evangelical young women to identify and resist sexual assault. The evangelical purity culture, a product of these patriarchal teachings, has left women ill-equipped both to exercise their own sexual agency, and to identify abuse when it takes place. (Freitas finds a similar pattern among women immersed in the secular “hook-up” culture on college campuses as well).

It’s worth noting that evangelicals are not speaking with one voice on this topic. Forty-eight percent of white evangelicals support an unrepentant perpetrator of sexual assault, but 36% find this unacceptable. Women like Beth Moore, Jen Pollock Michel, and Karen Swallow Prior (and many men, too) are speaking out in defense of sexual assault victims. Initially cautious when it came to the Kavanaugh allegations, Pollock Michel was stirred by what she heard at the hearing: “I don’t know how you hear that as a woman without feeling the complete horror and panic of that moment,” she explained to the Washington Post, referring to Ford’s account of the alleged assault. “As evangelical Christians, we say that Jesus is the way, the truth and the life. I think it really is a moment for us to be asking ourselves as Christians about our own kind of hunger for righteousness.”

As in the past, this view seems to be the minority view. But those who dismiss the abuse of women must confront the fact that, in doing, so they not only harm victims and enable abusers, but they also imperil any future attempts to witness to the gospel of Christ. And isn’t that the whole point of being “evangelical”?

Like Loading...
American White Evangelicals -- half of them -- apparently live on another Planet, and know a different violent Christ, study scriptures other than the Bible