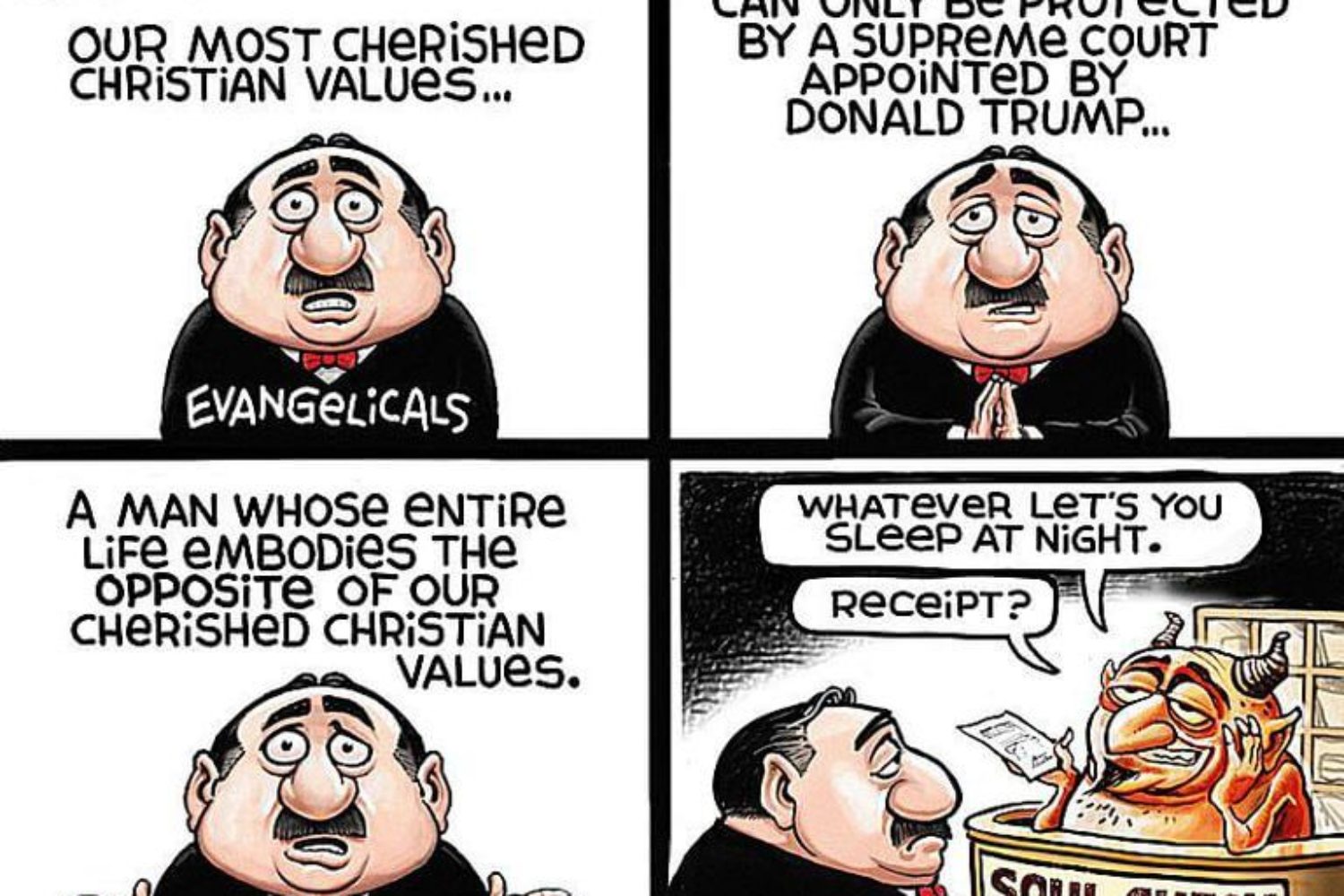 In a small Alabama town, an evangelical congregation reckons with God, President Trump and the meaning of morality

Please go to the end to read the fascinating article by the above title and subtitle1.

A kind of mantra in my Canadian white evangelical upbringing went, “You can be sincere in your beliefs, but you can also be sincerely wrong”. It was applied to every other kind of believer than the Evangelical…

In white evangelical America under Trump, that mantra comes home to roost. Applied to every size and shape of those excluded, it renders supremely ironic Queen Gertrude’s observation in Hamlet: “The lady doth protest too much, methinks.”

My mother was sadly that kind of Evangelical, who was so certain of her own place in Heaven that she spent a lifetime sorely distressed that others in her family might not make it there. In particular, her older brother turfed his faith upbringing while a young man. As consequence, there was not a major evangelistic crusade in our city where she could not be found on the phone or in person pleading with her brother to attend. As she often expressed it: “Maybe one more time under the sound of the Gospel he will this time pray the sinner’s prayer” — and my mom could be assured of his presence with her in Eternal Bliss.

By my teens I had made a simple observation: she never did the same with our next door neighbours, Jehovah’s Witnesses (and distinctly disliked by us kids and our parents – not only for that reason), who we were assured by our church and parents had one-way tickets to Hell. Put simply: by my mom’s reckoning, compared to family, they could go to Hell.

Perhaps I am being unkind about my mom’s faith in which I was raised? My wife, trained in the same kind of “quintessential Fundamentalism” (church historian Ernest Sandeen about Plymouth/Christian Brethrenism) as I, thinks I am. Another story…

What is indisputable is: my mom’s faith embraced unashamed, unthinking nepotism, as surely as the faith of those in the article highlighted below are fairly blinded by unashamed, unthinking narcissism. And if I actually today believed in the kind of Hell my mom did, I would say unreservedly: both manifestations are deadly sins worthy indeed of the very Hell they so assiduously and self-righteously feel assured they will avoid!

Hence the profound irony. And if such merely produced a smile on my or others’ lips, one could acknowledge the (perhaps) smugness and move on.

One of course cannot, however. For it is tragically precisely this very American white Evangelical base that voted Trump into power (81% of them in 2016!) And that support has never wavered.2 And it is precisely this very base that helps sustain Trump in power, thereby foisting on the world an evil of unprecedented proportions, even by American standards – which has been an Evil Empire from inception.

And this is where American white Evangelicalism is über-execrable. And this is where the twin Great Sins of Narcissism and Nepotism have created arguably the greatest danger to the world that America today, a vast, marauding and brutal Empire, has ever been.

Not “angel unawares” (Hebrews 13:2) is the person of Trump. Rather (malevolent masquerading) “angel of light” (II Corinthians 11:14).

The “Holy Trinity Icon” painted in the 15th century by Andrei Rublev, captures rapturously a foundational moment of positing Hospitality as central to all three Abrahamic faiths[ref number= “3”]The pictorial and technical qualities of the Holy Trinity Icon are certainly admirable and could scarcely be bettered as a model. So, for this reason at least, such an accolade is hardly surprising. Yet what won over the monks was something deeper and, moreover, more specifically Orthodox: the piece shows an ideal expression of God without God being represented. In the icon of the Trinity, we are in the presence of God, but we do not see him; we do not understand him. Rublev based his work on an episode of the Bible (Genesis 18: 2-15) that refers to the visit of three mysterious travellers, who announce to the aging Abraham and his wife Sarah – whose hospitality they share – that they would soon have a son. In fact, these three angels are hypostases of the One God – that is to say, they represent the three identities of the Trinity: God the Father, God the Son and God the Holy Spirit. All three figures illustrated here possess identical features. This is not a mistake: the three persons of the Trinity are identical, each fulfilling its own particular role.

In Rublev’s painting, the angel on the left represents the Father, the one in the middle the Son, and the one on the right the Holy Spirit, and while those in the centre and right turn their heads in the direction of the one on the left, he remains still, since the Father is the originating principle from whence all derives. All three are blessing the chalice, which contains a sacrificed calf, readied for eating. The calf signifies Christ the Saviour’s death on the cross, while its preparation as food represents the sacrament of the Eucharist. Each angel holds a slender staff in a delicate hand as a symbol of their divine power. The unifying symmetry of the meek yet noble figures is softened by the subtle use of shape and colour, while the gold and oranges hues bathe the scene in a warmth and luminosity that boosts its spiritual resonance. There is nothing naive or simplistic about their delicacy, nothing monotonous in the close resemblance between the angels. Their spirituality pervades the picture as they sit in a state of motionless contemplation with their almond-shaped eyes mysteriously fixed on a world unknown to us, a world from which these spiritual creatures, visiting earth for a mere instant, draw breath.

Behind them, there is: (1) a house (supposedly Abraham’s house), symbolizing the place of eternal salvation; (2) a tree (the Oak of Mamre), symbolizing the Tree of Life; and (3) a mountain, symbolizing Mount Tabor, where the Holy Spirit appeared during the Transfiguration of Christ. The blue worn by the figures is that of the divine. In the centre of the picture stands the chalice of salvation. The rectangle on the front of the table stands for the cosmos. The composition of the work is circular – that is, without beginning, without end, without hierarchy.

Rublev’s genius lay in his decision to reject most of the traditional elements which are found in the depiction of the Abraham and Sarah story of hospitality. He does not show Abraham, or Sarah, or the calf’s slaughter, nor does he show any details of the meal. And the angels are shown talking, not eating. Rublev makes the silent communion of the three angels the centre of the composition and the essence of the Trinity. It is an ideal representation of God, without God actually being represented (Holy Trinity Icon by Andrei Rublev: Interpretation, Iconography of Russian Orthodox Panel Painting; http://www.visual-arts-cork.com/famous-paintings/trinity-rublev.htm, last accessed July 23, 2018.). )).

Everything about Trump is direct inversion of this Abrahamic Faiths’ Foundational Core. Nothing is more foundational than Hospitality/Love! The corollary is, everything about the kind of American White Evangelicalism that voted Trump to, and continuously sustains him in, power is to the Core anti-Faith thus anti-Christ.

No, White American Evangelical friend: in Heaven there will not be as many dazzling appliances as one wishes at one’s finger tips; there will be no starry floors of gold; no vast manicured lawns and mansions (perhaps kept by Black slaves who otherwise should of course be in Hell?) for you to wander around on, while all the other Abrahamic Faithful and un-Christed (especially Muslims!) endure the unrelenting fires of Hell. No, for your display of everything contrary to the way of Christ, of Faith, of Hope, of Love, there will be salvation for you to be sure (God is inexhaustibly gracious), “even though only as one escaping through the flames.” (I Corinthians 3:15)

Does anyone register shock at this? One cannot do better than read in that case this by John Pavlovitz, addressed to American white Evangelicals (in the main). Well, one actually can do one better: We can all go and reread the Gospels and simply rediscover Jesus again for the very first time! – odd as it may sound. Or as writer John Alexander once wrote in dedicating a book (Your Money or Your Life) to his dad:

He was a rare fundamentalist, who actually believed verbal inspiration extends to the words of Jesus.

The article highlighted below is outstanding, and gave rise to the above…