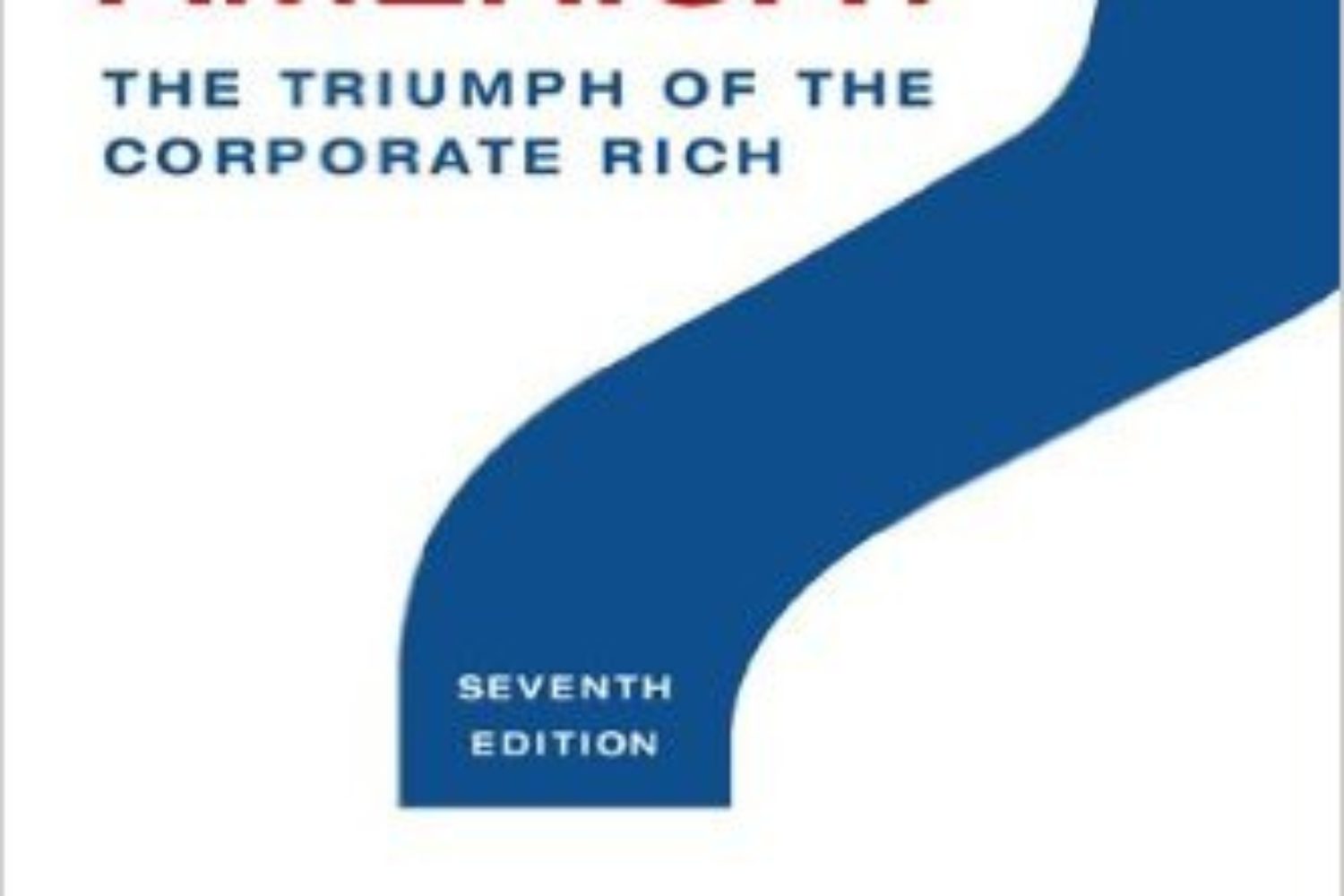 WN: Of course who rules America in turn rules the world. Such unbounded ruthlessly greedy power brokers have embraced and even to a large extent realized in the 21st century what was offered Jesus in the 1st (Matthew 4:1 – 11): “all the kingdoms of the world and their splendour.“ But “the art of the deal” represents in fact a soul-destroying no-win pact with the devil, one Jesus definitively rejected. For in order to “gain the whole world“, sadly they ineluctably “lose their own soul (Matthew 16:26).”

Below is the text copied directly from the the Home page of the website you may click on here. The book, front cover of which is above, is in its 7th edition.

Welcome to WhoRulesAmerica.net, a site about how power is distributed and wielded in the United States. It both builds upon and greatly supplements the book Who Rules America?, now in its 7th edition. The book’s new subtitle, “The Triumph of the Corporate Rich,” reflects the success of the wealthy few in defeating all of their rivals (e.g., organized labor, liberals, environmentalists) over the course of the past 35 years. The story of how the corporate rich won all the big battles is complicated, but most of the answers are in the new Who Rules America? and/or this Web site; there’s also a YouTube video of Bill giving an invited lecture on the topic.

Among the many things you’ll find here: supplementary information and updates for readers of WRA; an overview of the American power structure at the national level and an in-depth look at power at the local level; a look at the wealth and income distribution in the U.S.; and an overview of the Four Networks theory of power, which provides the best general theory of power and social change within which to situate the class-domination theory we’ve developed specifically for the United States.

There’s a special section (including photos and first-hand accounts) about a unique elite social club that’s been holding its annual California summer retreat for well over a century: The Bohemian Club & The Bohemian Grove. And there are analyses of social movements and social change based on research in the social sciences; critiques of alternative theories of power; links to Web sites and books about power and social change in the United States; and much more. You can use the menu on the left side of the page to navigate through the site (each section heading clicks open to reveal several documents).

Q:  So, who does rule America?

A:  The owners and managers of large income-producing properties; i.e., the owners of corporations, banks, other financial institutions, and agri-businesses. But they have plenty of help from the managers and experts they hire. You can read the essential details of the argument on this site, or read the new seventh edition of Who Rules America?.

A:  No, not quite. The local level is dominated by the land owners and businesses that own downtown real estate and big shopping malls. They come together as growth coalitions, which turn cities into “growth machines” when they gain control of local government. Everything is about land values for them, and that requires office buildings, stadiums, museums, concert halls, shoppers, conventions, and tourists.

Q:  Do they rule secretly from behind the scenes, as a conspiracy?

A:  No, conspiracy theories are all wrong for many reasons. It’s true that some corporate leaders lie and steal, and that some government officials — including the President — initiate secret actions and then try (and usually fail) to keep them out of the newspapers. But those activities are not what is meant by a conspiracy theory, most of which involve an imagined small group of people secretly plotting to gain or retain control of the government through illegal means.

A:  That’s a complicated story, but the short answer is through lobbying, open and direct involvement in general policy planning on the big issues, participation (in large part through campaign donations) in political campaigns and elections, and through appointments to key decision-making positions in government.

Q:  Are you saying that elections don’t matter?

A:  No, but they usually matter a lot less than they could, and a lot less in America than they do in other industrialized democracies. That’s because of the nature of the electoral rules and the unique history of the South.

A:  Yes, it does, but few if any people pay much attention to that research.

A:  No! Those sites (and many others with documents purporting to tell you “who rules America”) are run by white supremacist/neo-Nazi organizations.