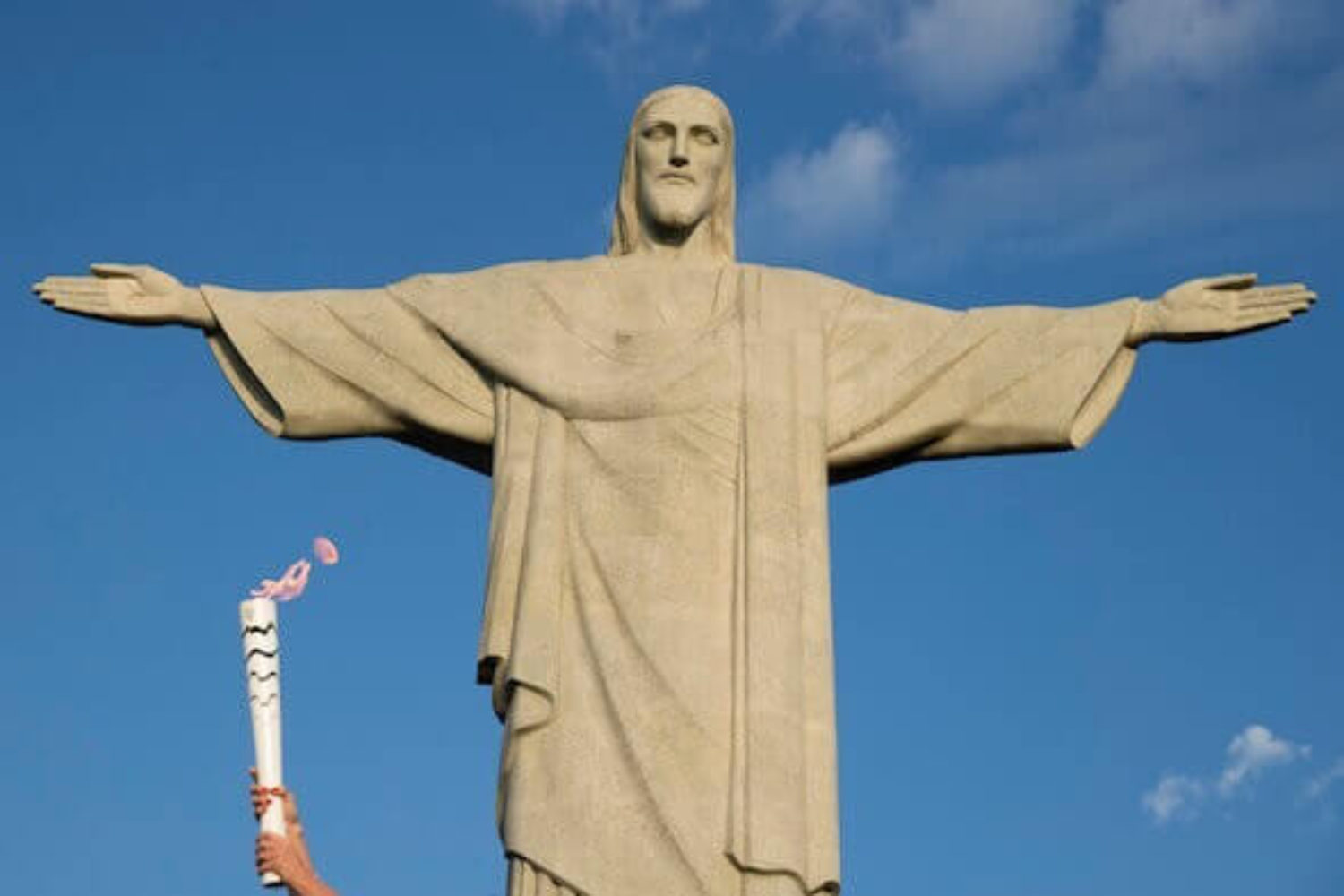 photo above: The Olympic torch being carried in front of the Christ the Redeemer statue on the way to the opening ceremony of the Summer Games in Rio de Janeiro on Aug. 5. (Felipe Dana / AP)

Besides what we read in the article linked below, the origin of the Games in ancient Greece was anything but peaceful, or aimed at “international” (intercity-state) cooperation.  On the contrary:

This seems extreme but is entirely in keeping with the Greek ethos. Part of the reason the ancient Games were so uncompromising and often violent has to do with what was at stake. The Greeks, for the most part, had no heaven; with some notable exceptions, good and bad all went to the same gray, characterless, drizzly underworld after death, and that was that. In the absence of a post-mortem reward for moral goodness, the one thing you could strive for was immortal fame — doing something so glorious that men would talk of you in years, centuries, millenniums to come. As anyone who suffered through “Troy” knows, this was the all-powerful motivation for the heroes of Homer’s “Iliad,” but it was also often the motivation for ordinary, real-life inhabitants of the Greek city-states, for whom there was no conceivable earthly achievement higher than an Olympic victory. (Athenian families, at the birth of a baby boy, would place an olive wreath on the front door, signaling their hope that the infant might one day be a victor at the Olympics.)

The above from this source.

But aren’t the Olympics a wonderful venue for young, talented athletes who have spent years honing their skills? As the hilariously prescient, satirical video-podcast “Ultra Spiritual Life” noted about athletes at the Rio Olympics, “I’m grateful that this 15-year-old girl had parents who were emotionally abusive enough to live through her. Nine hours of training every day since she was 3 years old equals trauma in her psyche, stress fractures in her legs, but it equals national pride for me.” Stories about young children in China being trained for the 2012 Olympics revealed a shocking level of brutality meted out for the national pride of winning a gold medal. Additionally, the financial burden of training for the Olympics, particularly in countries like the U.S., which does not provide subsidies for athletes’ families, is huge and often leads to bankruptcy.

Even heartwarming stories of underdogs winning Olympic medals are not worth the price of the games. The story of a young Afro-Brazilian girl, Rafaela Silva, who hails from the famed City of God favela and won a gold medal, provided just the “inspiration” fodder that many people, including liberals, like to tout. But Silva’s story plays right into the neoliberal myth of individual success being possible for anyone who simply works hard enough. What about the broader community from which Silva emerged? Brazil’s favelas are among the most dangerous places for children to grow up, rife with poverty, drugs and violence, and Silva’s story has no practical, positive bearing on them. In fact, the Olympics only ensure that the state will spend years paying off the debt of hosting the games rather than spending the money on the welfare of its residents.

Are the games really worth the collective and individual sacrifice that so many communities and legions of people pay? Ultimately, the Olympics, like most global sporting events (such as World Cup soccer), distract us from the real work of solving societal ills, divert far too many resources away from human needs and amplify nationalist fervor and existing divides. All in the service of athletes vying for medals and millions of spectators who wrap themselves in flags while cheering them on.