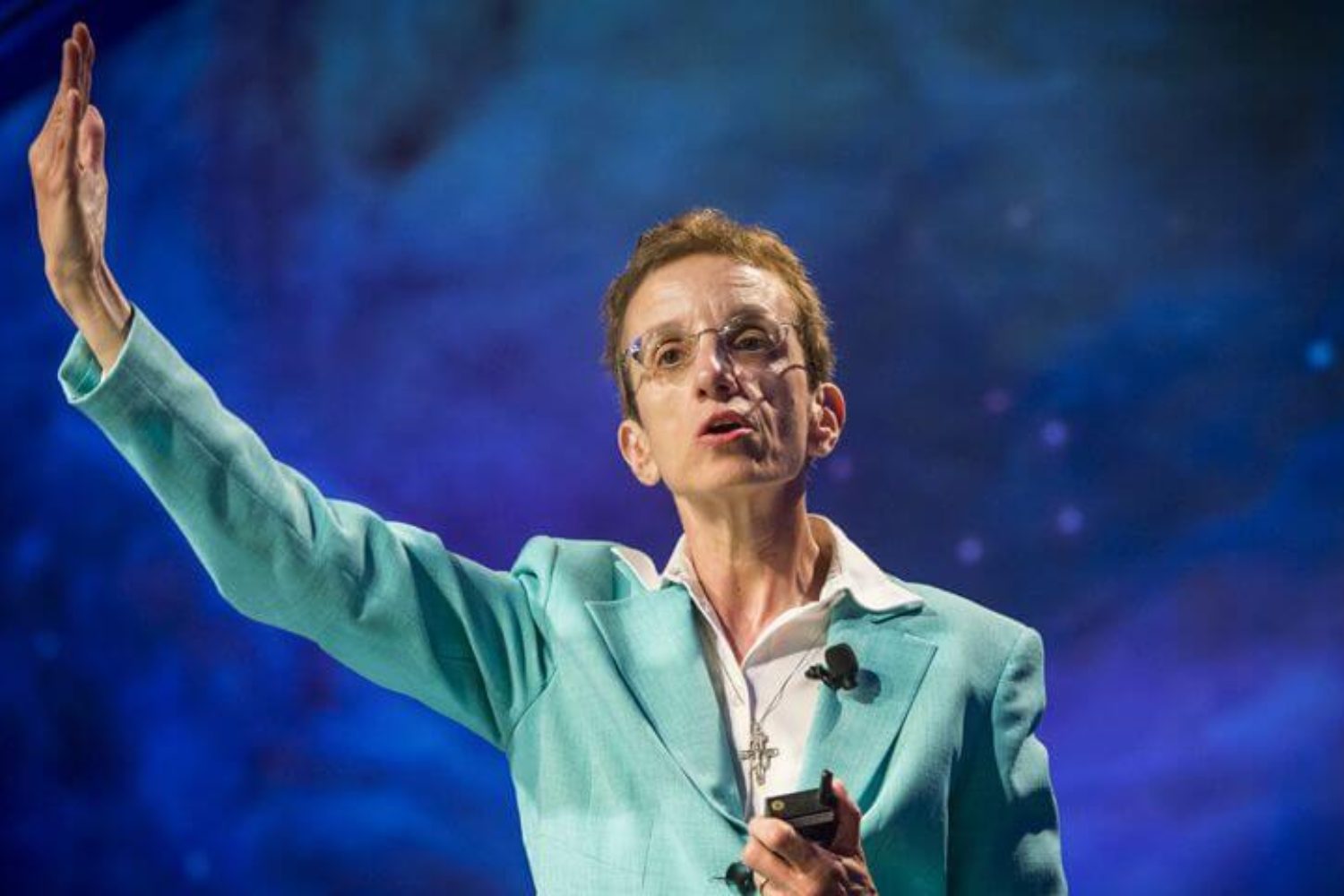 WN: What an incredible woman of God! Please visit Amazon for her books in print. And if in the Vancouver area this fall, please consider attending this weekend with her:

Becoming a New People for a New Planet: Exploring the Dynamism of Nature with Ilia Delio PhD

Here we will explore Teilhard de Chardin’s vision of planetization by focusing on the complementarity between humans and cosmos and the mystical dimension of being, in which the outer world is within and the inner world is without.  We will build on the core energy of Love at the heart of the cosmos and examine how artificial intelligence is changing the boundaries of relationships with the potential for an ultrahumanism up ahead.

“If we attend only to the breakdown,” Delio says, “we think we’re over. We see death. But that’s a closed-system way of thinking.”

A Franciscan sister, Delio reads the struggle between the Vatican and the Leadership Conference of Women Religious through the lens of systems theory, an idea often employed in the study of evolution.

Open systems, she says, remain open to their surrounding environment, and they respond to changes in the environment by reorganizing themselves. After the Second Vatican Council, most orders of women religious underwent a similar reorganization, transforming structures of rigid conformity into non-hierarchical, collaborative communities.

“An open system has a capacity for newness. New basins of attraction arise within the system and pull it, over time, in a new pattern of life. So chaos really is a saving grace,” she says, adapting the notion of chaos theory from physics.

Welcome to the mind of Ilia Delio, where most questions related to the church or theology are answered throuFgh analogies to the physical sciences.

Delio is the rare theologian with doctoral degrees in both science and theology**. But at her heart, she is a teacher. She longs for you to see what she sees: the vast interconnectedness of human beings, God, and the universe.

Her engaging personality has made her a popular speaker not only among women religious, but in spiritual and academic circles. The breadth of her knowledge can make these events downright epic. When Delio addressed the LCWR [Leadership Conference of Women Religious] assembly in 2013, she spoke for more than two and a half hours over the course of two sessions, then took questions for another hour.

Delio’s intellect works like a hummingbird in flight. As she speaks, she moves swiftly and precisely from physics to medieval theology to the 20th-century mystics. She feverishly taps each of these sources, cross-pollinating ideas and generating new, complex images of God and the universe.

Her writing, on the other hand, has been known to bedevil even some sophisticated theological minds. More than one LCWR community had to develop a study guide to her 2013 book, The Unbearable Wholeness of Being, before the assembly. It isn’t so much that Delio’s prose is dense, but that her theological imagination is so fertile it cannot resist making connections between religious and scientific ideas. The resulting insights can overwhelm readers who are new to the concepts.

But Delio insists that her message really is quite simple.

“I want everyone to see that we are loved into being at this moment just as we are by a God of unconditional love,” Delio says.

“We emerge out of this long, cosmic process we call evolution. But evolution is about deep relationality,” she continues. “We are created for love, and that’s what keeps pulling us onward.”

Perhaps what is most intriguing about Delio isn’t her understanding of evolution, but that evolution is the story of her life.

Born Denise Delio in 1955, her upbringing was more “Sopranos” than scientific — minus the mob ties, of course. She was raised in northeastern New Jersey by second-generation Italian immigrants. Her mother was a nurse and her father worked for the railroad. Delio fantasized from an early age about becoming a nun — a dream her Sicilian mother, left wary by her sister’s negative experience in a convent, tried for years to discourage.

And she succeeded for much of her daughter’s youth. A gifted science student who dreamed of one day winning a Nobel Prize, Delio earned undergraduate and master’s degrees in biology. A doctorate in pharmacology from Rutgers University’s New Jersey Medical School followed with a specialization in spinal cord physiology. Her research earned her a post-doctoral fellowship at Johns Hopkins University School of Medicine to study the pathology of Lou Gehrig’s disease.

But just months before Delio was to begin her new post, Thomas Merton’s spiritual masterpiece The Seven Storey Mountain rekindled her desire for contemplative life.

“I saw my life in his life,” Delio says. “I longed to love the world from afar and live only for Christ.”

She declined the fellowship. Her classmates and soon-to-be colleagues were baffled. “They were convinced that I had either inhaled a toxic chemical in the lab or had suffered a nervous breakdown,” she laughs.

A devotee of the Latin Mass, Delio sought an austere, cloistered life. In 1984, she joined the Carmelite order. Their long, traditional habit represented the holiness and sacrifice she craved. In a photo taken on the day of her profession of vows, she bears a resemblance to Therese of Lisieux. A crown of flowers atop her veiled head symbolizes her status as a bride of Christ.

Delio contemplates the image for a moment. “I was happy for about 20 minutes,” she jokes at first, then turns serious. “The Carmelites really taught me how to pray.”

They also gave Delio her name. “Ilia” is the Greek feminine translation of Elijah, the prophet who, according to the Hebrew Scriptures, ascended Mount Carmel to challenge 450 prophets of the false god Baal.

But her romanticized vision of religious life soon buckled under the tightly controlled day-to-day realities of monastic life. “The God to whom I had felt so drawn began to melt into the darkness,” Delio wrote in a 2009 essay. “I wondered whether I had chosen solitary confinement.”

After four years in the cloister, she requested a leave and was sent to discern with the Franciscans in North Plainfield, N.J.* Though they, too, wore the habit and followed a somewhat regimented life, they had an openness to the world that Delio found freeing.

“As I listened to their stories of mission,” she recalls, “I began to see that Jesus comes in many ways.”

Delio redid her novitiate and joined the Franciscans, but her knowledge of theology remained rudimentary. The community sent her to pursue graduate studies in religion at Fordham University in New York.

During the school year, she lived with Ursuline sisters in the Bronx. As the burden of both completing her doctoral studies and directing vocations for her Franciscan community weighed on her shoulders, Delio says it was the Ursulines’ kind support and attentiveness to her needs that helped her “see what the Incarnation is really about.”

“Suddenly I saw God present in these nuns wearing jeans and sweatshirts,” she recalls.

At Fordham, she immersed herself in historical theology, finding inspiration among medieval theologians, particularly St. Bonaventure, on whom she would write her doctoral dissertation. Her dissertation director, renowned scholar Ewert Cousins, also introduced her to the work of Pierre Teilhard de Chardin, the Jesuit paleontologist whose mystical writings on Christianity and the cosmos have inspired generations of Catholic theologians. She was drawn to the way he synthesized his deep scientific knowledge with his mystical vision of the world.

Teilhard developed the concept of evolutionary Christianity, theorizing that the whole of creation was progressing toward fulfillment in Christ. The goal of the universe, which he called the Omega Point, was full consciousness with God.

“He believed that love energy was at the heart of the Big Bang,” she says. “As love emerges in evolution, there is a rise in consciousness.”

Like Teilhard, Delio is as steeped in science as she is devoted to God. She isn’t simply an expert in his work. She shares his spirit.

“He was a deeply incarnational, deeply spiritual man,” she says. “I guess you could say we share an incarnational resonance.”

Delio’s latest book, From Teilhard to Omega: Co-creating an Unfinished Universe, is an edited volume of essays by 13 of the finest scholars on science and religion. She challenged each writer to apply Teilhard’s insights to the needs of the current age.

After a young adulthood spent trying to transcend the world, Delio now wants to be immersed in it. “The Franciscan way is the way of the concrete,” she says, “seeing the love of God in the leper, among the flowers and birds, in the moon. Francis taught us a consciousness of God in the concrete.”

But as it was with her namesake, Elijah, Delio does find herself sometimes alone on a mountain. Like a prophet, she is mostly unbound from institutions. Not only is she living out a renewed form of religious life, her position at Georgetown is untenured.

Not surprisingly, she is comfortable in the chaos, insisting that it is indeed a grace. “For me, it’s a gift not to be too stable in anything. I think it allows me to be unbridled in my creativity.”

“I think this is how God works,” she adds. “God untethers some people in history so that they’re free to give themselves over in a radical way to create and to participate in the new.”