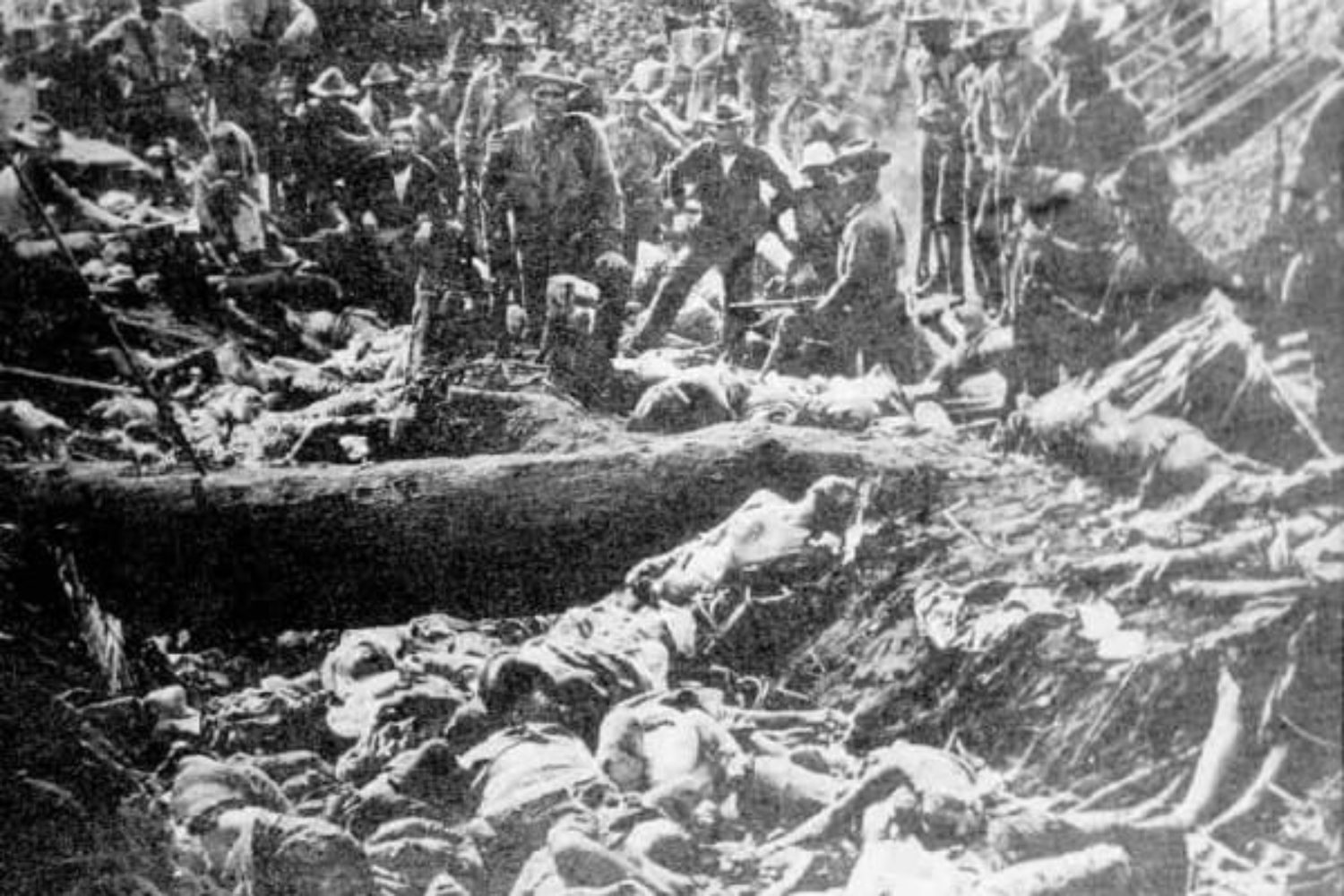 Listen to this article
by John Bellamy Foster and Robert W. McChesney

photo above: The Moro Massacre (March 9, 1906): Phillipines – emblematic of the real meaning of “the white man’s burden”

Rudyard Kipling coined the phrase in the famous poem:

The White Man’s Burden: The United States and The Philippine Islands.1 In this poem, Kipling urged the U.S. to take up the “burden” of empire, as had Britain and other European nations. Published in the February, 1899 issue of McClure’s Magazine, the poem coincided with the beginning of the Philippine-American War and U.S. Senate ratification of the treaty that placed Puerto Rico, Guam, Cuba, and the Philippines under American control. Theodore Roosevelt, soon to become vice-president and then president, copied the poem and sent it to his friend, Senator Henry Cabot Lodge, commenting that it was “rather poor poetry, but good sense from the expansion point of view.” Not everyone was as favorably impressed as Roosevelt. The racialized notion of the “White Man’s burden” became a euphemism for imperialism, and many anti-imperialists couched their opposition in reaction to the phrase. See here.))

Take up the White Man’s burden —
Send forth the best ye breed —
Go bind your sons to exile
To serve your captives’ need;
To wait in heavy harness,
On fluttered folk and wild —
Your new-caught, sullen peoples,
Half-devil and half-child.

Take up the White Man’s burden —
In patience to abide,
To veil the threat of terror
And check the show of pride;
By open speech and simple,
An hundred times made plain
To seek another’s profit,
And work another’s gain.

Take up the White Man’s burden —
The savage wars of peace —
Fill full the mouth of Famine
And bid the sickness cease;
And when your goal is nearest
The end for others sought,
Watch sloth and heathen Folly
Bring all your hopes to nought.

Take up the White Man’s burden —
And reap his old reward:
The blame of those ye better,
The hate of those ye guard —
The cry of hosts ye humour
(Ah, slowly!) toward the light: —
“Why brought he us from bondage,
Our loved Egyptian night?”

Take up the White Man’s burden —
Ye dare not stoop to less —
Nor call too loud on Freedom
To cloak your weariness;
By all ye cry or whisper,
By all ye leave or do,
The silent, sullen peoples
Shall weigh your gods and you.

Take up the White Man’s burden —
Have done with childish days —
The lightly profferred laurel,
The easy, ungrudged praise.

Comes now, to search your manhood
Through all the thankless years
Cold, edged with dear-bought wisdom,
The judgment of your peers!

This is where my conservative “friends” cry foul and accuse me of being self-flagellating liberal white trash! I’ll grant them this much: There is at least a danger of being “white liberal racist“. A “burden” of such kind is also to be eschewed.

The article highlighted below recounts a horror story: one ongoing and endlessly self-justifying. Jesus and preceding Hebrew prophets ever called for “eyes to see“, “ears to hear“. Without that kind of converted vision and audition, there is left only the white man’s blindness, the white man’s deafness. It’s that stark. It is the (tragic and brutal) white man’s truth…

We are living in a period in which the rhetoric of empire knows few bounds. In a special report on “America and Empire” in August, the London-based Economist magazine asked whether the United States would, in the event of “regime changes…effected peacefully” in Iran and Syria, “really be prepared to shoulder the white man’s burden across the Middle East?” The answer it gave was that this was “unlikely”—the U.S. commitment to empire did not go so far. What is significant, however, is that the question was asked at all.

Current U.S. wars in Afghanistan and Iraq have led observers to wonder whether there aren’t similarities and historical linkages between the “new” imperialism of the twenty-first century and the imperialism of the nineteenth and early twentieth centuries. As Jonathan Marcus, the BBC’s defense correspondent, commented a few months back:

It should be remembered that more than one hundred years ago, the British poet Rudyard Kipling wrote his famous poem about what he styled as “the white man’s burden”—a warning about the responsibilities of empire that was directed not at London but at Washington and its new-found imperial responsibilities in the Philippines. It is not clear if President George W. Bush is a reader of poetry or of Kipling. But Kipling’s sentiments are as relevant today as they were when the poem was written in the aftermath of the Spanish-American War. (July 17, 2003)

Kipling’s “White Man’s Burden,” subtitled “The United States and the Philippine Islands,” was published in McClure’s Magazine in February 1899.2 It was written when the debate over ratification of the Treaty of Paris was still taking place, and while the anti-imperialist movement in the United States was loudly decrying the plan to annex the Philippines. Kipling urged the United States, with special reference to the Philippines, to join Britain in the pursuit of the racial responsibilities of empire:

Your new-caught sullen peoples,
—Half devil and half child.

Many in the United States, including President McKinley and Theodore Roosevelt, welcomed Kipling’s rousing call for the United States to engage in “savage wars,” beginning in the Philippines. Senator Albert J. Beveridge of Indiana declared: “God has not been preparing the English-speaking and Teutonic peoples for a thousand years for nothing but vain and idle self-contemplation and self-admiration….He has made us adept in government that we may administer government among savage and senile peoples.” In the end more than 126,000 officers and men were sent to the Philippines to put down the Filipino resistance during a war that lasted officially from 1899 to 1902 but actually continued much longer, with sporadic resistance for most of a decade. U.S. troops logged 2,800 engagements with the Filipino resistance. At least a quarter of a million Filipinos, most of them civilians, were killed along with 4,200 U.S. soldiers (more than ten times the number of U.S. fatalities in the Spanish-American War).3

Kipling’s Message to Imperialists After One Hundred Years

Although imperialism has remained a reality over the last century, the term itself was branded as beyond the pale within polite establishment circles for most of the twentieth century—so great was the anti-imperialist outrage arising out of the Philippine-American War and the Boer War, and so effective was the Marxist theory of imperialism in stripping the veil away from global capitalist relations. In the last few years, however, “imperialism” has once again become a rallying cry—for neoconservatives and neoliberals alike. As Alan Murray, Washington Bureau Chief of CNBC recently acknowledged in a statement directed principally at the elites:

If one were to doubt for a moment that the current expansion of U.S. empire is but the continuation of a century-long history of U.S. overseas imperialism, Michael Ignatieff (Professor of Human Rights Policy at Harvard’s Kennedy School of Government) has made it as clear as day:

The Iraq operation most resembles the conquest of the Philippines between 1898 and 1902. Both were wars of conquest, both were urged by an ideological elite on a divided country and both cost much more than anyone had bargained for. Just as in Iraq, winning the war was the easy part….More than 120,000 American troops were sent to the Philippines to put down the guerrilla resistance, and 4,000 never came home. It remains to be seen whether Iraq will cost thousands of American lives—and whether the American public will accept such a heavy toll as the price of success in Iraq (New York Times Magazine, September 7, 2003).

Despite [Niall Ferguson, Herzog Professor of History at the Stern School of Business, New York University]’s, claim that “no one would dare” to call this “the white man’s burden” today since it is “politically incorrect,” sympathetic references to this term keep on cropping up—and in the most privileged circles. Boot—hardly a marginal figure since affiliated with the influential Council on Foreign Relations—is a good example. Like Ferguson himself, he tries to incorporate the “white man’s burden” into a long history of idealistic intervention, downplaying the realities of racism and imperialism: “In the early twentieth century,” [Max Boot] writes in the final chapter of his book (entitled “The Savage Wars of Peace: Small Wars and the Rise of American Power”), “Americans talked of spreading Anglo-Saxon civilization and taking up the ‘white man’s burden’ today they talk of spreading democracy and defending human rights. Whatever you call it, this represents an idealistic impulse that has always been a big part in America’s impetus for going to war.”

Today’s imperialists see Kipling’s poem mainly as an attempt to stiffen the spine of the U.S. ruling class of his day in preparation for what he called “the savage wars of peace.” And it is precisely in this way that they now allude to the “white man’s burden” in relation to the twenty-first century. Thus for the Economist magazine the question is simply whether the United States is “prepared to shoulder the white man’s burden across the Middle East.”

As an analyst of as well as a spokesman for imperialism Kipling was head and shoulders above this in the sense that he accurately perceived the looming contradictions of his own time. He knew that the British Empire was overstretched and doomed—even as he struggled to redeem it and to inspire the rising United States to enter the imperial stage alongside it. Only two years before writing “The White Man’s Burden” he wrote his celebrated verse, “Recessional”:

Far-called, our navies melt away;
—On dune and headland sinks the fire;
Lo, all our pomp of yesterday
—Is one with Nineveh and Tyre!
Judge of Nations, spare us yet,
Lest we forget—lest we forget!

The United States is now leading the way into a new phase of imperialism. This will be marked not only by increased conflict between center and periphery—rationalized in the West by veiled and not-so-veiled racism—but also by increased intercapitalist rivalry. This will likely speed up the long-run decline of the American Empire, rather than the reverse. And in this situation a call for a closing of the ranks between those of European extraction (Samuel Huntington’s “clash of civilizations” argument or some substitute) is likely to become more appealing among U.S. and British elites. It should be remembered that Kipling’s “White Man’s Burden” was a call for the joint exploitation of the globe by what [W. E. B.] Du Bois was later to call “the white masters of the world” in the face of the ebbing of British fortunes.4 At no time, then, should we underestimate the three-fold threat of militarism, imperialism, and racism—or forget that capitalist societies have historically been identified with all three.