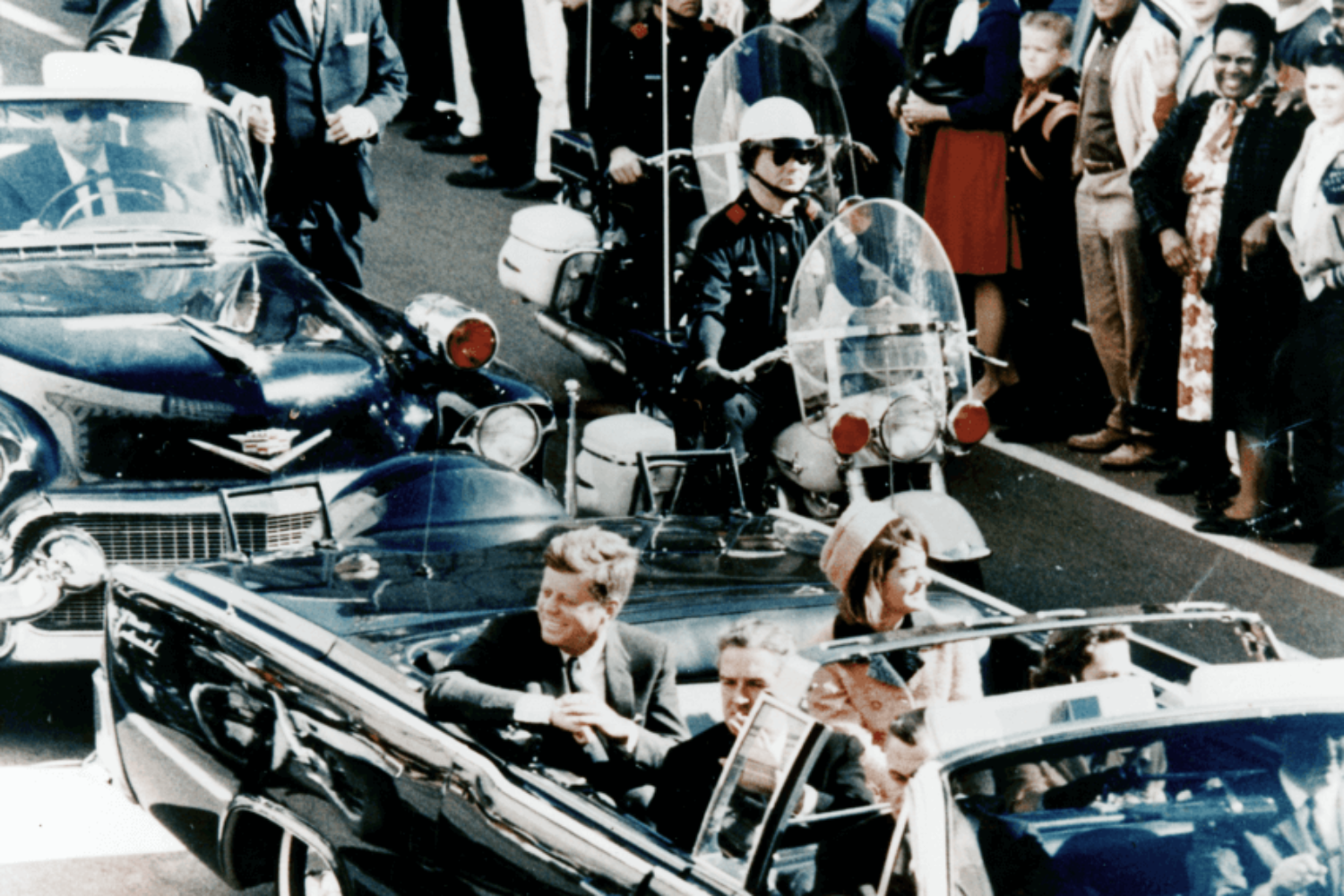 WN: As to the last line of the quote below:

In Trump’s case: He simply tells lies all the time in a bid to do what his famous predecessor says cannot be done, and does anything else he can to inflate a gargantuan ego devoid of any concern for anyone else on the planet but his truly, in which there seem to be no redeeming qualities — except he is a human being created in God’s image and loved by Christ. (OK: we Christians must “love” him too. Sigh…)

Most Americans believe in conspiracy theories. I do. I don’t buy a lot of them, but I think that Lee Harvey Oswald didn’t act alone in Dallas on Nov. 22, 1963. In my view, there’s credible evidence that Tampa, Fla., Mafia boss Santo Trafficante may have hired Oswald to fire the gun that killed President John F. Kennedy that day. And I think there was probably a conspiracy to kill his brother, Sen. Robert Kennedy, in 1968. Acoustics experts have testified that as many as 13 shots were fired at him, more than the eight rounds Sirhan Sirhan’s gun could hold.

Conspiracy theories were not prevalent in American politics until the JFK assassination, and scholars argue that they entered the U.S. cultural mainstream only in the late 20th century. Opinion polls show that conspiracy theories are believed by a wide cross-section of Americans, irrespective of race, age, sex, political affiliation, education or socio-economic status. Many historians believe this is the case because so many actual conspiracies have been uncovered at the highest levels of government since the 1960s—think MKULTRA, the Gulf of Tonkin and the 1953 Iranian coup, to name just a few.

Project MKULTRA was a CIA program wherein the agency experimented illegally on human beings without their knowledge. The program began in 1953 and was finally curtailed in 1973, according to declassified CIA records. It was concerned with “the research and development of chemical, biological and radiological materials capable of employment in clandestine operations to control human behavior.” The CIA partnered with 80 institutions and 185 private researchers¹.

The Gulf of Tonkin incident was a naval confrontation between the United States and North Vietnam in 1964, whereby the U.S. claimed that North Vietnamese torpedo boats attacked the USS Maddox. The reports led to the Gulf of Tonkin Resolution in Congress and drew the U.S. most deeply into the war. The problem was that the incident likely never took place, at least not in the way the U.S. said. But public opinion was galvanized against North Vietnam, and the U.S. quickly escalated its involvement in the war.

On Aug. 19, 1953, Mohammad Mossadegh, the democratically elected leader of Iran, was overthrown, ostensibly as part of a “popular uprising” by elements opposed to Mossadegh’s purported support for communism. In truth, elements of the CIA and the British Intelligence Service (MI-6) overthrew Mossadegh to protect the economic and business interests of the Anglo-Iranian Oil Co. It wasn’t until the CIA finally declassified documents in August 2013, a half-century after the fact, that the public finally learned definitively that “the coup was carried out under CIA direction,” and “as an act of U.S. foreign policy, conceived and approved at the highest levels of government.”

So what is a conspiracy theory? Simply put, it’s an explanation of an event or situation that invokes a conspiracy without evidence, usually involving an illegal or harmful act carried out by the government or other powerful actors. Conspiracy theories often produce hypotheses that contradict the prevailing understanding of history or simple facts.

John Kiriakou is a former CIA officer, former senior investigator for the Senate Foreign Relations Committee, and former counterterrorism consultant for ABC News. He was responsible for the capture in Pakistan in 2002 of Abu Zubaydah, then believed to be the third-ranking official in al-Qaida. In 2007, Kiriakou blew the whistle on the CIA’s torture program, telling ABC News that the CIA tortured prisoners, that torture was official U.S. government policy, and that the policy had been approved by then-President George W. Bush. He became the sixth whistleblower indicted by the Obama administration under the Espionage Act—a law designed to punish spies. He served 23 months in prison as a result of the revelation. In 2012, Kiriakou was honored with the Joe A. Callaway Award for Civic Courage, an award given to individuals who “advance truth and justice despite the personal risk it creates,” and by the inclusion of his portrait in artist Robert Shetterly’s series Americans Who Tell The Truth, which features notable truth tellers throughout American history. He was later named “Peacemaker of the Year” by the Peace and Justice Center of Sonoma County, Calif. He won the PEN Center USA’s prestigious First Amendment Award in 2015 and is the author of “The Reluctant Spy: My Secret Life in the CIA’s War on Terror.”

I get questions regularly in public forums about conspiracies related to the Sept. 11 attacks. I was at CIA headquarters in the year before 9/11 and was in the building on that morning. I was in a meeting in July 2001 in which the then-director of the CIA’s Counterterrorism Center told a group of visiting dignitaries I was showing around the building, “Something terrible is going to happen. We don’t know exactly what or where. We don’t know when. But there’s going to be an attack on an unprecedented scale.” He briefed the group on what we knew at the time about al-Qaida. “I beg you,” he continued, “if you have any sources inside al-Qaida, please help us.” I listened intently to that briefing. I had access to the intelligence.

I believed then—and I still believe—that Osama bin Laden and al-Qaida were behind the attacks. It wasn’t a “controlled detonation” carried out by the Bush family, the Rothschilds, the “Jews,” the Trilateral Commission, the Israeli government, the space aliens or anybody else. It was al-Qaida.

With that said, I would love to get to the bottom of what brought down Building 7. I don’t think it’s ever been adequately explained. And that has led to even more conspiracy theories. Building 7 was one of the buildings in the World Trade Center complex. It was hit by burning debris on the morning of the attacks, and after its south face was hit by the collapsing North Tower, Building 7 eventually came down, too.

Conspiracy theories were rampant that the CIA, the FBI, the New York Police Department, the New York Fire Department or other entities blew up the building through a “controlled demolition.” The National Institute of Standards and Technology, however, found no evidence to support the theory that the building came down as a result of explosives.

Similarly, also on Sept. 11, the Pentagon was hit by American Airlines Flight 77, resulting in the deaths of 64 people on board and 125 in the building. Conspiracy theorists claim that the building was hit by a missile, ostensibly ordered launched by then-Vice President Dick Cheney, ignoring the fact that hundreds of people on the highways around the Pentagon, including one of my best friends, watched the plane fly low over Washington Boulevard in Arlington, Va., and crash into the side of the building, and further ignoring the fact that the families of 59 passengers and crew on the plane (there were also six hijackers) had to bury their loved ones in the following days.

Conspiracy theories are popular for myriad reasons. First, they purport to explain what institutional analysis cannot, what to the rest of the world is too complicated or confusing. Second, they are simplistic and divide the world between light and dark, between good and evil. Third, they are often presented as “secret knowledge” unknown or unappreciated by others.

And that’s exactly what we’re seeing in politics today. We’ve gotten to a point where many Americans, as well as elements of the mainstream media (I’m talking about you, Fox News) treat conspiracy theories as legitimate news stories. Look at Benghazi and Pizzagate, to name two recent examples.

And that has led us to Donald Trump, a president who perpetuates conspiracy theories because it serves his purposes. Hillary Clinton ordered multiple murders to protect her official positions and the presidency of her husband, right? She ran a pedophile ring? Don’t like a story? Call it “fake news.” Don’t like the outlet where the story appears? Repeat over and over again that it’s fake news. The conspiracy theory just may stick.

Here’s a news flash: Some Americans are not very bright. They’re easily influenced. They believe that The New York Times and The Washington Post, two eminent newspapers of record, are purveyors of fake news because the president says so. The conversation ought not to be fake news. It ought to be about how we ended up with a fake president.

With that said, we can all guard against unfounded conspiracy theories. Just do your own research. Sure, there will always be incorrect stories that make their way into the media. But we have to question everything and do the research. Seek out experts. Look for competing theories, follow the facts and reach your conclusions based on the facts, not on what you read on Facebook or on some fringe message board.