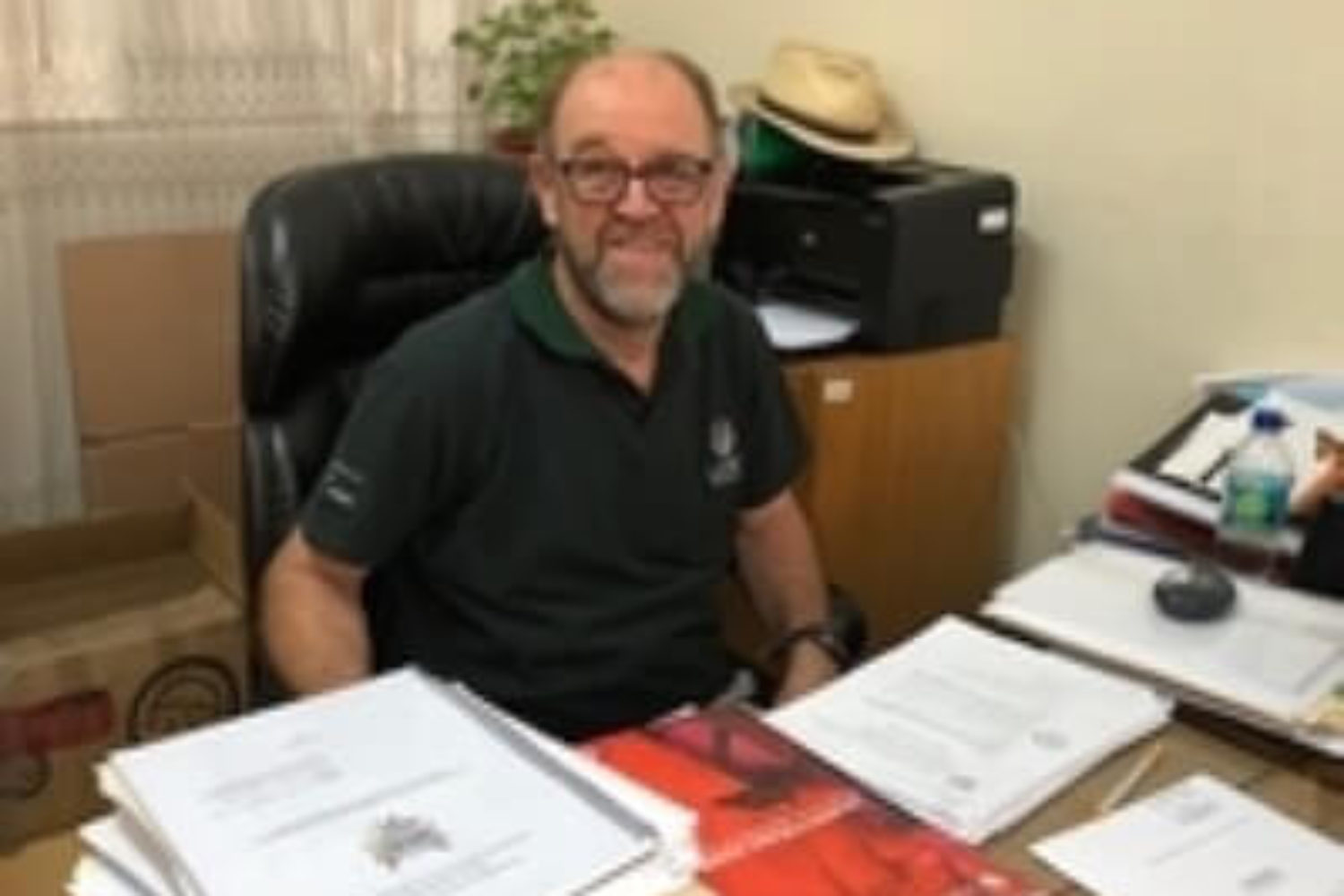 Below is the paper he presented at the Conference noted above. A  PDF version may be clicked on at the end of the article. You may also click on Restorative Justice: Rebirth of an Ancient Practice fora paper I wrote in 1994. I expand considerably on this in my Justice That Transforms book series.

After many decades as a volunteer in prison work, I am now more convinced than ever that our system does not work. It is even counterproductive. Any education or health system with a record similar to the tragic results of the prison system would have been disbanded a long time ago. How is it possible that a system produces exactly the contrary of what it was supposed to do?

The Mandela Rules state in Rule 4 that “The purposes of a sentence of imprisonment or similar measures deprivative of a person’s liberty are primarily to protect society against crime and to reduce recidivism. Those purposes can be achieved only if the period of imprisonment is used to ensure, so far as possible, the reintegration of such persons into society upon release so that they can lead a law-abiding and self-supporting life.”

In principle, this rule seems evident. In practice however, if we see the results of our system on recidivism, for example, we are still far away from its aim.

I think one of the reasons of the poor results of our prison systems is the inadequate concept of justice. In the following investigation I will present some alternatives ways to conceive justice. To this purpose I found a source of inspiration in Ancient Mesopotamian, Egyptian and Hittite law and practice.

The classical approach, led by Aristotle, states that the Law is just. Aristotle considered that the law necessarily had to be just, as it was discussed and promoted by the polis (well, actually by the free men of the polis). Consequently, for him, the law had to be just. However, we all know that the process of law making in our countries does not guarantee that the upcoming laws really are just.

Another problem is that our justice system works as – what economists call – a zero sum game. That means that what one earns, is what the other party has to come up with. The loss of one is the gain of the other. This may seem just at first glance, but it also means that the one who loses will probably try to reverse the result and appeal to recover what he has lost. The justice system designs a winner and a loser. But this does not necessarily mean that the game is over for all parties.

I think we have to reconsider our concept of justice, as presented above. I found some inspiration in ancient justice systems of the Near East. Trying to find the oldest definitions of justice, I discovered this one, by king Enmetana of Lagash (an old city state in Mesopotamia). Some 4 millennia ago (ca. 2425 BCE) he said of himself:

The king cancelled the loans because people could not pay them back. Consequently, they were enslaved till they paid back their dues. This enslavement separated the families. For Enmetana, it was more important to reunite the families than to demand the reimbursement of the loans. Later kings had a similar way of acting (VAN DER MAAT 2015:38) I wonder whether today a judge would take the same decision.

A couple of centuries later, the king of Ur (southern Mesopotamia) defined his mode of practicing justice in the following way:

This means that he did not only consider every person that came to him for justice in the same way, but that he was aware of the comparative handicap that a poor or destitute person had in a judgment against a powerful one. He took this handicap into account in order to re-establish the balance.

Mesopotamians had two different concepts of justice: Kittum and Misarum (CHARPIN, Dominique 2000: 89). On the one hand, “Kittum” considered justice as the order that had to be preserved. So, for example, loans had to be repaid, otherwise chaos would surge. On the other hand, “Misarum” conceived justice as the restoration of equity. This meant that social harmony was the goal, or social peace, as we would call it nowadays. Kittum and Missarum were always mentioned in this order, with Missarum the ultimate reference.

Still looking for the definition of justice that could help us to reconsider our own concept, I found what I consider the very best definition of justice I ever found. I first thought it was an hapax, but later on I found the same formula in other references. It seems to have been a usual definition in the tombs of judges, written on the wall so they could remember it when their own final judgment came.

Thotnakht-ánkh, a judge from the 11th Dynasty, around the 20 th century BCE, confesses that:

Ma’at was the goddess of judgment and harmony (represented with an ostrich plume on her head).  She was the guarantee of order. Judging according to Ma’at meant restoring harmony that had been broken by the offense. Ancient Egypt did not seem to have written codes. The idea of justice was to heal the wounds inflicted on the community by restoring Ma’at, in order to evict Ifset (chaos).

What I highlight in this definition of justice is that both parties walked away with a peaceful heart. How many judgments today achieve this? To restore peace in the community, this is exactly what justice is about. Justice is not about sending people to prison, but about rebuilding a peaceful community.

Trying to summarize, one could state that Ancient Justice is primarily related to establishing or restoring social harmony rather than (just) applying the law. This is not achieved when the law has determined the winner and the loser, but when all parties are reconciled with one another. For this, it is necessary to recognize that a dispute between two parties reaches far across their own interests and affects the community.

Our conception that justice means the application of the law is contrary to a Hittite case, where the victim could override the judiciary system and spare the perpetrators (VAN DER MAAT 2015:66-80). This was the case when a man found his wife with a lover. The law stated that both (woman and lover) had to be killed. However, the man could spare his wife (and her lover), overriding the law. Even the king (the supreme judge) had to respect the will of the victim.

In a certain way, the offenders were at the mercy of the victim, who could decide to apply the law (death penalty) or show mercy. But the victim could not demand a tougher punishment than what the law had foreseen.

The Middle Assyrian Law presents similar cases (VAN DER MAAT 2015: 80-87). I think that this case of the subsidiarity of the law and of the justice system can help us to conceive our justice in another way. The victim has something to say in the process. How many times does it occur that the victim is not interested in having the offender shut up in a prison, because that does not help him to recover his peace. Restorative Justice is just about restoring peace, with the help of victim, the offender, and the community. If the judiciary system is considered subsidiary, then the justice officials (judge, prosecutor, lawyers) can help to guarantee a fair judiciary process where the victim and the offender can work out a satisfactory solution, together with the community.

Our criminal justice system usually determines who is the victimizer, and who the victim; the offender is then sent to prison and the victim can go back home. If the victim wants to get back what has been taken from him, he usually has to start another (civil) procedure. This means that our system considers that justice is done when the offender has been identified and sentenced.

Usually a victim does not get back what has been taken from him. In ancient justice systems, that would have been considered unjust. A just compensation was foreseen in case of an offense. The Hittite laws stated:

“If anyone injures a person and temporarily incapacitates him, he shall provide medical care for him. In his place he shall provide a person to work on his estate until he recovers. When he recovers, his assailant shall pay him 6 shekels of silver and shall pay the physician’s fee as well.” Hittite Law 9 [ROTH (1995:218); FRIEDRICH (1959:19)]

This law foresees a compensation for the victim. Justice is attained, not by sending the offender to prison, but by making him (re)pay for what he has done. He has to compensate not only the medical recovery of the victim, but he also has to pay for the replacement of the victim in his work. The victim’s family cannot wait till the victim has recovered, so someone must replace the victim in his work, in order that the family can go on living. This compensation is vital, and does not exist in our justice systems, at least not without another judiciary procedure. In this case, if he receives this kind of compensation, the victim will probably agree on the sentence and the community will go on in harmony.

A similar case can be found in another source, of much later date, namely the Babylon Talmud. This states that one who wounds his neighbour is liable to pay the following five things, viz.: damage, pain, healing, loss of time, and disgrace. Each item has its explanation:

“Damage: If he blinds one’s eye, cuts off his hand, or breaks his leg, the injured person is considered as if he were a slave sold in the market, and he is appraised at his former and his present value.

Pain: If he burns him with a spit or with a nail, if even only on the nail (of his hand or foot), where it produces no wound, it is appraised how much a man his equal would take to suffer such pain.

Loss of time: The injured person is considered as if were a watchman of a pumpkin field, as he was already paid the value of his hand or foot.

The disgrace is appraised with consideration of the station and rank of the one who causes as well as of the one who suffers it. ” [Talmud Babli – Baba Qama VIII]

This is another way of calculating the compensation due after an offense has been committed. These examples can help us to consider other ways than just prison sentences and money to compensate a victim and restore justice.

I have tried to shed new light on our justice system by using (very) ancient practices, from some millennia ago in Mesopotamian, Egyptian and Hittite contexts. These examples are not given here to be copied, but to inspire us in our quest for a more human, efficient and affordable justice.

KITCHEN, Kenneth A.; LAWRENCE, Paul J.N. (2012) Treaty, Law and Covenant in the Ancient Near East. Part I. The Texts, Wiesbaden, Harrassowitz Verlag.