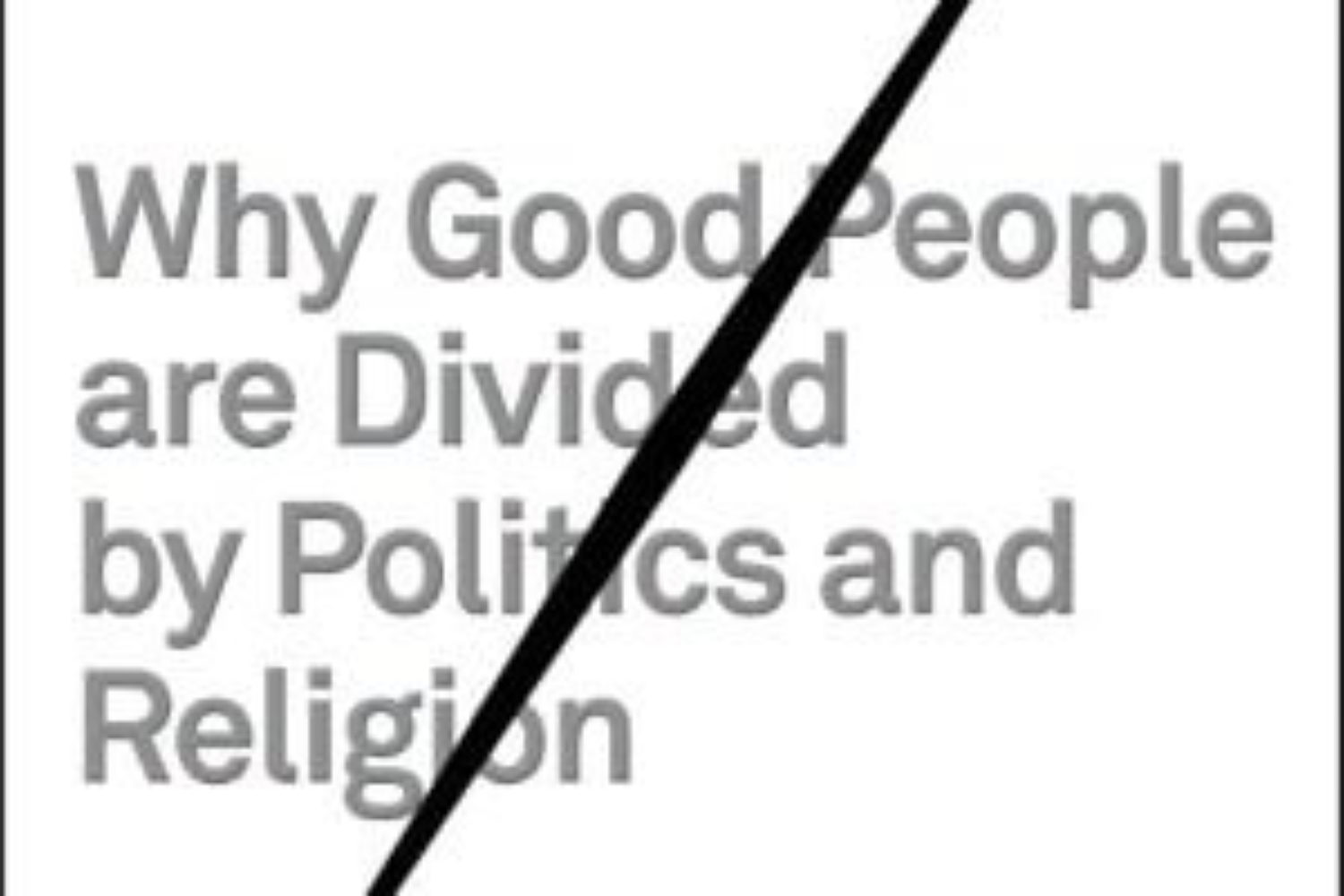 Below is one fairly detailed review of the book  The Righteous Mind: Why Good People Are Divided by Politics and Religion, by Jonathan Haidt, recommended by Russell Moore, whose October 23, 2016 talk on religious conservatives’ need to get back to the Gospel is elsewhere on this site. This review is on the Goodreads site.

Nov 06, 2014 Clif Hostetler rated it it was amazing  ·  review of another edition

I was hopeful this book might provide me with some sociological tools and rhetorical tricks to clear away the views of those who disagree with my positions on politics and religion. Of course this book does not deliver on this unrealistic hope. What the book does provide instead is an explanation why not everybody agrees with my definition of morality. This knowledge does not make disagreements go away, so the best I can hope for after reading this book is to comprehend the intuitive motivations of both myself and others, and then comprehend why those motivations can lead to morals that steer reasoning to opposite conclusions.

The author, Jonathan Haidt, is a psychologist who has specialized on the nature of morals. This book could have been more accurately titled “The Moral Mind.” The book is divided into three parts. The main point of the first part is what Haidt calls the first principle of moral psychology: Intuitions come first, strategic reasoning second. The second part of the book explores the second principle of moral psychology: There’s more to morality than harm and fairness. The third part presented the principle that morality binds and blinds.

This author weaves together a history of moral psychology and the author’s own story to create a sense of movement from rationalism to intuitionism. The author throws in historical anecdotes, quotations from the ancients, and praise of a few visionaries. The author then set up metaphors (such as the rider and the elephant) that recur throughout the book. He then discusses the evidence to “tune up” the reader’s intuitions about moral psychology.

The message here is that value judgments are seldom products of rational deliberation. We are hardwired by evolution to function first with our emotional brain at an intuitive level, and what follows may claim to be rational reasoning that explains our judgment but is actually rationalization of quick intuitive decisions. The inherited human brain is also social in nature and must exhibit behavior that is compliant with a person’s social environment (i.e. group or tribe). This explains why people don’t necessarily vote for their own self interests. Instead they vote in compliance with the values and belief system of the group they most closely associate with.

The main point of this section of the book is that conservatives base their morality on six types of considerations or value judgments: care/harm, liberty/oppression, fairness/cheating, loyalty/betrayal, authority/subversion, and sanctity/degradation. Liberals base their morality on three areas: care/harm, liberty/oppression, and fairness/cheating. Haidt says this gives conservatives an advantage when campaigning for votes because they can appeal to their supporters in six ways and liberals can appeal to only three.

Haidt in this section drives home the point that the tendency for humans to form morals has been ingrained into humans by evolution. Humans are products of multilevel selection, which made us both selfish and groupish. Haidt describes it as being 90 percent chimp and 10 percent bee. He suggests that religion played a crucial role in our evolutionary history–our religious minds co-evolved with our religious practices to create ever larger moral communities, particularly after the advent of agriculture.

Quotations of Interest to Me

“In a study I did with Jesse Graham and Brian Nosek, we tested how well liberals and conservatives could understand each other. We asked more than two thousand American visitors to fill out the moral Foundations Questionnaire. One-third of the time they were asked to fill it out normally, answering as themselves. One-third of the time they were asked to fill it out as they think a “typical liberal” would respond. One-third of the time they were asked to fill it out as a “typical conservative” would respond. This design allowed us to examine the stereotypes that each side held about the other. More important, it allowed us to asses how accurate they were by comparing people’s expectations about “typical” partisans to the actual responses from partisans of the left and the right. Who was best able to pretend to be the other?
The results were clear and consistent. Moderates and conservatives were most accurate in their predictions, whether they were pretending to be liberals or conservatives. Liberals were the least accurate, especially those who described themselves as “very liberal.” The biggest errors in the whole study came when liberals answered the Care and Fairness questions while pretending to be conservatives. When faced with questions such as “One of the worst things a person could do is hurt a defenseless animal” or Justice is the most important requirement for a society,” liberals assumed that conservatives would disagree.”

The following quotation is not really part of the main focus of this book, but I found it interesting because it illuminates an irony about many Christians who emphasize “correct belief” (i.e. orthodoxy) whereas modern polling shows “correct belief” not to be a reliable predictor of neighborliness and good citizenship. Haidt is quoting from Putnam and Campbell’s 2010 book, American Grace: How Religion Divides and Unites Us.

“Why are religious people better neighbors and citizens? To find out, Putnam and Campbell included on one of their surveys a long list of questions about religious beliefs (e.g., “Do you believe in hell? Do you agree that we will all be called before God to answer for our sins?”) as well as questions about religious practices (e.g., “How often do you read holy scriptures? How often do you pray?) These beliefs and practices turned out to matter very little. Whether you believe in hell, whether you pray daily, whether you are a Catholic, Protestant, Jew, or Mormon … none of these things correlated with generosity. The only thing that was reliable and powerfully associated with the moral benefits of religion was how enmeshed people were in relationships with their co-religionists.It’s the friendships and groups activities, carried out within a moral matrix that emphasizes selflessness. That’s what brings out the best in people.
Putnam and Campbell reject the New Atheist emphasis on belief and reach a conclusion straight out of Durkheim: “It is religious belongingness that matters for neighborliness, not religious believing.”

The following is Haidt’s definition of moral systems:

This definition makes morals dependent on the social environment. There is no one single definition of morality that is true in all cultures.

Some Links of Interest

The following links came from the Book’s Website.
Here is a pdf file of Chapter 9, the chapter on multi-level selection.
Here is a pdf file with all figures and images from all chapters
Here is a pdf file will all of the references (the bibliography)
Here is a pdf file with all of the end notes
You can read the introduction to the book here, and you can read a condensed version of Ch. 12 (on politics and polarization) at Reason Magazine.
Here is a summary/outline of the book, with interesting comments and links, from Jan C. Hardenbergh
Here is the out take from ch. 6 on Virtue Ethics, as referred to in Haidt’s NYT Stone essay
_________________
The following short review of this book is from the PageADay Book Lover’s Calendar for November 28, 2014:
Hopefully, you managed to avoid talking politics during yesterday’s feast. Unfortunately, it’s much harder to ignore the antagonism of the larger political sphere. At the heart of our irritation and often outrage toward other people’s belief systems is a lack of understanding. In this cogent, thought provoking book, Jonathan Haidt not only explains the psychological and moral bases of various belief systems, but he also goes on to propose viable bridges among them. It’s heartening to imagine that the national discourse could one day learn from his example.
The Righteous Mind: Why Good People Are Divided by Politics and Religion, by Jonathan Haidt (Pantheon, 2012)