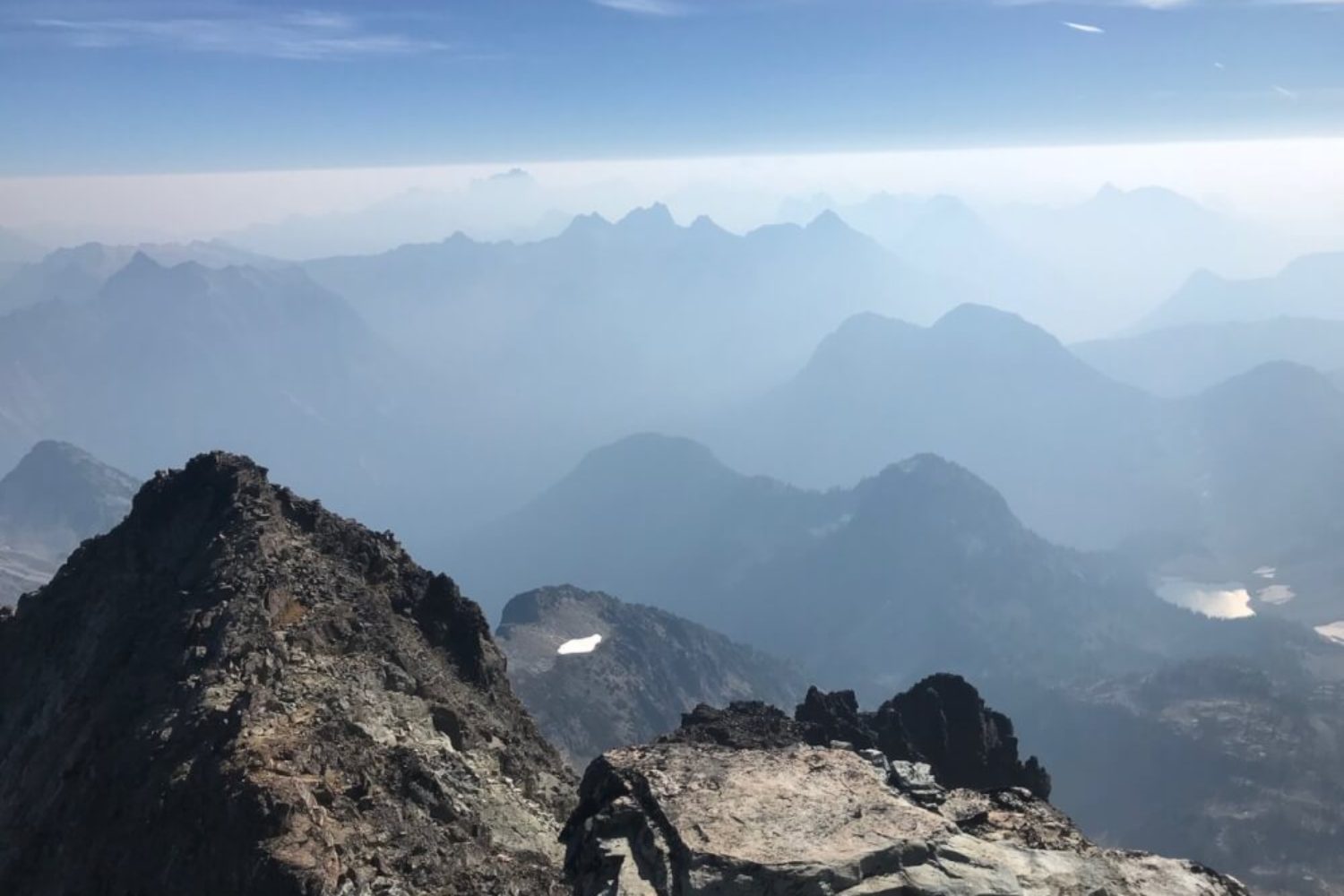 photo above: Smoke from wildfires in British Columbia, Eastern Washington and Montana enshrouds the Cascade Mountains of Washington State. In the Pacific Northwest, experiencing weeks on end of wildfire smoke during the summer months has become the “new normal.” Dahr Jamail

WN: The author updates readers regularly about ACD – Anthropogenic Climate Disruption. We in fact live in his neighbourhood, on the Canadian side of the Cascades that we overlook. We also experienced the days-on-end haze and were told the air quality in our part of British Columbia was worse than in Beijing…

Are we doomed on this Planet? Even to ask it sends chills down the spine…

What should one do? Please read on1.

In one of the more important recent scientific studies, published in the journal Science, researchers warn that ACD could cause many of the planet’s ecosystems to become unrecognizable.

“Our results indicate that terrestrial ecosystems are highly sensitive to temperature change and suggest that, without major reductions in greenhouse gas emissions to the atmosphere, terrestrial ecosystems worldwide are at risk of major transformation, with accompanying disruption of ecosystem services and impacts on biodiversity,” reads the abstract of the study.

Stephen Jackson, the lead author of the study, told The Washington Post, “Even as someone who has spent more than 40 years thinking about vegetation change looking into the past … it is really hard for me to wrap my mind around the magnitude of change we’re talking about.”

Existential Climate Risk by Australian researchers with the independent think tank National Centre for Climate Restoration, is blunt about the fact that we are rapidly leaving the safe zone for human habitability on the planet. They note that ACD poses an “existential risk to human civilization,” with dire consequences unless dramatic actions are taken toward mitigation. The paper also points out how climate research, including the work of the Intergovernmental Panel on Climate Change (IPCC), has consistently underplayed these risks and leaned towards conservative projections. The paper even goes on to call the IPCC “dangerously misleading” regarding its low-ball predictions of accelerating ACD.

“Climate change is now reaching the end-game,” the foreword to the report reads, “where very soon humanity must choose between taking unprecedented action, or accepting that it has been left too late and bear the consequences.”

One only need look at this past summer to see that we have, indeed, reached the end-game.

On the reality front, the State of California recently passed legislation, including steps to take to make it happen, geared toward the cessation of using fossil fuels to generate electricity by the year 2045.

Yale’s climate change communication program released an up-to-date visualization showing that the vast majority of Americans believe ACD is real, as well as a graphic that enables one to focus in on the parts of the country where willful ignorance is the most rampant.

Things are already dire enough that several countries in the Caribbean recently pleaded with the Trump administration to grasp the dire threats that accompany ACD and do something about it. So far, of course, their pleas have not been answered with action.

An important article published in The Tyee, citing recently published research warns, “If we can’t stop hothouse Earth, we’d better learn to live on it,” with the subheading: “New research is warning that we face a desperate global struggle.”

A fascinating graphic was also published by The Revelator, which provides an interactive map you can use to zoom in on where you live to see how much your temperatures will increase by the year 2050. I strongly recommend looking at the map, paying particular attention to the US Midwest, given the realities of crop loss and decreasing nutrition in crops.

To conclude this month’s dispatch, a UN official recently announced that governments are “not on track” to cap global temperatures to below 2°C, the goal of the 2015 Paris climate talks. Many scientists have long warned that a 1°C warming was already enough to lock in catastrophic ACD impacts. We are already over 1°C. The ongoing failure of the world’s governments to face these facts guarantees a lasting and devastating impact for all species on Earth, including humans.

Like Loading...
as the Climate “End Game” Has Arrived, Brace for Impact, dire warnings on all fronts, governments not doing enough