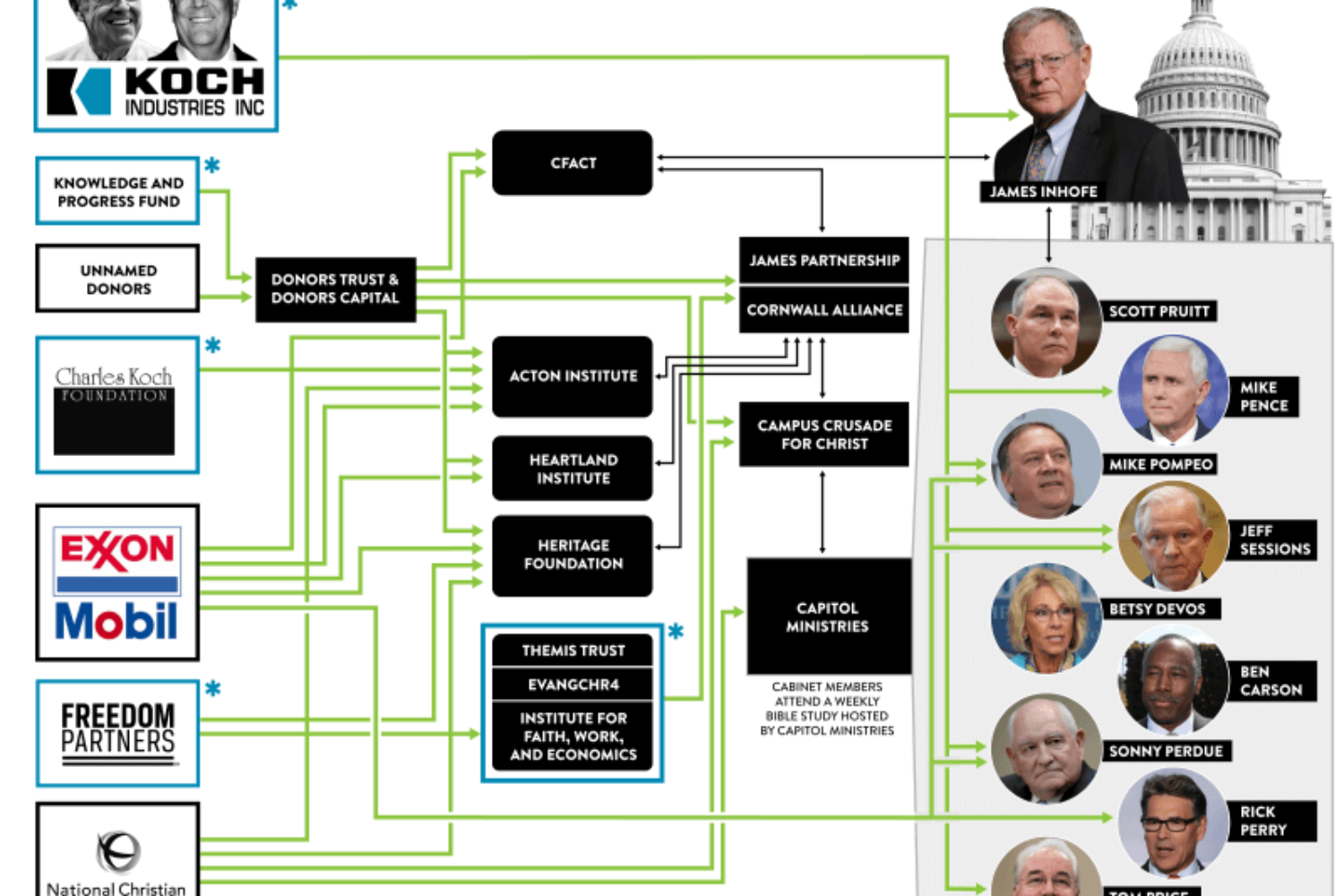 chart above: How Fossil Fuel Money Made Climate Change Denial the Word of God

WN: Sadly, faith and politics have been a toxic mix that has led to enormous denialism (like Holocaust deniers) in the Plymouth Brethren/evangelical communities Hayhoe was raised in. Her appeal to Christians to embrace what Catholics call “a preferential option for the poor” is to be noted over against for instance the depiction of evangelical deniers in this article: “How Fossil Fuel Money Made Climate Change Denial the Word of God“.

A recent interview, “‘This is not going to end well’: Author Barbara Kingsolver on climate change“, by Anna Maria Tremonti on The Current program (CBC – Canadian Broadcasting Commission) underscores the dire emergency. In it we learn that annually now, we humans voraciously use 125% of the earth’s resources. This is utterly unsustainable – and will have catastrophic consequences on just about every scale, from continuing extreme climate blow-outs to gargantuan flooding of coastal cities to greatly exacerbated international conflicts, amongst other disasters.

May conferences and presentations multiply in Christian communities such as the recent conference I attended, “A Sacramental Approach to Ecology” (Trinity Western University – contact: Chris.Morrissey@twu.ca) – that help change the tide of Christian opinion, and motivate to urgent prayer and action! May God have mercy.

Finally, please read below the Joint Message by Pope Francis and Patriarch Bartholomew:

The story of creation presents us with a panoramic view of the world. Scripture reveals that, “in the beginning”, God intended humanity to cooperate in the preservation and protection of the natural environment. At first, as we read in Genesis, “no plant of the field was yet in the earth and no herb of the field had yet sprung up – for the Lord God had not caused it to rain upon the earth, and there was no one to till the ground” (2:5). The earth was entrusted to us as a sublime gift and legacy, for which all of us share responsibility until, “in the end”, all things in heaven and on earth will be restored in Christ (cf. Eph 1:10). Our human dignity and welfare are deeply connected to our care for the whole of creation.

However, “in the meantime”, the history of the world presents a very different context. It reveals a morally decaying scenario where our attitude and behaviour towards creation obscures our calling as God’s co-operators. Our propensity to interrupt the world’s delicate and balanced ecosystems, our insatiable desire to manipulate and control the planet’s limited resources, and our greed for limitless profit in markets – all these have alienated us from the original purpose of creation. We no longer respect nature as a shared gift; instead, we regard it as a private possession. We no longer associate with nature in order to sustain it; instead, we lord over it to support our own constructs.

The consequences of this alternative worldview are tragic and lasting. The human environment and the natural environment are deteriorating together, and this deterioration of the planet weighs upon the most vulnerable of its people. The impact of climate change affects, first and foremost, those who live in poverty in every corner of the globe. Our obligation to use the earth’s goods responsibly implies the recognition of and respect for all people and all living creatures. The urgent call and challenge to care for creation are an invitation for all of humanity to work towards sustainable and integral development.

Therefore, united by the same concern for God’s creation and acknowledging the earth as a shared good, we fervently invite all people of goodwill to dedicate a time of prayer for the environment on 1 September.  On this occasion, we wish to offer thanks to the loving Creator for the noble gift of creation and to pledge commitment to its care and preservation for the sake of future generations. After all, we know that we labour in vain if the Lord is not by our side (cf. Ps 126-127), if prayer is not at the centre of our reflection and celebration. Indeed, an objective of our prayer is to change the way we perceive the world in order to change the way we relate to the world. The goal of our promise is to be courageous in embracing greater simplicity and solidarity in our lives.

We urgently appeal to those in positions of social and economic, as well as political and cultural, responsibility to hear the cry of the earth and to attend to the needs of the marginalized, but above all to respond to the plea of millions and support the consensus of the world for the healing of our wounded creation. We are convinced that there can be no sincere and enduring resolution to the challenge of the ecological crisis and climate change unless the response is concerted and collective, unless the responsibility is shared and accountable, unless we give priority to solidarity and service.

From the Vatican and from the Phanar, 1 September 2017

Having been influenced by many of her family forebears to appreciate nature and the need for people to care for it, Hayhoe entered the climate change field, recognizing it carries “a lot of baggage.”

Much of that baggage revolves around political and religious polarization on the issue, particularly in some parts of the United States. In a PBS interview with Bill Moyers, she spoke about the emphasis many pastors in drought-ridden West Texas have, simply, on “praying for rain.” They do so, she suggested, without recognizing the role human-related climate change might have on their predicament.

During the Bill Moyers interview she said:

Caring about climate is entirely consistent with who we are as Christians. But over the last several decades . . . we have increasingly begun to confound our politics with our faith. To the point where instead of our faith dictating our attitudes on political and social issues, we are instead allowing our political party to dictate our attitude on issues that are clearly consistent with who we are. . . .

Climate change is a casualty of much larger societal issues. If we can get past the issue of rhetoric and politics, and actually start talking about what’s in our hearts, I have seen amazing things happen in terms of moving forward to look at solutions that are consistent with the values that we have.

Hayhoe has built her influence in the faith-science discussion, in part, by declining to participate in combative media debates that pit pro- and anti-climate changers with each other. She is mildly but clearly critical of people who view climate science sceptically from a conservative perspective and choose to stand apart from the discussion, throwing stones, so to speak, at those who differ. Conservatives, in their own right have valid perspectives, she said, adding that they need to bring those perspectives to the discussion table, rather than lobbing them from beyond the rim.

In fact, she points to a group with which she readily identifies, which has a growing presence in Canada, Citizen’s Climate Lobby. The website for that group contains a strategic guide which summarizes the approach Hayhoe tries to follow in acquainting people who might otherwise be ‘enemies’ with facts and information about climate science.

In our interview, Hayhoe made three points for consideration.

In the months following our interview, Hayhoe lectured at several other Canadian colleges and universities, many of them Christian – including Regent College.

And two accounts of her work, one published two years ago in Maclean’s Magazine and the other, this past summer, in Journal of Geoscience Education, update what has been happening since 2014.

Authored by Charlie Gillis, the November 9, 2015 Maclean’s piece was entitled “One Canadian’s quest to use Scripture to help sell climate science: White evangelical Protestants are the group least like to believe in climate change. So in America, Katharine Hayhoe is setting out to change that.”

In the process of telling her faith-science narrative, Gillis laid out Hayhoe’s credentials in the climate science field. He noted:

The 43 year old PhD made her name building localized statistical models (“downscaling,” in the argot of her field), which governments from California to Massachusetts use to prepare for a future onslaught of drought, or unprecedented rainfall. She currently heads up the Climate Science Center of Texas Tech University in Lubbock, and has contributed to reports of the Intergovernmental Panel on Climate Change that won the 2007 Nobel Peace Prize. Later this month, she’ll appear at the UN Climate Change Conference in Paris on behalf of the Union of Concerned Scientists, a 46 year old organization devoted to promoting a healthier, safer planet. [For the record, she did appear and continues to be interviewed widely on the basis of her exposure there.]